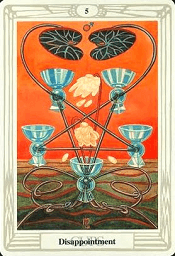 I. Analyze and describe 5 of Cups Thoth Tarot

On the card, the stream of water is dry, the sea is exhausted and the crystal cups are empty. We see ourselves in despair, the picture reflects feelings of disappointment and loneliness filled with gloom. The Scorpion, related to this card, evokes “the worst aspect, the rotting ability of Water” (Crowley) and thus, the alchemist of the dynamic transformation, at an unspecified time, is once again developed (lotus roots curl into butterfly wings, the symbol for transforming into a more advanced form). However, the card first marks the beginning of the decline. 5 cups form an inverted pentagon, symbolizing the victory of matter versus spirit.

The connection with the archetypal feminine is lost, and the previous female reproductive capacity has become dry. The dry stream shows the cruelty of the inner emotional world, depleted water indicates a decline.

This card can be interpreted as an exercise of unconscious negative wishes. No matter how frightening destruction is, it is never meaningless because it always responds to the consistency of the process, which will ultimately lead to the construction of more solid structures. However, it also makes us understand that where our emotional nature is most disturbed is where we can replace it with the reasonably controlled mind; the stream of life dried up after that and the splendor of the past was now dried up and turned into dust.

This card represents frustration and suffering before a failed project. It may be that we do not pass the exam, the application is rejected, or the business negotiation that we put our faith in has failed. In this relationship, we may be very tired to consider whether our goals and action processes are in harmony with the basic principles, whether they are inadequate, or they may be vague and questionable.

This card represents frustration, sorrow, and despair; the old wound opened again, the old pain that we thought had passed long ago woke up. Streams dried up and emotions were smashed. However, in the unconscious still sprouting new hope because, in the dried lotus root, there is a butterfly, the symbol of transformation and renewal, forming.

Green cup = water has evaporated, we have not received any interest from the investment we have made.

Reversed Pentagram = spirit is burdened by material (the world) = things in our mundane emotional life are overwhelming us at the present time.

Dry lotus/Arid background = we feel emotionally empty, nothing grows in us, and we feel stuck, unable to express ourselves and what we feel.

V. 5 of Cups Thoth card in the upright and reverse

5 of Cups represents incomplete or unsuccessful results. You are feeling frustrated by a situation that does not happen as you wish, and instead of turning to new and better experiences, you are immersed in pity and regret about your expectations that have been let down.

You are quickly becoming disillusioned with your life and your future ahead.

If you feel frustrated by another person’s action, find it in your inner heart to forgive that person and give up the disappointment. You may also need to reevaluate the expectations that have led you to this disappointment. Did you expect too much from someone?

All of the above, but taking longer, with the intensity of Mars and Scorpions playing their role in the profound sense of unsatisfactory expectations and lifestyles.