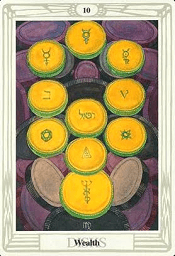 Wealth – The power of prosperity

I. Analyze and describe 10 of Disks Thoth Tarot

This card shows that the ten disks are like coins displayed in the structure of the Tree of Life, and thereby, implies that they are part of a larger and organized entity. As the last card in all of the cards of the Minor Arcana, it describes the results of continuous development, the original energy of God manifested in Material (Crowley). This process begins with the Ace of Wands Thoth card, its ten flames are also arranged in the form of the Tree of Life. The symbols on the coins are the magic signs corresponding to the qualities of the ten archetypal principles that formed the Tree of Life.

This card represents the material results from the creative impulse started in the Ace of Wands Thoth card, and the ten coins represent human values on the path to fullness because they are the sources of creative energy that condense into physical form. Ace of Wands Thoth card is the seed in which this card lived. The time required for it to germinate into the matter is the path that humanity chooses to formulate its sense of contribution in the immense power of the infinite spirit.

This card corresponds to our emotional sensitivity, thereby recognizing the inner creative nature of the external treasure. It only happens when we feel that we are part of the infinite and perfect spirit and that everything that has been created exists in perfection and does not need our help, that we have been liberated from “possession for the sake of pleasure” in order to enrich the interior. Like a puzzle game, opportunities appear clearly when the parts of the department are suddenly considered belonging together and combine into a larger vision. This leads to the formation of a sense of our inner creative plan.

This card means that we can also achieve something in daily life through thoughtful attention that is different from before by experiencing it as a source of inner enrichment (Gurdjieff method). The card implies job security, worthwhile goals, favorable transactions, good payments, the success which is both idealistic and materialistic.

The richness of this card is about a lovely time when many aspects of our relationship experience joy and pleasure; exactly they are the subtle aspects of inner richness that have a special meaning: it helps us to recognize small gestures and things that we have not (or no longer) received due to our habits or blindness.

Disks: All have symbols of Mercury in some form except 8th Sephiroth.

Chockmah = symbols of the planets unified in mercury.

Binah = Mercury and the Tree of Life (there are spheres in the glyph representing sephira).

Chesed = The Enochian letter Pe corresponding to the letter B in English = Beth = Magus which is ruled by Mercury.

Tiphareth = Hebrew for “Raphael”, the Archangel of Tiphareth and the Angel of Mercury.

64 = number of squares in the magic square.

260  = sum of numbers in any row, column or diagonal line in the magic square.

10 Malkuth = staph with 3 mother letters of the Hebrew alphabet, Shin, Aleph, and Mem. It signifies the caduceus of Mercury.

Large 10th Coin = when money becomes too important (too big) in someone’s life, it loses its value and becomes a burden. The energy of it overtakes us. This oversized sephirah represents the stagnation of energy that remains having passed through the other sephira on the Tree of life. It is rather like a stagnant cesspool!

The energy is regenerated through Thoth-Hermes-Mercury – The Magician (joining Kether to Binah).

Sun in 8th Coin = Intelligence needed for the energy to regenerate out of the restrictions, supplying Mercury with the inspiration and energy to renew the creative cycle.

V. 10 of Disks Thoth card in the upright and reverse

The richness and material wealth (sometimes to the extent that they lose importance).

A person has accumulated material wealth but nothing else; barren spirituality.

Wealth can be lost unless applied in a constructive way because energy needs to move (as indicated in the card’s philosophy).

Do we have friends hows lives may benefit from us helping them financially in some way?

Do we have friends whose lives can benefit from our financial support in some way?

Therefore, this card generally may represent either high energy card or low energy. On the positive side, the wealth we create can be best used in meaningful ways around the world, applying the skills we have used to get us there.

Alternatively, it becomes a low energy card if we do not apply our resources in the best way and therefore, we are stagnant.