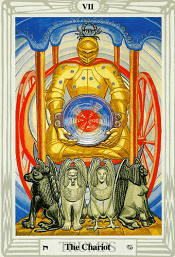 I. Background of the Chariot Thoth Tarot card

The Chariot Thoth Tarot card shows us an Ophiuchus in golden armor, focusing on the inner self in the meditation posture (Yoga posture). The full power of this card, extremely striking when looking at it, seems to come to silence beneath a closer examination. However, underneath the stillness, there still an expression of great potential power. It is a peaceful source of strength accumulated within and around its center, which helps explain the external state of tranquility: the attraction of eternity (concentric circles in context), merging people and their entire activity into the positive plan of creation and obtaining its micro-equivalence in the permanent rotation of the Holy Grail in the mind of the Ophiuchus.

Huge red wheels are a symbol of pure intentional action (I want!), involving a person’s motivation to act. The four pillars that make the green roof (related to the night sky) originate from the old view of the world that they are supporting the sky, as well as the animals outlined below, which are the four guards of heaven in the shape of little angels. This also shows that the movement inside the card has a wide range and follows all directions of the sky. Then, it relates to the task of mankind which is to create ground subjects.

The hero, who opened his eyes inwardly, was holding the Cup towards the observer. At that time, both of them (the golden Knight is the mirror image of the observer) are given the opportunity to gain emotion for the power of the center.

The Ophiuchus is concentrating and meditating inside his massive golden armor that embodies the image of a holy warrior (samurai), manifested through the power of concentration (Chi) rather than muscle strength. However, the chariot stood still. Ophiuchus sat still on his chariot and focused on the inner core, portrayed by the Holy Grail. Crowley writes:

The Ophiuchus wear an amber-colored armor which is suitable for the symbol. The mask of the helmet was pulled down so no one could see his face. For the same reason, none of his body parts was revealed. He sat still on the chariot instead of directing it because the entire operating system was in perfect balance. His only role is to keep the Holy Grail.

According to Crowley, the roof “carries the blue of Binah’s night sky”, denoting the outfit of the Dark Night Goddess, like Maria (also wearing this outfit) or the High Priestess, which is also a side of the Great Goddess. The Cancer Zodiac connects the Chariot Thoth Tarot to the High Priestess through the Moon, “attached to his armor is the 10 Stars of Assiah, the dewdrops of heaven that he inherits from his mother” (Crowley).

The son of the Great Goddess has always been the one who saved the human race. The four pillars of paradise – the former four angels – who guard the four ends of the world, show their profound influence on the world. He is an innovator, who brings a message of salvation, as Buddha said, “Life is suffering”, and then emphasizes that, “but there is a way to get rid of suffering!”.

Endlessness – continuous flow without beginning or ending, does not show us a harmonious flow of endless profoundness, but a gradual expansion of concentric circles representing the dynamics of eternity. This is not an “outside of space” hovering but the feeling of being pushed forward by waves of time in the strait of metaphoric imagination. The Chariot Thoth Tarot often gives us the feeling of being pulled away by the power of the Universe because Chariot refers to actions that go ahead, even when it is still standing.

This flow of power is described by a horizontal-direct axis (target in the middle is the center of the circle in the background). This effect is achieved by a mindful way of paying attention of the Cup that the Knight is holding forward. The item on the disk he was holding in his hand was the Cup, deep within it, the heart of the scene was spinning like a red sun.

In response to his definitive question, “Who does the cup serve?”, Parcival received the answer, “The cup serving the Lord!” (King of Gail). So, it is a symbol of eternal strength flowing within us, and the search for the cup is the image of seeking the Higher Self. The axis of imagination, running from the center of the cup through the midpoint of Ophiuchus’s body to the midpoint of the cosmic circle, represents the person who has found harmony with the Higher Self in his center.

a. The prophecy of black Sphinxes

Black Sphinxes represent the melancholy side of the spirit because they have turned their backs on life and blocked the path. Their gaze was directed at utopian things, and their language beyond the edge of this world. Their prophecy is:

We are images that represent only one image, and no concept can express the concept of utopian things. No concept can capture more than one part of that reality, which is the concept of itself. Then, no concept is likely to prove that practical part because it does not reflect the concept. A thought captures only that part of reality, which is inside its own perception. Everything you perceive as the truth is just the self-reflection in perception.

b. The prophecy of white Sphinxes

The white Sphinxes manifest themselves to the bright side, facing towards life (they look directly at the observer’s eyes). However, even though their light is equal to the darkness of the other two, they belong to each other and are inseparable because the harmony of both parts is necessary to determine the path of the hero. Their prophecy is:

What we face when we look into your eyes is what “God” feels. And at the same time, the dissolution and dedication to the whole Universe when we feel “the self”; the nature of something that can avoid all understanding, but still look at us with the eyes of every creature, and those creatures also look directly into our eyes – that is us: freedom from being responsible for oneself! Only freedom. Not the way. You must walk on it yourself!

The Chariot Thoth Tarot represents the strength gathered to prepare to jump a great step forward. It shows that we are separating ourselves from the familiar things around to walk our path. The power to control the chariot is the desire to have freedom, ambition, search for a lost paradise, or simply our recognized needs.

The winner’s chariot represents not only the power of stepping forward and advancing but also the skill of the Ophiuchus in maintaining the internal and external balance. The hero and the chariot are all aiming for an external point (“desire”) while the Holy Grail and the context represent the inner goal (emotion); thus, we see how well this connection works when the center of desire is in harmony with the High Self.

2. Overview of the Chariot Thoth Tarot

Chariot represents a renunciation, though still immature but full of confidence, conceived concepts, the development of concepts of the world to better suit one’s self, and the smart progress in digging into difficult problems. This often is a matter of overcoming internal contradictions, such as the abyss between emotion and reason, will and instinct, desire and reality.

This challenge becomes more evident when it comes to questions about self-awareness. The symbolism of the Holy Cup became the focus here. It is a symbol of wholeness, which – according to Mythological lessons – alluding to go beyond us to God. This result is used in the search for the best and shows that the path there does not lead to devotion, run away from reality, or wise intelligence. Instead, it was the path of the warrior – a divine warrior who directed his common power to the goal and followed his path with perseverance.

The Chariot Thoth Tarot card may also contain a warning: the self needs to be developed before following the path in order to overcome the ego. This is often overlooked, so many people believe that the path to enlightenment lies in avoiding the ego. However, when the ego is too weak to be fed up with a divine ego, a catastrophe will occur: an exaggerated ego or a deep hurt.

In the field of career, the Chariot Thoth Tarot card shows us that we have taken a decisive step forward, as a bold step toward self-control. It is also a warning against the overestimation of one’s self and recklessness, as well as continuing challenges in all work activities and new beginnings to explore the field in which those goals are in harmony with our goals in life, and finally, with our High self.

In personal relationships, the Chariot Thoth Tarot can point out the beginning of a new relationship, sometimes, it brings separation from familiar things around. However, it could also mean that there is a “fresh wind” blowing through a mature relationship, which blows away signs of fatigue, as well as overturning daily routines and things that are considered obvious.

However, on the emotional level, this card has a deeper meaning. It is a matter of creating a kind of shaft that allows both sides to enter into a real relationship and at the same time, to achieve harmony with their High Self. Moreover, this card warns of impatience and challenges us to clear our goals.

The Awareness Osho Zen will help you get rid of the dream, and the new awareness will unlock the level of curtain out of your eyes.