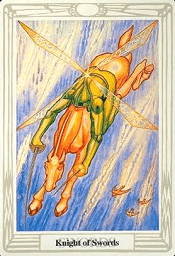 I. Analyze and describe the Knight of Swords Thoth Tarot

This Knight is a person who discovers the limit of reason randomly (Crowley), who represents the dynamics, creativity, and objectivity of Air elements when entering space. With a sword in this hand and a dagger in the other hand, he moves through paradise with the speed of the wild wind, the movement speed is too fast, making him one with the spirit of the storm and represents “the spreading fire of mind” (Crowley). It corresponds to the perception of the universe that all things are interconnected, and in that universe, all tangible things that existed in one blink and then quickly disappeared.

We see this contradiction illustrated by the wing on his helmet (the symbol of noble thought), it is the object that carries the hero and his horse (animalistic energy) through the “ocean of consecration”. Three swallows are symbols for the capacity of the mind to rising up in space (perception); but because they just fly over the water (emotions), they are a sign that natural instincts are things that determine the direction.

This card represents the ability to levitate, reaching the top of the high mountain and the most distinctive way of intellectual awareness and living in seclusion in that elevated world. His contradiction lies in the denial of emotion. So, the Knight of the Mind can be both clever and fake at the same time. In myth, he is portrayed on many aspects of Hermes/Mercury: like Loge (Loki), the Teutonic God of lies and protector for thieves, Edda writes about this as follows: ” As the first father of a two-faced person, he knows everything in every situation. He often causes serious wrongs for Aesirs and then, frees him with wise advice”. He is also a traitor like Hermes (Mercury), who leads the soul and the person who transmits the message of God, who often appears in paintings of alchemy as tears from heaven, or the rain/ grace/ fire of the Holy Spirit.

II. Interpretation of the Knight of Swords Thoth Tarot

We encounter the Fire aspect of the Air in this card as a blend of reasonably-minded people who are more capable than anyone (philosopher, mathematician, author) and often have an unpredictable change of mind, their sharp mind realizes that there is no truth but only the ingenuity that bends the truth sometimes wins the game of words until there is only a remnant piece of the original awareness (journalist, lawyer, orator, critic, and diplomat). In this sense, he relates to the mythical character, Odysseus, who is willing to break every principle when necessary to achieve his goal.

2. Overview of the Knight of Swords Thoth Tarot

Odysseus is a symbol of intellectual power, acumen, and intelligence, representing the ability to create, clarity, versatility, utterly contradictory ways, cunning, slyness, and sarcasm. When this card appears, it is the time for us to use and develop this contradictory ability of mental strength. It helps us understand, understand, and achieve insight. However, if these powers are used improperly, it will lead to emotional coldness, heartlessness, apathy, and all the bad consequences of rational abuse.

In ancient times, Hermes/Mercury was not only portrayed as the God of thieves, merchants but also a mediator between Gods and humans. His ability is a quick thought, the perception of the rope that correlates with the speed of light. He is comfortable with contradictions as he predicts, in every case, each reality is only the result of the concepts of human intellect. No one knows better than him that contradictions only appear in our minds in which he is the one who builds the steps leading to wisdom, helping us find the formula hidden behind everything. During this period, we develop great analytical abilities, which help us learn to understand the problem, understand ourselves and understand our surroundings better.

Occupationally, this card represents intellectual acumen, intelligence, social ability, and entrepreneurship. It shows that we solve the tasks that set out with skill, flexibility, and cleverness. In dealing with colleagues, superiors, business partners, and customers, this is reflected in eloquence, intelligence, and graceful wit. However, it can be a warning about exaggeration, heartless wisdom, insidiousness, and unethical wisdom.

In a personal relationship, we have a need to find an interesting partner that must be attracted to us in terms of appearance rather than about the soul. At the same time, we feel especially comfortable around Raggiana bird-of-paradise, are people with strong personalities – like this bird – who will feel wasted and eventually die in captivity. The stage of life represented by this card will tend to become full of excitement. Deep feelings, dedication, and harmony of souls will have to step back, probably because of the deep fear of each of us about falling in love and losing ourselves. Here, we find ourselves dependent or falling into a mess that cannot be solved. The clarity in perception now benefits, even if it is painful. But in the case of our feeling becoming the goal of scrutiny, sophistication will take the place of warm sincerity.

IV. Knight of Swords Thoth card in the upright and reverse

Qualities include clear insight on a problem, working quickly with your goals and not letting anyone or anything hinder.

However, there is a restless time when you are locating and trying to go somewhere else in your daily life or travel.

It is time to listen to your mind rather than your heart. Some people are more comfortable with thoughts in their heads than expressing feelings.

In addition, it is time when you need to be sensitive and assertive. In a career situation, there is much competition in the job. You may want to get rid of these restrictions and look for something to help you feel freer. The Knight show restlessness in every aspect of life.

In a relationship, he can represent love-hate relationships, in which you constantly break up and come back together. You love each other deeply, however, you bring out the warrior in each other, which can be draining in the long run.

Card 1: Central Theme of the Spread – The need to blow away the cobwebs from our heads to see the right path to the heart of things and not be distracted by the mess of life. We can get to the point to avoid any compelling but wasteful action.

Card 2: Crossing Influences – Our past actions have been wasted and we are not stuck to our intended plans; indecisive action.

Card 3: Subconscious Influences – Perhaps, our actions in the past have hurt people that we do not want to admit this.

Card 4: Recent Past Affecting the Situation – lots of energy, a movement trying to achieve things and having to battle to achieve your goals.

Card 5: Hopes and Goals – to be able to rise above the confusing clouds like the dark night and have the confidence to reach your goal; a lack of confidence in achieving them or someone blocking you, who is very domineering

Card 6: Immediate Future – work quickly through situations in hand, a time when you need to be mentally sharp and assertive

Card 7: How you are affecting your situation – able to use your mind to good use, often restless to move on to something new to challenge us mentally.

Card 8: How others are affecting your situation – The worst evil/petty/controlling person who can complement you with an analytical mind and lateral thinking at best.

Card 9: Guidance or Warning –  make sure your goal is ethical because you will tend to to be wasteful in your actions, or even cruel/violent in harsh circumstances.

Card 10: Overall outcome – You are moving toward your goal and will make progress in the situation you are asking about. If someone has been unfair to you, you will be able to overcome these obstacles, rise above them (like the Knight) and get what you want. Let’s take action and tell the truth but make sure your actions are moral.