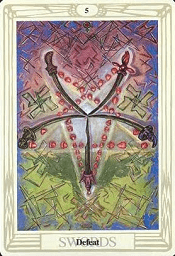 Defeat – The spirit of humiliation

I. Analyze and describe 5 of Swords Thoth Tarot

On the card, we see five swords forming an upside-down pentagram, the evil symbol of bad spirits. The rose in the previous card (4 of Swords Thoth) was completely destroyed, and its forty-nine petals now form a connection between the tops of the star (the hilt of the five swords). This reversed pentagram is the embodiment of dangerous conflict, fierce debate, curse, aggression, destructive thinking or difficult explanations that the mind does not want to learn and that directly touches the most primitive fears of human: fear of loss, fear of abandonment, fear of helplessness and extra belonging to the pity of others or deadly threats.

Reality and illusions have penetrated and mingled with each other and the belief in real things is gradually destroyed. However, the inner light of the star predicted that the ability to accept the battle of reason transformed the worst tragedies into an effective learning process.

Failure leads to a deeper level of awareness. We are not suffering because it is our desire, but suffering and failure are the necessary experiences to grow with the process of overcoming suffering. The desire for knowledge is also the desire to be protected. Crowley sees this card as a consequence of his weak attitude when the loss is the cost of avoiding excessive contradictions. He wrote: “Wisdom has been weakened by sentiment. Losing is the result of concessions. Betrayal can also be mentioned”.

This card contains failure, which is the key for us to approach our destiny. It represents the collapse of the old world when we are looking for intrinsic knowledge. Failure is a prerequisite to the greater truth. It promises a reward when you accept defeat.

This card indicates we realize that we are in an extremely difficult stage in which we are victims of humiliation, malice, or the brutal insults. This is the time when we are often told to “wear warmly” because we have to go through a cold valley of animosity and hatred.

There is a relationship that shows that the relationship is either sublimated or will soon be submerged. It illustrates a situation dominated and controlled by hostility, coldness, hatred, and the desire for power; people will confront each other with an aggressive attitude and often cause deep wounds for each other. We will often be our own victims because of the avoidance of contradiction, which will now require us to pay dearly to give up immediately all aggressiveness that unconsciously accumulates.

The hilts of the 5 swords are different:

Lowest sword = the hilt becomes a crown symbolizing spirit at its lowest point and defeated by matter, and the blade is broken to represent this. We may feel our spirit is broken over a circumstance.

The hilts of the 4 remaining swords imply that we are stuck in a bad place at the moment and our life is not moving forward as it should.

Green Serpent = lack of renewal and transformation within us; stuck in a boring lifestyle.

Fish = the past and a preoccupation with it.

Red Handkerchief = red with blood flowing from it shows that negative thoughts reopen old wounds and this creates fear.

Rams Horn = implies that there is no creative impulse in us at this time. We are not moving forward but stuck in this situation.

Shredded Rose = from the previous card and now forms the outline of the inverted pentagram.

Inverted Pentagram = matter dominating the spirit. A situation has the better of us at the moment, so we are not expressing our greatness.

Distorted Background = twisted lines limit our vision and true empowerment. A fear that history will repeat may prevent us from enjoying the present.

Blue Border = clarity pushed aside as this stressful situation dominates us at present.

White Centre = our spirit is turned down but is trying to make it visible to overcome this situation and shine in our lives again.

V. 5 of Swords Thoth card in the upright and reverse

The basic element of this card is the fear of distorting our views on the present and the unknowns of our future and this is repeated in the symbol system of the card.

It may involve a betrayal or stealth attack by someone you trust and do not suspect he/she is your enemy. There may be an unfaithful partner or a jealous person in your life that is sabotaging you behind your back.

Our fears can be the result of emotional loss of control from previous injuries from relationships or it can be linked to our work and bad experiences, preventing us from expressing ourselves fully when our confidence is lost.

If we can get rid of this fear, the energy bound in the pentagram will be liberated, and we can express ourselves in the way we want without fear and negativity that dominate our actions.

The mental disorder of this card we are going through but this may be related to emotional issues. Venus = sensitivity, and joy. We can feel that our sensitivity has had a hard time in the past, so we are in a situation of self-defeating that does not help us.

The power of this card can come to us in many ways. For example, we may have bad dreams that recreate difficult situations from the past. These are unresolved things, so energy is still locked in the pentagram.