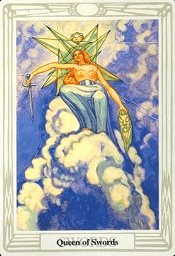 The mother of the light and holy intellectual spirit

I. Analyze and describe the Queen of Swords Thoth Tarot

This card is a symbol of extremely pure and clear thoughts and the Water aspect of the Air. “The elasticity of this element, and the power of transformation” (Crowley). We encounter a fierce look of a woman sitting on the top of the mountain with cloudy surroundings, full round chest covered with transparent silk strips, her chest is covered with transparent silk strips, from the waist down, she is wearing a simple and elegant dress. In one hand, she held a silver sword, the other hand, she held the big and bearded-head of a man. It can be considered as an act of reclaiming freedom when she frees herself from protection and support, however, on the other hand, she is described by Erich Neumann as the one who ruined the masculinity on the body of the man, meaning she had to silence him (the lower body, if it were cut off, meaning she refused him).

Behind her head, there was a quartz object, icons for the flow of idea that are gradually forming clear; what Crowley said “heavenly tears from there flowed a sharp beam of light”; Sufis called it “the light of pure wisdom”, and physicist David Bohn called it “the potential of all things or basic activity upon which everything exists”. Above her head (decorated as a helmet), we see the head of a child, representing the revival and power of creative life: in which we see the soul of the Father is freed, in the form of inner intellect, through the innocence of the child.

Every Queen is a symbol of maturity, is a very impressive woman or the feminine aspect hidden inside a man. This card, however, is not a direct expression of a mother’s image (not a model that touches our feelings about a mother). Instead, she tends to see things with the eyes of a man, this is a masculine aspect and lack of tenderness – awareness of eternal femininity. These qualities – the emotional arrangement of the masculine part of the woman – can be found in Hera, the guardian of the order (marriage) and the ancient Goddess Argos, Zeus’s wife and sister. As a representative of critique arguments, she possesses a rational mind but is filled with conflicting emotions because of her femininity that (Water) is not in harmony with the instinctive masculine part represented by the original Air elements existing everywhere.

Another Goddess with a strong intuition about the human direction and representing independence is Athena, born from the head of Zeus. He and the ancient Goddess of wisdom, Mestis, gave birth to Athena. Because he feared his son would become stronger, he swallowed Metis. Nine months later, Athena was wearing armor born from his head. She was the one who invented the alphabet and many achievements of humanity, and she is the Goddess of war and peace.

II. Interpretation of the Queen of Swords Thoth Tarot

The Queen of eloquent minds, with an arrogant cold look and sharp intelligence, is a proud and impressive image. But because of her high standards, she was always isolated and denied all emotions. She is very responsive, has a critical spirit, ability in direction, logical reasoning, and has a synthetic method in terms of positive aspects. On the negative side, she represents wrong reasoning, rude arrogance, and stubbornness.

Contrary to the understanding of this card in old Tarot decks, in which this Queen is only seen as an evil woman, and especially a widow, the new card shows us a woman who has liberated her mind from protection. She will, therefore, represent women like reporters, managers, entrepreneurs, lawyers – women, in a very skillful way, who have built their names in areas that we often called for men, and naturally, representing independent single women.

2. Overview of the Queen of Swords Thoth Tarot

On the inner level, this card is a symbol of the tendency to solve all our internal problems represented by the femininity of the Air element and intelligence, vigilance, independence, resourcefulness and quick perception. She is an expression of the ability to solve problems with the help of reason and the attainment of awareness without energy consumption, with an abundance of ideas and the capability to capture them. At the same time, our resourcefulness makes us deal with far-reaching problems.

In this area, the card shows the power of clear awareness through which we become aware of our attachment and dependence to separate and free ourselves from them. Little by little, with profound cognitive power, we succeed in finding ways to approach difficult-to-explore emotional areas where emotions and thoughts no longer exclude or interfere with each other. Then, this card may refer to an important process of the awakening and self-awareness.

In terms of career, this card means that we have great goodwill to learn, feel everything around us with open eyes, react with intelligence and skills, and self-control in a frank, clear, and courteous way of negotiating. However, it also implies a perfection through which emotional concerns are at risk of being forgotten.

In the field of cooperation, the intellectual distance of this card shows a relationship that participants want to be “adults”. This means that each partner tries to keep the relationship less jealous, as well as the development of autonomy and power as little as possible. In some cases, this effort may be successful. However, often this is just a “diluted” love of a relationship that has a rather bland material or pragmatic benefit. If this card describes a partner as a “steel woman”, the relationship will become a war.

III. Similar correlations of the Queen of Swords Thoth Tarot

IV. Queen of Swords Thoth card in the upright and reverse

You must use your unbiased intelligence to make decisions about a specific situation, based on the facts that accompany your experience. Empathy or compassion for others can make you lose focus on choosing the right one, so it is important that you think with your mind and not with your heart at this particular time. Do not let your emotions get in the way, but use reality and logic to make your decisions.

Someone with these skills would be good at counseling.

It is not really a time to equivocate in this situation, a reasonable decision is needed so you need to communicate clearly and accurately at this time.

Cutting through old patterns that hold you back and look at everything as if through fresh eyes like a child in a card. So, this is a time to dispense with the “mask of life” and have the courage in your beliefs to move forward in a fresh way.

Someone who has spent time cutting through their own “masks” and now feels liberated.

A sad and lonely person.

You are too stubborn and independent.

Being watch out for criticism, coldness, judgment, and cynicism.

Letting the old emotions and uneasiness enter a clear judgment.

Card 1: Central Theme of the Spread – the need to consider the situation in your hand and make a decision based on your head, not your heart.

Card 2: Crossing Influences – your independence, clinging to past hurts, being dominated by your heart excessively, do not share your insights so that your life is stagnant, sad emotion.

Card 3: Subconscious Influences – feel isolated/lonely and do not acknowledge it or vice versa, feel that you need independence from someone or something.

Card 4: Recent Past Affecting the Situation – the decision made based on your mind, not your heart; an isolated past, feeling cut off, alone; a sad time that you have or need to leave behind.

Card 5: Hopes and Goals – think clearly and be able to make decisions in your best interest not to be dominated by your heart, need to find your own independence.

Card 7: How you are affecting your situation – independent, goal-oriented, worked through difficult times and now liberated to move forward with our lives; use intuition with clear thinking.

Card 8: How others are affecting your situation – one in which we need to use our minds and have clear thoughts.

Card 9: Guidance or Warning – You should avoid criticizing and judging others otherwise you will be isolated. You need to reevaluate the importance of independence.

Card 10: Overall outcome – The clear sky ahead, see the world freshly and can use your difficult experiences from the past to bring your life forward and benefit others (counseling, formally or informally).