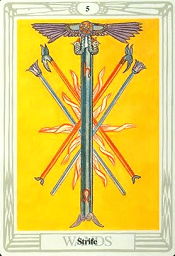 I. Analyze and describe 5 of Wands Thoth Tarot

The card shows the four crossed sticks and a fifth stick standing in the middle. Both of sticks above have the Phoenix heads which symbolize purification through fire and regeneration from ash. The two sticks underneath the lotus flower are the symbol of the Great Mother’s creative energy to create all things that exist to bloom and develop. In the middle of the card, the largest stick bears the cobra of Uraeus – the symbol of the king’s sun-like form in ancient Egypt (Crowley mentioned the scepter of Chief Adept).

On the Magus and Devil card, Uraeus’s scepter represents the highest growth (Atu I) and its Yin roots (Atu XV). Here, the stick is shown in the form of an Egyptian scepter, the symbol of the solar energy that the lower body emits with the shape of a fork originating from the shepherd’s stick and used to catch snakes.

This card is the equivalent of revolutionary innovation – the result of the transition from the “Complete” card above – and is the disintegration of a system that has stabilized in the balance. In the Tree of Life, Geburah (5) can be compared with movement that destroys the polity’s shape. It is the energy that evolves, breaking the limits of 4 of Wands Thoth.

We feel the aggressive fire energy surrounding the outside. It destroys the silent result (4 of Wands) and pushes us into a confrontation. From the perspective of developmental psychology, this card represents a person’s awareness of sexual orientation and consciousness of one’s self (puberty stage), requires a new orientation in the circumstances and conditions of a person with the surrounding.

We are facing resistance. The old positions are shaken and must be handed over. The issue mentioned here will be the fight with the thoughts and opposing views to get a new attitude or action. At that time, the card demonstrates the basic trade rule that competition promotes business.

We see ourselves being entangled in many conflicts with our partners, requiring a lot of effort to reconcile. From here, colliding heat can be strongly freed and/or connect us with our partners more intensely. Either way, 5 of Wands Thoth card contains the ability to renew the situation.

IV. 5 of Wands Thoth card in the upright and reverse

This card often appears when someone is very unhappy with the situation at work. For example, there may be a personality clash with other people; or perhaps, the stresses of work are a burden, so you feel overwhelmed by the number of tasks that your job requires, and you feel you are submerged in responsibility.

In these situations, there is a tendency to make a hasty decision without solving the problem.

This card may also represent the inner conflict where we are considering the decisions we have made that can test our conscience. Do we do everything for the best reason or do we act according to our highest ethical standards?

There are conflicts in a relationship where one or both sides act in a way that reduces their self-esteem and can cause serious consequences.

This card can show competition in the workplace where you confront some people with similar qualities or experiences. You may not be used to competing with others because you have built your success on your own. There is resistance to frustration, anger, and prejudice.

It also encourages diversity and difference in perspective. You may be in a situation where you are dealing with people from different cultures and backgrounds and may be struggling to accept their way of life. You should know that each person has something unique to offer and you will really benefit by learning more about them.

Your mental health is impaired due to a long time feeling overwhelmed by your responsibility at work.

You are constantly comparing yourself to others and feeling inferior. This card is a reminder to love yourself more.

You tend to avoid conflict wherever possible. You may find that any tension or conflict makes you feel quite uncomfortable and you wish it would disappear. Let’s consider whether it is always best to avoid conflicts and stressful situations or you are only compromising with what is important to you.

You cannot work well with others and listen to their views.

Someone forces you to follow his/her opinion; You can also be bullied.

Card 1: Central Theme of the Spread – You feel overwhelmed due to too much responsibility at work.

Card 2: Crossing Influences – The quarrels about relationships never seem to be resolved.

Card 3: Subconscious Influences – Comparing yourself to others and feeling inferior. It refers to the need to love/accept yourself more.

Card 4: Recent Past Affecting the Situation – You cannot get along with your boss or colleagues at work. At the same time, you are unable to show your true value.

Card 5: Hopes and Goals – You feel empowered and be yourself again. You can keep your own and not be threatened by people who are trying to take you down.

Card 6: Immediate Future – If you encounter difficult situations, try to see it as a learning process and take a positive growth aspect from it, while maintaining your integrity.

Card 7: How you are affecting your situation – You are in chaos, fighting yourself, feeling overwhelmed by your thoughts.

Card 8: How others are affecting your situation – You are taking on too many things at once. Quarrels and disagreements are detrimental to everyone.

Card 9: Guidance or Warning – We need to learn from the conflict stages and try to prevent repeated mistakes.

Card 10: Overall outcome – Having a high perspective of yourself through difficult circumstances. You gain growth and balance from a difficult past.