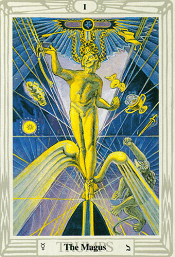 I. Background of The Magus Thoth Tarot card

When you look at this Magus Thoth Tarot Card, the center is a youthful relaxed character, who is a great dexterity (on the tip of the toe) on the mountain of the subconscious and juggling various symbols floating around. His two ankles are surrounded by a pair of giant wings (the symbol of Crystal), balancing the young man in an exaggerated and passionate posture. A human ape is climbing from the land below.

A network of golden rays filled the card and disappeared into the background. Only behind the new character is an opened triangular space, revealing an imagination beyond rational thinking. On the boy’s head was a picture of two snakes entwined like a turban, growing into a winged symbol (The Eye of Horus),  the highlight is a dove in the middle(the symbol of the Sacred Soul sacred).

The Fool Thoth, embodied the seed of appearing, it is still floating somewhere in the clouds, The Magus represents something that has formed, or psychologically, is an ego. That is why Crystal here is self-pleased as a small god, understanding the origin of creation, and stirring up the surrounding spheres with a radiant and mischievous face. According to the elegant gesture, he conjures images of his strange world, in which the energies coalesce into objects and the eternal manifests itself in time and space.

If the Fool is suspended in nothingness, the Magus Thoth Tarot deftly balances at the top of the subconscious, he is forming his own will. His posture was like a stork standing motionless on one leg and thus it became the symbol of the highest concentration and the symbolic animal of Thoth, the Egyptian God of Wisdom.

The Greeks called him Hermes and portrayed him with winged shoes, as we see here with the Magus image; They symbolize the first step of the ego to bring the soul which has been woven according to karma, from the deep bottom of eternity into the new cycle on earth with the end of hope for eternal atonement. The subconscious that he is standing on is the equivalent of the upper part. It can be seen through the blue-yellow stripes repeated above the head. We can see that the dual staff appears from the deep bottom, and it also shows that the Magus is a meaningful awake connection between deep pools and peaks.

On the top of the stick, we see Ur-uatschi, an Egyptian winged solar disk, possessing both Uracus snakes. The one on the right represents the goddess of exploiting Nekhebet of the higher Egypt; The one on the left is Buto twin, the lower protection goddess of Egypt. In the most common form, this symbol is often seen on the Devil card, which represents the darkest part of the creative power of “Magus Mercurius.” According to the legend, Egypt’s Horus Sun god took over the shape of the winged sun disk to win against Seth, God of Evil. So Thoth, the intellectual god, ordered that all temples need to display this sign as a way to protect against evil. The two serpents Uracus are the sun protection powers, also considered as a guardian amulet on many Pharoah’s foreheads.

The Uracus snakes protect the sun here, becoming a pair of snakes that make up the caduceus symbol (the sign of two snakes wrapped in medicine) (the scepter of Hermes): the snake(male) of the life and the snake (female) of death. The story of the exiled man only tells the wicked snake of death, whereas the medical students of Asclepius fight for the symbol of their field-the snake of lives. However, they merge together and form a vertical lemniscate line (infinity symbol) in the center, expressing the endless exchange between this world and the afterlife.

Background of the Magus Thoth ( existences)

The golden rays represent our network of thinking or duality. In concepts or bipolar thoughts, our ego tries to understand the infinity (green sphere). The geometric layout of these rays represents a structure through which the ego tries to define eternity.

It is located in the surrounding environment, this card is the embodiment and affirmation of the ego, and the beginning of the formation of consciousness. The ego goes through a hole in time and space (triangle space behind the character) and is starting to create an image of itself now.

While The Fool is in his madness to see through the obscurity of things, the Magus Thoth Tarot possessed a strong thicken the mist of eternity through his actions. This is shown in the card through the blue fan shape around the head (above the light purple triangle). They create reality through our actions, and the results of our actions will create the identity of each of us at the time.

Foreground of the Magus Thoth (symbols)

Intending to create Magus’s world based on his will allow him to penetrate the spheres represented on the symbols around him. Magic gestures in juggling spheres show that an inner belief cannot be broken.

They are Tarot colored symbols located on the witch’s desk in the ancient Tarot deck. They correspond to acts (plates), wills (chopsticks), emotions (glasses), and thinking (swords). On the other hand, they represent the witch’s four basic weapons equivalent to four elements (fire, water, gas, and earth). Time and space for Hermetic witch to integrate all triangular spectra in these symbols: the power of will and understanding, heart and body.

The arrow (above the right hand) represents the desire for awareness or energy towards the new horizon. For the Sharman, the arrow shot in the air with the meaning of pleading: it was a message and an invitation to God to attend the ceremony. In contrast, parchment contains knowledge that has formed, experienced and documented.

The level of existence and appearance (light purple wallpaper)

On the fingertips of his right hand, the naughty guy held a scepter of Uas, an ancient Egyptian symbol of belief and power. Meanwhile, a winged egg floated above his left hand, it is a symbol of the miraculous power of the clear sky, the fifth element, the quintessential quality.

The degree of darkness (partially obscured by the Mercury sphere).

The human ape, the symbolic animal of Thoth, Egyptian intellectual God, raising up from the shadow of consciousness against the sphere of light. It matches the personality instinct of Magus that angrily draws attention to his side so as not to be ignored because of the biased intellectual position.

III. The explanation of the Magus Thoth Tarot

The Magus Thoth is related to the alchemists Mercurius and to Hermes of Greece, the guide of the soul and master of every intersection, his dark feature is balanced by the Devil card:

Crystal always has the most impact on the thinnest, weakest, “unconscious” part of our consciousness system – on the threshold of stepping through this “other” reality, as if it could happen. And it establishes the association with the unconscious mind, which can free the conscious system from its one-sided burst, to relax and expand, but also to alert the risk of precarious disintegration. Also with those signs, wherever there are situations where the threshold and the systems reach its limits, the Hermes model – Mercurius is converged, because he planted that mistake, disoriented, insecure and afraid, and the laughs at the same time.

In times of social upheaval, for example, there are increased those deceivers: idiots, crazy people, clowns, comedians, stage artists singers and dancers. The entertainment and satirical writers wake up the growing concern and alternative lifestyles are found and tested, contradictions are obviously standing side by side, everything becomes possible. In conclusion, the world broke and went crazy. And above all, the deceiver is dancing on his rope and is extremely interested in all the chaos he has caused and it is a great motive for a new life. (Lutz Mueller).

The Magus Thoth Tarot means active, self-fulfilling, striving for empowering, and he has an extraordinary vitality. The strong resolution forms and changes objects expressed in this card. While The Fool is still blind and only feels that something has been discovered, The Magus Thoth Tarot makes the first decisive step. He knew what he wanted, and this allowed him to achieve every goal. On the dark side, there is a silly effort, through the power of positive thinking to mobilize the subconscious to serve the spirit, and nature has nothing better to do than just instantly please its gratification, which foolishly loves yourself.

The Magus Thoth Tarot gets what he wants because he knows how to focus his energies. The obvious intention brings more success because we basically act, not deal or stumble from experience to another. It is time for us to push for the clear curiosity and determination ahead, enter into unknown areas; hence, we access new territory into our region. This may imply new areas of interest as well as new areas of life. In any case, this experience leads us to expand our consciousness and deepen our sense of life.

On the professional side, the Magus Thoth Tarot card shows that we begin to start, become aware of our persuasive powers and use them intentionally. And it allows us to overcome tests, master challenges, and influence the course of events effectively. In the direction of this energy, we can succeed in the economy, gain promotion and complete professional projects. Successful action means using the outside intention to bring inner strength into areas that can develop significantly and advantageously.

In a personal relationship, this card implies a period with strong charm and intense attraction. Also, it is not a formidable desire to reach the goal, but rather it is easy, almost obvious, confidence in one’s own strength and ability, which can only be given in the harmony of consciousness and unconscious will. There is great power in the context: the Magus Thoth Tarot accepts himself and appeals to the love of people around him because of his honesty and openness.

The Existence Osho Zen Tarot is clearly a naked character sitting on lotus leaves, which shows the perfection of the leaves and stares at the sky with the beauty of the night. The lady in the card understands that “home” is barely a physical place in the outside universe.