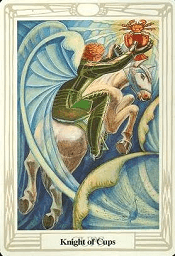 The kind and inner-enlightened father

I. Analyze and describe the Knight of Cups Thoth Tarot

This card embodies the vibrant side of the water when we seek to experience transcendence, renunciation, mysterious unity with the source, with the divine will, or with anything that cannot be described in words. This combination, at first glance, has a paradoxical effect because water represents the world of feminine emotions that is not always in harmony with the intense energy of the King; however, when the water rises to a higher level (the Knight is lifted up by powerful spiritual wings) and enters the eternal feminine part of the eternal masculinity (when he ventures his ego as if it were transformed into the water of the Upper Self), then the light of the Holy Grail in his hands radiates from the unity of water and fire.

From the Holy Grail, there is a crab (Cancer), a vital sign of water and a symbol of internal absorption that has moved forward and stepped into consciousness. As a marine creature, it has the meaning of female sexual desire like Pisces (expressing the ability to transmit life and receive life), however, its reverse movement and mysterious life nuances show the dark mystery inside. The holy cup is the transformative form of the vulva. The rooster in the lower-right corner of the card is seen by Crowley as a reference of the fluorescence phenomenon, signaling “Klingsor’s mysterious garden where Amfortas is infested by Kundry and winning his weapon from Klingsor hand “(Parcival). It is also related to sexual behavior to satisfy oneself rather than deepen feelings.

The Father of Cups expresses awareness and distillation of our inner nature. He also represents harsh struggles with spiritual spheres. As for myths, we can compare him with Parcival, the hero of the epic Arthur, who became the Holy Grail King after fulfilling his duties for many years of hardship. His most important challenge was to renounce love: he resisted the tempting intentions of women and from there, regained the spear (sexual desire) to heal the wound that Amfortas, the Holy Grail King, had when caught in Kundry’s trap of love. This is how the Parcival legend, in a multitude of others, escapes from emotional turmoil with the mother that can only pass by giving up.

At the same time, this is not only about dealing with sexual instincts, but also the compulsory dependence on sex in the form of greed to satisfy and replace the mother, which need to be overcome. Parcival, the King of the Holy Grail, the one who healed the wounds, was “pure Thor”, who won “knowledge with sympathy”: the spear in his hand touched and healed Amfortas’s wound because he now realized that was his wound too.

II. Interpretation of the Knight of Cups Thoth Tarot

He is a wise councilor and healer, giving great intuition to guide himself. We often see him as a doctor, therapist, or spiritual advisor in the role of “wound healer”, who either conceals his wounds and compensates by treating others or finds wisdom through pain and becomes a true healer.

2. Overview of the Knight of Cups Thoth Tarot

The card represents the desire to have more space for emotions and inner abilities. This is expressed in the form of music, writing, or other arts, and ultimately, the art of healing. However, there are cases where these powers are considered amateurs or thoughtless actions, a ridiculously awkward cartoon, crazy, unrealistic and extremely unreliable and often dishonest people. The card also warns us to become a toy of outside power because of the lack of capacity to set limits and let ourselves be dragged into chaos and underhand plots.

The Fire (King) and the cup represent the person whose task is to complete the most difficult combination, summing up the opposing elements of water and fire, and then finding the balance between the idealistic endeavors of will (fire) and inner instincts (water). The card also shows that we are especially directed towards inner life and experience, developing unconscious power. It also shows that we explore the image of the soul by dedicating ourselves to dreams, legends, the dreamy image of the collective unconscious.

In terms of life experience, we are in the midst of a desire to show more about our own soul power. We are increasingly working to express our emotions in our daily work by ignoring barriers and letting our ideas and dreams flow naturally into our actions. This also means that we approach tasks more happily. It also shows that we are choosing a new career or a new beginning, a desire to do things that can prove our mental abilities. This is mainly a career problem of art, therapy, and society.

The card shows the moment in which we may be more empathetic than normal in terms of desires and aspirations but are also afraid of our partner. Therefore, it expresses the relationship in which we express our emotions and open ourselves to new experiences. However, our great ideas are dangerous: we want to live in an ideal world that is more than what reality allows. This can lead to bitter disappointment, especially if we feel that we are misunderstood and not accepted by others when we are ready to give a hand.

III. Similar correlations of the Knight of Cups Thoth Tarot

IV. Knight of Cups Thoth card in the upright and reverse

He is independent, difficult to hold but at the same time humane

His sensitivity, dreamy nature, may not be reliable. There may be a spiritual aspect.

The period of lack of energy and inspiration. It seems lazy but this can also be a necessary rest period between creative times.

Card 1: Central Theme of the Spread – We have long-term conflicts that have not been resolved yet.

Card 2: Crossing Influences – do not feel valued, our voice is not being heard.

Card 3: Subconscious Influences – We know deeply that there is a person who is too shallow for us, has won a commitment to show but we do not want to face the truth.

Card 4: Recent Past Affecting the Situation – close to those who do not want to be in a commitment and are very attractive to us but a bit shallow.

Card 5: Hopes and Goals – to find someone we are attracted to and can be happy with, resolve our conflict, get a pure feeling back in our lives.

Card 6: Immediate Future – the period of inspiration mixed with the time of doubt and laziness.

Card 7: How you are affecting your situation – happy, unfulfilled feelings, self-doubtful, lazy but sometimes very inspiring; perhaps, more likely to see your negative points than others.

Card 8: How others are affecting your situation – happy, unfulfilled feelings, self-doubtful, lazy but also very inspiring.

Card 9: Guidance or Warning –  need to step back from the type of person you are attracting to your life.

Card 10: Overall outcome – an inspiring time ahead, just go with the flow, it will light up your life but it is not a permanent thing (draw more cards if necessary).