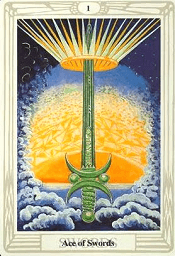 The source of awareness

I. Analyze and describe the Ace of Swords Thoth Tarot

The card shows us a sharp sword pointing straight up through the crown. It symbolizes the desire of reason to go straight ahead to find the ultimate truth that ignores pathetic thoughts. The sword is surrounded by a snake and is marked with two halves of the moon, indicating that this person’s mind is not simply abstract intelligence.

The magic word is engraved on the blade (Thelema) expressing will, so the paradise behind opened and radiated golden rays of light like fire. Because the sword represents human reason, the sun represents the sacred soul of all things, and the golden crown with twenty-two halo rays represents Kether, the ultimate principle in the charm of the Tree of Life. This image shows that the intellectual power built up by deep emotions (moonlight) can move forward to reach the highest level of awareness (crown).

II. Interpretation of the Ace of Swords Thoth Tarot

The card represents the basis of good thought or the source of thought. What we often describe in the philosophy of religion as “the Spirit of God,” or in Plato’s language is “the idea of the world”, embodying a shaping world or a world of the structure behind the material: “Yetzirah”. It denotes the development of humans starting from the Ace card with the formation of wisdom and ending with 10 of Swords – the card of destruction.

This card symbolizes the power of awareness, to judge the hidden parts of countless supreme things that cannot be explained, which we often perceive and judge by reasoning. Lacking this intellectual model, which allows us to cling to images, which can be said to detect and salvage a treasure from the ocean of unconscious things, each experience will then disappear because they will immediately sink to the eternal reality of difficult explanations. If we do not really understand and explain these confusing things, and there is no focus on the experiences we compare with each other, we will not be able to imagine the development of humanity.

This card means that a new and creative perspective will be formed, likely from conflicts. It corresponds to the principle of a higher right, leading to cognitive power to achieve insight, transparency, and assertiveness. It also represents the ability to acquire, analyze, and draw the necessary conclusions with all the subtle clarity without losing the ability to generalize the whole process. Anyway, this card shows the highest ability of reason in terms of enlightenment, transparency, insight, and freedom.

This card can embody the sharp reasoning and even the contradictory of how to solve and overcome problems that are inveterate. It divides everything, divides paradise, earth, men and women, spirit and matter, thereby, supports clairvoyance and helps us understand everything. However, in the process, sometimes it involves frustration (due to the hidden truth), which will lead to solutions in all aspects.

III. Similar correlations of the Ace of Swords Thoth Tarot

Crown = white on the outside (Kether), yellow on the inside (Tiphareth) = harmonious relationship between the two. They also represent the spirit of running through adept or enlightened people. The crown also symbolizes higher awareness and therefore, implies clarity and inspiration. A mind has gained new insight and inspiration.

Blade of Sword = made of steel (Mars).

The hilt of Sword = made of copper (Venus). It is in the sun of Tiphareth. Venus equates to love, and love must be the motive for our action and speech.

Sword = The clarity and focus of the sword that has withdrawn from the clouds and gives us clarity = inspiration.

Blade Inscription on Hilt =  Thelema Greek for the will.

In the Book of the Law, we have: The word of the Law is Thelema.

The green color of sword = green is a mixture of yellow (sun, fire) and blue (water).

Sun on Horizon = The lower sphere on the hilt of the sword is at the center point of the rising sun.

22 rays of the crown = 22 Major Arcana. It also links to Chokmah or the wisdom of the Logos.

V. Ace of Swords Thoth card in the upright and reverse

This card represents a deep and clear period. It represents a breakthrough moment and it is much easier to achieve goals.

You have a new perspective on life or a situation that was not previously clear so that you can now get straight to the point of the matter. This is also a good time to act, and if you focus on accomplishing your goals, you can achieve whatever you want.

It highlights a new idea, inspiration, initial thinking and creative vision. You are very excited to pursue new opportunities based on your creativity and spirit.

It also encourages us to fight for a cause of social concern and to find justice, after all, the swords in this card are the same with the Adjustment in Major Arcana (or Justice in the Rider-Waite). You can stand up for your rights or the rights of others.

For example, you may have a new idea that you are willing to fight, or you can be energetic about an issue that you are particularly passionate about, such as your human rights, environment or your personal beliefs.

You have gained new insight and inspiration. You have escaped from the clouds of confusion and doubt into clarity. There is now a blue sky, so we can think clearly in a new way.

We must realize that our achieved understanding (the sword through the clouds) by our will to progress and improve(Mars) is shared in a gentle and loving way (Venus) for the benefit of everyone.

We have lost clarity in a situation that has now become a problem for us.

Using our desires for a cause and defend ourselves too excessively.

There is no clarity and will to defend ourselves or implement our ideas.