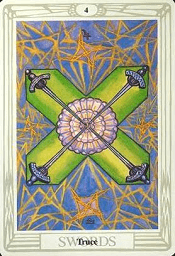 Armistice –The spirit of contemplation

I. Analyze and describe 4 of Swords Thoth Tarot

On the card, the tip of 4 swords pointed at the heart of the blooming rose, and the hilt of the 4 swords formed 4 peaks of St. Andrew’s cross-shaped flag, the symbol of pain and martyrdom. They, therefore, create a form of space dominated by magic, a protected space in which energy is regenerated. This is the card of the inevitable, so that the pain of 3 of Swords Thoth card dominates, then transcends it with self-awareness and understanding of the meaning of suffering. It is a time when we are freed from the pain of the wound that gradually heals, the strength has been concentrated, converged, and stored in the wisdom tunnel “cherished in thought” through the position of 4 swords (pointed tip supporting the branch of the rose). The explanation indicates that the outbreak of pain has finally healed itself. The essence of this card is the inner concentration combined with the willingness to experience pain to grow from there.

This stable card shows the quiet state in which nothing has been changed. Instead, the problem is only delayed and set aside. The truce is not really peaceful. The solution is only available when the pause is used subtly to gain new awareness, otherwise, the problem will only be temporarily put aside. In terms of the degree of transformation, the stability of this card also expresses the law of cause and effect of thought (“you reap what you sow”) that contains the entire law of the mechanical world.

The awareness of the supreme universe is now concentrated on the individual level. From a personal point of view, every entity appears in the form of an individual unit and exists independently beyond other entities. Therefore, we realize we are stuck in space and time frame that we build around reality, which is something that needs to be overcome because it is “born of itself” in terms of focusing on the inner.

This card reflects the need to retreat and protect yourself from the outside world. Because our self has not been aware that the true obstacle comes from the internal and external circumstances only contributes to its expansion, we hide and close ourselves from the world to avoid failure. Saint Andrew’s cross-shaped flag is set up by 4 swords that represent a clearer and deeper level of stability, which means that we must go through suffering before we can be liberated.

This card shows the moment of truce and peace manifested after the time of resistance. However, it would be hard to believe that all the past difficulties were completely overpowered. It can rise at any time and you will receive wise advice that you should take advantage of the current quiet time to build a new strategy.

We temporarily retreat to a remote and distant place to rearrange our emotional life, possibly with the help of therapies. If in the process we can purify the elimination of previous unintentional intervention, we will be able to give our partners a private space from which to feel more clearly the feeling of each person about their partner. This withdrawal phase can lead us to a peaceful attachment.

Number 4 represents a period of stability from the difficulties and chaos of 3. It is a temporary respite because there is still much work to do to get where we want to go.

Yellow spikey chaotic lines = Yellow color symbolizes air, chaotic thoughts and represents the conflicts that have been going on in our lives and now we have some respite from them.

4 swords (our aspect) are protected from the current chaos.

St Andrews Cross =  associated with the apostle St Andrew, who thinks he is not deserve being crucified in the same way as Jesus, so something about this statement is a lack of self-esteem in the question or at least, lacking confidence. The green color is associated with Libra. The cross of sacrifice was made to restore the sense of harmony but this was only temporary.

4 Swords =  The hilts of the swords bear the symbols of the 4 elements:

The points of the sword are wrapped in roses. This shows that we have some respite from the conflict in our lives. We need to recharge our spirits represented by roses.

Blue background behind chaos = Jupiter adds an expansion of consciousness when this truce is over. It does not mean life will be easy immediately but we have the potential to change to be better in the future.

V. 4 of Swords Thoth card in the upright and reverse

The need to spend time out of a stressful situation, maybe a needed holiday to recharge the battery.

Conflict will not disappear but waiting time is needed; the rest and recovery from stressful situations.

The need to take some time to rearrange your life to minimize stress.

Something unresolved, but hidden beneath waiting to be faced again when time rises from the bed of your mental rest and resolve decisions, fears, and challenge.

Taking advantage of this mental rest to become the most powerful when you need to face problems in hands, but do not overindulge in taking times of situations, problems, unavoidable circumstances of living life can grow into bigger or more challenging problems while your head is still under the covers.

Believe in your intuition to know when there is enough rest for you.

Refusing to take time out despite stress levels being high.

Having taken time out but it has not worked well enough for you to get the rest or distance from a situation you have needed to resolve.

There are too many compromises that have been made to achieve some sort of truce and this means that you are still contemplating everything continuously in your head.

There is too much time taken out and not knowing when to jump back in and move on with your life.

Loss of confidence and lack of self-esteem in this matter.