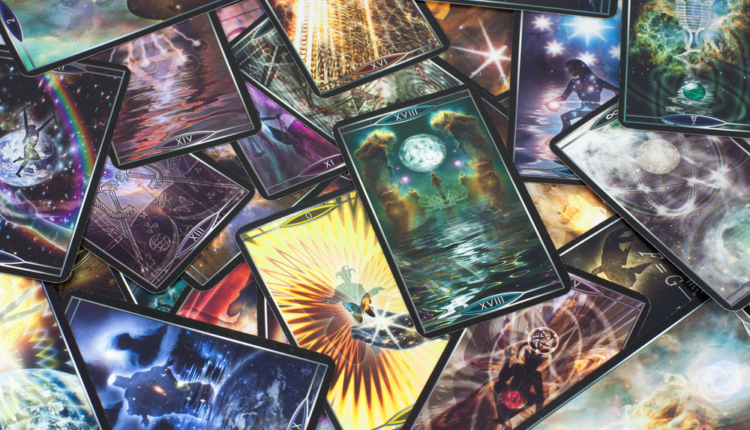 I always felt that when instructing new people, they focused on the first deck. Because it will be associated with this science of spiritual science for a very long time. This article has selected the following decks for newbies.

The full name is Rider-Waite-Smith Tarot, also known by names such as Rider tarot (Rider-Waite Tarot) which is one of the world’s most popular decks in the English-speaking community. Later, the deck was made into one of the “standard systems” that any new Tarot decks of cards would follow.

Because each standard has a different level of use, when new learners learn about Tarot asking for advice on selection, it is often recommended to use cards according to the Rider-Waite-Smith standard. Its usage is simpler and closer than other Tarot decks. Rider-Waite’s documents are more extensive, the number of users is also larger, more convenient to exchange experiences. Moreover, this deck is also used more in practical hands-on applications.

In addition, this deck has several versions with different sizes, different colors, different back (back images), etc, depending on your preferences. However, images and details are the same, so learning the cards is not much different.

A lively Tarot deck of cards. All details and colors are d by Morimura Ako and by artist Takashi Nozomi in CG (computer graphics) digital style. Right from the moment of taking the deck, users are almost fascinated by the magic that clearly evokes from the radiant and sparkling images. Alchemia Tarot’s image system follows the traditional Tarot Rider Waite Smith standard, so it is suitable for all levels, especially those who are passionate about Japanese-style comic-style painting. The accompanying manual is written in Japanese, however, because the image follows the Rider-Waite-Smith standard set, it is possible to use other popular Tarot study guides.

This deck is somewhat expensive, so new users of Tarot are quite worried. They are afraid that they may not be attached enough to it and that investment may not be effective. But if you intend to stick with Tarot for a long time, Alchemia Tarot must be one of the most worthy titles in the world!

With Llewellyn’s Classic Tarot, users will have access to the traditional Rider-Waite-Smith image and icon system in a more modern style by Eugene Smith. In addition, some of the details are also designed to be more optimistic when it comes to the connection with the standard meaning compared to the original Rider Waite Smith image. Barbara Moore’s accompanying guide – co-authoring hundreds of titles on Tarot – also offers users an effective way to explore the Tarot world easily. Whether a beginner learner or a long-time user of Tarot, Llewellyn’s Classic Tarot is still a worthy choice.

A clever combination of natural themes with the breath of Wicca and Druidry. The author – famous researcher Philip Carr-Gomm and his colleagues created a nature-themed Tarot deck with a high level of detail, and a visual system that clearly reflects the traditional Rider Waite Smith standard. The Druidcraft Tarot is an invitation for users to enjoy and appreciate the richness of Mother Earth, the natural world, the rhythm of the harvest. 78 cards are judged to have a very high depth of meaning, creating a perfect tool in supporting users to go further to enlighten themselves.

The Tarot cards are also based on lessons and stories originating from the ancient past, as if connecting users to “roots” – nature and land – on the path to finding knowledge. new, inspiring to solve everyday problems facing.

The Tarot deck is larger in size with the standard. For a newbie (sometimes used to playing cards with 52 cards) they will feel it is too big for their hands. The original shuffling became difficult. But gradually you will get used to it. Don’t worry about size.

Launched over 30 years ago, Morgan-Greer Tarot has always been one of the Tarot deck according to the standard Rider Waite Smith is the most beautiful. Considered the world’s first borderless deck, Morgan-Greer Tarot by Lloyd Morgan authors, Bill Greer gives a more spacious feel thanks to the image with a higher level of detail on the display area of the card is larger than the traditional image. Morgan-Greer’s image style uses many bold, vivid tones. The characters appear like the center of the card and occupy most of the position on the card, making sense and sense of the card quickly entering the subconscious, easily impressing the user.

Overcoming the weaknesses in basic Waite Smith Rider image and improving over other details, Morgan-Greer Tarot is a great choice for beginners. Even the experienced Tarot readers want to have traditionally-oriented cards, this can be an attractive option.

Thelema Tarot is one of the Tarot decks based on the Smith-Waite system with a modern digital image style, rich in esoteric, mystical and inspiring symbols. The deck is filled with a sense of the enchanting and captivating magic world. Let these sparkling cards become the guiding force for you on a journey to discover the intersection of the world light and darkness, between love and pain.

The Tarot deck name – Thelema – is Greek of “will”, both meaning of readiness, intent, and expression. It is also the name of a sect founded by Aleister Crowley (although the imaging system of this deck is not Thoth standard). An interesting wordplay. With an intimate image depth as well as a genuine inspiration, Thelema Tarot is a beautiful choice for both novice and experienced users.

With bold tones and style, it gives happiness for viewers. The Tarot cards help you to not confuse images of characters with playful, childish. They don’t seem to mind any problems in life. There is no such thing as the joy being prevented. Images of smiles are everywhere. The sun, cool ice cream sticks, sweet candies, and optimistic spirits flooded the cards. Happy Tarot is a deck of cards designed to transform your life in a more positive way. Whether used in any form, this deck always encourages users to look at the happiness aspect of life.

Happy Tarot follows the images from the original Rider Waite Smith deck so you don’t feel too surprised when using them as well as practice.

This is a Tarot deck of cards drawn with watercolor material. It has a simple design, soft brush strokes, and gentle brown tones. At the same time, it also used the Rider-Waite-Smith traditional image and symbol system. Fenestra Tarot of Thai artist Chariya becomes a bright choice for anyone who wants to follow the journey of a fool. Everyone can find themselves on that journey in a quieter and deeper manner.

The visual style of the Fenestra Tarot has highly appreciated thanks to the extremely vivid character design. Besides, the characters in the cards also have Asian forms. The mysterious oriental breath combined with Tarot’s charm will easily attract every object to learn and use.

The magical world of fishermen and dancing fairies in Shadowscapes Tarot helps it become one of the most beautiful Tarot titles in history. With the Rider-Waite Smith-based image system, Shadowscapes Tarot is a true work of art in the style of watercolor painting and the content blends many themes of Asian, Celtic and fantasy. Painter Stephanie Pui-Mun Law inspired by fairy tales, myths and folk legends from cultures around the world.

The detail in the image of this deck is very high. It gives a distinctly soft that is hardly comparable. The companion is another great work by Barbara Moore – the famous many Tarot books author. It highlights the meaning of the deck’s symbol system and provides users with a number of ways to spread their own design for Shadowscapes Tarot. This can be considered a suitable choice for many new subjects to learn Tarot. In addition, the deck also has a booklet version option, which includes shortened information from the companion book.

The famous Italian painter Ciro Marchetti once again brought the admiration to the user Tarot when portraying the success of the world of traditional Tarot Rider Waite Smith in a true digital art style that made his name known with Tarot of Dreams. Unlike other great productions such as The Gilded Tarot or Legacy of the Divine Tarot, Tarot of Dreams takes the theme of dreams, when it is clear when ambiguous, but the common point is extremely brilliant. Dreams portrayed throughout 78 cards, recreating the journey of self-discovery.

The image of the deck is the harmony between dreams and the unconscious state of contemplation, thus turning the deck into a powerful tool to support the exploration of your soul. In addition to the 78 cards in the system, the deck also has a Tree of Life card and four Palace cards to assist in deepening the traditional meaning of Court cards. The accompanying guide provides details of the ideas, information, and meaning of these cards. Tarot of Dreams is a deck of cards for all users

Witches Tarot is a deck based on the context of an era that has entered European history – the time when witches and magicians lived. Ellen Dugan’s author is an experienced reader and originally from a family of witches, while painter Mark Evans is a famous digital stylist – a combination that makes one Modern title is considered the most beautiful in the world. The companion’s companion book, in addition to providing the meaning of the cards, also has 4 cards designed specifically by Ellen Dugan for viewers and Tarot readers.

Images of painted cards have no edges and they are designed according to the traditional Rider-Waite-Smith standard. Some cards are renamed to suit the context like The Seeker instead of The Hermit, Pan instead of the Devil. Each Major Arcana card has a link to a tree of life. In addition to basic knowledge, users will gain a deeper understanding of the Tarot Witches if they possess knowledge of Qabbalah. However, overall, Witches Tarot is suitable for all users.

Golden Tarot has beautiful cards, it is a combination of images from the works of famous European artists. The images of Medieval on the cards are an honor to Tarot’s discoveries and development. In addition, it also praises the artistic heritage of humanity. The edges of the card are gold plated. The box is uniquely designed, sturdy. Images has abstraction and creative.

The author of the deck of cards – Australian painter Kat Black – cleverly combines the works of art with the traditional Rider-Waite logo and image system. In particular, he focused on both body and language gestures from the charismatic faces of the characters shown on 78 cards.

The Minor Arcana In Tarot