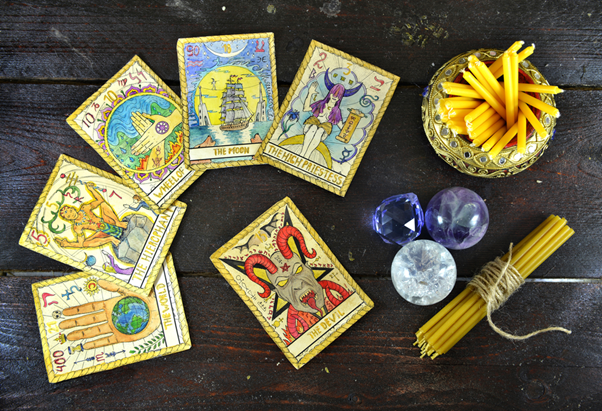 What are Tarot Cards? Things that beginners should know

The history of the Tarot deck

The origin of the Tarot was first noted around the middle of the 15th century. Tarot cards reading is art from the past and many people may already be familiar with what happens during a spreading. Actually, many decks have appeared centuries ago and these Tarot decks nowadays are derived from the Western cards that we usually play. The 78 cards of a Tarot deck are systematically arranged by the Italian artist Bonifacio Bembo, similar to those decks which we used in Tarot readings and spreadings. The term “Tarot” is a French word derived from the Italian word “Tarocchi”, meaning “Triumph” or “Trump card”.

A common myth of Tarot decks is that they are from Egypt, however, this legend was created by an 18th-century writer who said that these cards are actually translation cards with 4 elements known as Wands, Cups, Swords, and Pentacles. The first known deck, which was preserved, was created by an Italian family named Visconti-Sforza in 1450.

For a long time, Tarot cards reading was considered a gambling game, until the 18th century, a mystic named Antoine Court de Gebelin claimed that Tarot was the ruins of the Book of Thoth which an Egyptian god created to convey knowledge to his followers.

In 1910, the English occultist Arthur Edward Waite published his explanation of the Tarot deck with pictures designed by his friend who is the occultist Pamela Colman Smith. Waite thought that the Tarot deck was from the 14th century, but that the symbol on the deck has been around for a long time. He claimed that he had restored the symbols back to the original meaning. During the 19th century, Eliphas Lévi connected the cards to Qabalah, at that time people began to learn more about the Tarot, find more and more meaning, knowledge and depth research.

Nowadays, Tarot cards are widely used as a tool and a path to self-development through understanding oneself and understanding life. Each Tarot card will help you answer your questions and worries about problems in life as well as gives you a detailed and clear state of your past, present, future, directions, and intentions.

What are Tarot cards?

The Major Arcana (greater secrets), or trump cards, consists of 22 cards without suits: The Magician, The High Priestess, The Empress, The Emperor, The Hierophant, The Lovers, The Chariot, Strength, The Hermit, Wheel of Fortune, Justice, The Hanged Man, Death, Temperance, The Devil, The Tower, The Star, The Moon, The Sun, Judgement, The World, and The Fool. The Major Arcana is numbered in Roman numerals from I to XXI (many of them are numbered from 1 to 21 nowadays), respectively from The Magician card to The World card. The Fool Tarot card is the beginning card so it is not numbered, usually marked as 0 in most Tarot decks.

Being able to read Tarot cards as well as using them to predict the future means you have to know the meaning and remember all the details of each card.

What are Tarot cards used for?

We can use the Tarot as a tool to study the great philosophies of life, the mysteries of life, prophesy, discuss, analyze aspects of the problem, give the suggestion of future directions or simply use it to inspire creativity for our lives.

How do Tarot cards work?

The biggest difference of Tarot cards reading from other types of fortune is in the fact that its language is a symbol. The meaning of the cards is in the mind of the interpreters rather than in the cards themselves. By understanding and perceiving images on the cards, fortune tellers have a deeper and clearer view of them.

When it comes to Tarot, fortune-telling is out, and intuition is in, especially if you want to create your ideal future and manifest your goals. The most powerful way to read the Tarot is to use the cards to access your intuition and your inner wisdom.

Tarot cards open the door which allows us to get a glimpse into the future, but it does not show certainty. It draws the line but does not go for you. It signals events that may occur but does not guarantee that the event will happen. Tarot does not eliminate all of the wrong paths, but rather show you one or a few of the ways you have the ability to go. The fortune-teller does not view the future as an unchanging entity but a set of possibilities. Depending on where you are in the present, circumstances, strength, resources, some possibilities are more likely to happen than others. But whether they become real or not depends entirely on you. Regardless of whether the cards show a bright result, if you do not act but wait, nothing can happen. In spite of experiencing a future that is not what you want it to be, you need to know that you are the person on the road, not the deck, not the destiny.

Is the prophecy by Tarot cards accurate?

Proper use of fortune-telling can increase awareness of the meaning of many Tarot cards. Studying the symbols of a Tarot card is a part, seeing the connection between the cards is a greater part.

People still have a deep belief that everything is connected, by all meanings. The cards appear corresponding to the events that happen, similar to those diagrams of horoscopes corresponding to the life of a human. These things seem pointless because there is no “Cause-and-Effect” logic, but this thought is always followed by most believers, and the events that follow these prophecies are always accurate highly in a coincident way.

The true/false result of prophecy by Tarot cards or by any tool depends on the belief and knowledge of its users. If you believe it is true, then it is true. If you do not believe it, it will never be true to you.

How can we choose a suitable Tarot deck?

Currently, the number of Tarot deck in the world is more than 1000 different decks, and this number is increasing every year. All Tarot decks will follow one of three ideas from the three most famous decks: Tarot de Marseille, Rider Waite Smith Tarot and Thoth Tarot. Among them, the Marseille lineage is the most classic, since it is the root and foundation of the Tarot, and both Waite and Thoth are evolved from Marseille. Development stage includes two main issues: catching up the contemporary trend and breaking the traditional sense.

The Tarot deck by Rider Waite Smith makes up 90% of the current Tarot decks in the market because the graphics and the icons in the deck are simple and easy to understand.

The Marseille Tarot deck has a quite simple image system of The Minor Arcana which just includes symbols, and its use requires many algorithms rather than simply looking at images and symbols.

While The Thoth Tarot standards are complex and biased, they are more of an academic rather than analytical consideration of common problems.

Due to the specialization, interests, needs of each individual, the themes of the Tarot is extremely diverse. Almost every aspect of life is transformed into a theme throughout the deck, for examples: Shadow, Gothic, Elves, Animals, Plants, Flowers, Kids, Sex, Architecture, Fashion, Manga, Movies, Idols, Religion, etc.

Choosing a Tarot deck based on the topic that interests you or your favorite, your specialty, your knowledge, will help you learn more about it and make it easier for you to learn, memorize, practice and apply.

Although there are many Tarot decks, not all of them fully follow the original Rider Waite Smith Tarot images, sometimes they are just based on the card’s meaning. This will make it difficult for beginners who do not have the ability to sense images, symbols, and knowledge about it. However, if you diligently read the book that comes with every deck of cards, you can still grasp the intent of the author by displaying every card in the deck. It requires a lot of patience and time for newbies.

If you want to protect your deck from the effects of water, humidity, impact, you should buy a sturdy wooden box for protection. In addition, there should be a cardboard bag with soft, thick fabric to protect the card smoothly.

When spreading, there should be a cover to limit the exposure of the card with hard surfaces and remember to select the stone to do the baptism.

What is the Baptism of Tarot Cards and why we need to do it?

While practicing cartomancy using Tarot cards, the deck receives your energy as well as the energy of the person who needs the fortune telling and save the imprint of that energy. If the story is sad, heavy or about death, this energy needs to be cleaned, otherwise, it will interfere and affect the accuracy of the card. To get the best result, keep the deck in a relatively clean state by replacing the deck before and after the fortune-telling and then putting it in a box or wrapping it in a towel. This will help release the energy of the fortune telling.

Occasionally, you can clean the deck in a more thorough way. Traditionally, the least complicated way is arranging in order from the major set to the minor one, from low numbers to high numbers. After arranging, you shuffle it as if it were a new deck.

Another traditional way is to use stones to clean the deck (usually Quartz). The stone is placed above the card between practicings to absorb any disturbing energy. You can use a mixture of white quartz, violet, pink and other stones if possible. This ensures that your deck is always thoroughly cleaned and renewed. You periodically clean the stone by rinsing it with ocean water or warm salt water, then drying it in sunlight. Some of the crystals commonly used with Tarot cards:  Clear Quartz, Amethyst, Rose Quartz, Smoky Quartz, etc.

1.      Learning the Tarot: A Tarot Book for Beginners – Joan Bunning

11.  The Pictorial Key to the Tarot – Arthur Edward Waite

The Structure of 22 Major Arcana Cards