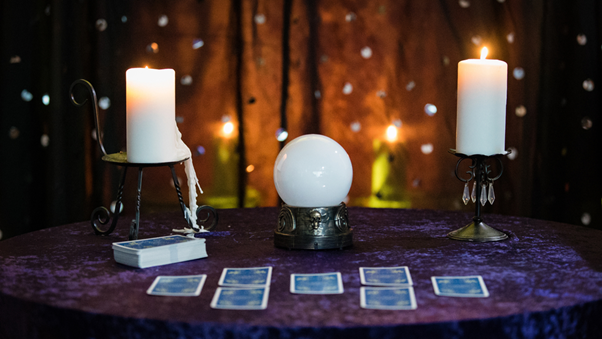 The overview of reversed Tarot cards

The reversed cards will partly support the range of meanings for each card. Besides, it can provide more sophisticated and accurate information because there will be more ideas about these alluding.

If you have chosen to read the reversed Tarot cards, firstly you should describe the card’s upright meanings, including the attitude, feeling, and situation of the character. Then you should apply your knowledge about the pros and cons of the cards and listen to unusual things, that is, things show different aspects or come from norms. For example, the character in the Nine of Pentacles (which usually shows the successful finance) is unhappy and worried, the main point of this reverse card. If the querent insists on the details of the bird’s head cap or gloves, he or she is probably anxious to escape the velvet prison in his/her comfortable garden. When the querent feels satisfied and peaceful in the card but does not link it to himself or herself, he or she can refuse to tell himself/herself about his/her property. (The rich concern more about money and safe than the poor).

That helps us think of the reversed Tarot cards as the “pennant”, reminding you to pay special attention to them as they will not function as usual. The upright meaning is usually cognitive, external, automatic, in progress, and available. But it is the point where you need to be especially careful, more energetic, or do something different. It is like a car will roll to the right or die, you can be nervous or make adjustments to it. Instead, the cards may be the point where you should stop your efforts or move forward, instead of resting or completely giving up expectations.

If there are reversed cards in a spread, you should consider whether it has a common theme, such as delaying or denying, then solving those cards in a positive way with that view. Those cards will show great support or leverage which can provide a head or obviously reinforce for action.

The explanation of reversed Tarot cards

There are many ways to perform reversed Tarot cards. The list below will give you some important techniques to see how a card adjusts the meaning of the forward direction. Although you will use a few ways, you can try at least one way to find out which method works well for you. Even if you just want to choose ways like your reading style and worldview.

Sometimes, the reversed Tarot cards bring a new photo or picture. For example, a person looking the parallel lines of the swords in the Nine of Swords card as staircases to the basement. The window in the Five of Pentacles card turns back to the main door. The swords in the Three and Ten of Swords cards look like they are falling from their hearts and backs.

You should not be afraid to try out possible explanations with the querent and ask them which is the most suitable. For example, some people think they feel the reverse king shows the accuracy character of their mother rather than their father.

To sum up, the reversed Tarot cards often show the existence features within the entire meaning range of a card. You should always consider the full possibility, find claims from other cards, get feedback from guests, and think of many possible options at the same time to profoundly read cards.

How to read Reversed Tarot Cards

There are many things to discuss this topic (reversed cards), but here are some main things you should consider: