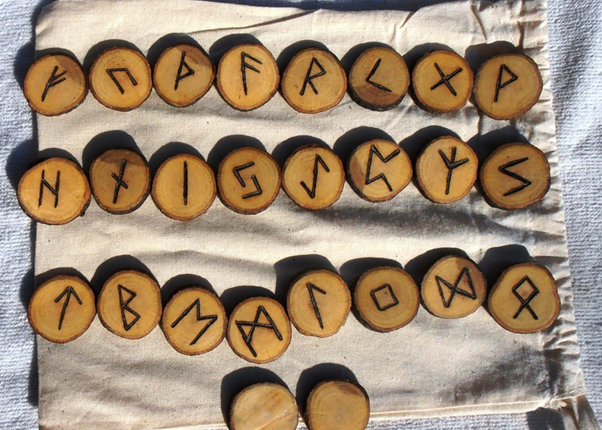 Elder Futhark Rune alphabet is the beginning for other extensions (with originality from the Greek alphabet, Ancient Italian alphabet (theoretically).

Reasons behind the name Futhark

All the main alphabets start with Futhark, taken from the first letters of the table (Fehu, Uruz, Thurisaz, Ansuz (Os with Anglo-Saxon table), Raidho, Kenaz (Cen with Anglo-Saxon).

There are photos of the Rune alphabet which have been mentioned above:

Unlike other Rune alphabets mentioned above, the author of this alphabet is an Austrian. His announcement about Runic alphabet is coded from Poetic Edda, a column of Havamal (Words of the Highest) about the song of 18 runic letters that Odin has left in his poems.

The purpose of using the Rune Alphabet

In Viking culture, as well as other ethnic groups, Rune alphabets are used for many purposes: seal, landmark, divination, charm, etc.

However, the uses of Rune have been classified to:

As a writing language

Rune Alphabet is used to write but there is no material nowadays that mention how to write Runes correctly and by which language, or whether Rune can be written in English, Latin or other languages and how to write them correctly.

Until now, the uses of Rune Alphabet as a writing language do not follow any rules given by any organizations but personal use. Depends on the individual purpose that there will come other methods of writing (mainly English).

If you want to hide anything from others, isn’t Runes the best language to use?

As a divination tool

Runes’ divination is completely different from Tarot. Tarot represents the upcoming future, formed by the complex combination between the past and the present, along with the mysteries of the faith.

However, in Runes, the future can not fully be predicted, to be more accurate, the Runes reflects the most possible outcomes (divination), as well as bring the belief of changing the future. There are many ways to explain this but the Norns will give the most satisfying answers.

The Norns are Giant Goddesses, hold the fate of the gods and humanity, Urd (What Once Was), Verdandi (What Is Coming to Being), Skuld (What Shall Be), sitting by the Well of Urd.

They are often mistaken that the Urd represents the Past, Verdandi – the Present, Skuld – The Future. But the meaning lies in the names of each Norn is the basic definition of the Circle of Time, about how every living being is developed rather than the moments of the time.

Also from these names comes the reminder of the Runes users to predict that fate is not the final destination and can not be changed. There will always be opportunities, spaces for movements before the fate itself can be decided.

Also not to mistaken that Runes is random in possibilities because they are chosen by the consciousness of every human beings.

Runes are often used for lucky charming, healing, conscious affecting, hidden messages or even to curse the subject (mentioned in the History of Egil).

The most common-used nowadays about applying the magic of Runes is Bindrune. They are the combination of many runes (carefully selected), used as a lucky charm for the owner, carved and positioned, have many preservation methods such as financial security, consciousness advancement, property protection, …

Warning notice when using Runes with a magical purpose:

How Odin find the Rune alphabet and commands to the users

The great God Odin hung himself in a ritual act of self-sacrifice. In the ancient poem “The Words of the High One”, which is in the third of Birdie’s books. Verses 138-145 tell how Odin obtained the runes, through self-sacrifice. Verses 146-166 tell of rune magic Odin learned and can use.

138. I trow I hung on that windy Tree
nine whole days and nights,
stabbed with a spear, offered to Odin,
myself to mine own self given,
high on that Tree of which none hath heard
from what roots it rises to heaven.

139. None refreshed me ever with food or drink,
I peered right down in the deep;
crying aloud I lifted the Runes
then back I fell from thence.

140. Nine mighty songs I learned from the great
son of Bale-thorn, Bestla’s sire;
I drank a measure of the wondrous Mead,
with the Soulstirrer’s drops I was showered.

142. Hidden Runes shalt thou seek and interpreted signs,
many symbols of might and power,
by the great Singer painted, by the high Powers fashioned,
graved by the Utterer of gods.

143. For gods graved Odin, for elves graved Daïn,
Dvalin the Dallier for dwarfs,
All-wise for Jötuns, and I, of myself,
graved some for the sons of men.

145. Better ask for too little than offer too much,
like the gift should be the boon;
better not to send than to overspend.
…….. Thus Odin graved ere the world began;
Then he rose from the deep, and came again.

In Norse Mythology, Odin craftily pursues knowledge throughout the worlds and bestowed among humanity the runic alphabet.

Odin is described as having hanged himself on the cosmological tree Yggdrasil, stabbed by the spears, looking upside down to the Well of Urd (Well of Wisdom) for 9 days and nights, Odin has left his eye in the Well of Urd as a price for some water from the well for seeking the wisdom beyond mere conventional knowledge of the world. This is the reason why he is known as One-eyed god.

There are books about Wyrd Rune – earned by Odin but Runes only are introduced in the 80s century by Ralph Bum. In Runes, the dot “.” Or colon “:” presents the space between letters, not space as in Wyrd Rune above (Runes simply are considered with the definition of a symbol) and there is no evidence that Runes are written and exist in the past.

The Journey of the Wands Tarot cards

How To Use Runes in Prophecy