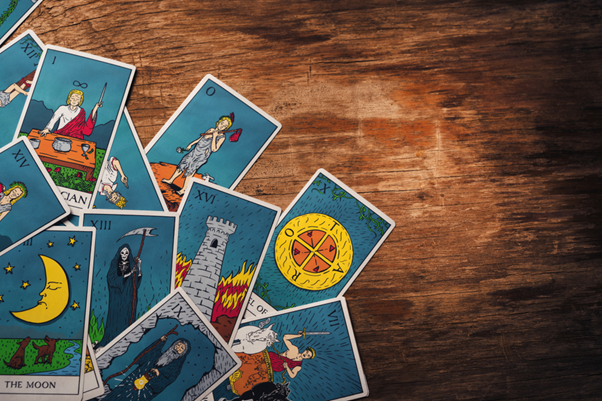 The Major Arcana in Tarot

A standard Tarot deck consists of 78 cards divided into two parts, the Major Arcana and the Minor Arcana. The Arcana word is plural of Arcanum which means “deep mystery”. For medieval alchemists, Arcanum is a mystery of nature. Therefore, Tarot cards are a collection of mysteries that underlie and explain our world.

The 22 cards in the Major set are the center of the deck. Each of these cards represents some common aspects of human experience. They represent prototypes – uniformly influential and direct samples which are inherent parts of human nature.

Each card in the Major Arcana has a unique name and number. Some names have direct meanings, such as Strength, Justice, or Temperance. Other cards personify an aspect of life, such as the Magician or the Hermit. There are also several cards named after astrology, such as the Star, the Sun, and the Moon. They represent “confusing” forces associated with these supernatural entities.

Cards in the Major Arcana are special because they open up complex and deep reactions. The images on Rider-Waite’s Tarot deck evoke associations because they combine the system of mystical symbols with recognizable images and circumstances.

In addition, a card in the Major set always adds an important part to a spread. When one of these cards appears, you will know that the problem is not literally or temporarily concerned. They represent the most basic problems – your mainstream feeling and motivation. In the following articles, there will be more detailed presentations on how you can identify and interpret the main themes of the Major set in a spread.

The Major Arcana is often viewed as a unit. Various diagrams have been developed to show how cards form prototypes that will clearly explain human conditions. Arithmetic, astrology and other mystical sciences frequently play an important role in these samples.

Many Tarot readers consider these cards as the way of expressing different states on an individual’s inner journey of cognitive development – often called “The Journey of the Fool”. Each card represents some qualities or experiences that we must have before recognizing the completion.

We all travel on the road to self-realization, though this journey is quite difficult and troubled. Each of our paths is unique, but there are common milestones. The 22 Major Arcana cards are the milestones on the path to developing inner awareness starting from the primitive perception (card (0)) to the unity and completion (card (21)).

The Fool’s journey seems peaceful through each order of experience, but our learning adventure often does not take turns like that. We make mistakes, miss out lessons and fail to recognize our potential. Sometimes, we lack the courage and deep thoughts to explore the deepest levels within ourselves. Some people will never feel the Hermit’s call to reflect on themselves and never experience Tower’s crisis that can free them from the conservative ego.

At times, we try to overcome our obstacles but fail. The Hanged Man teaches us to skip and stop the experience, which is particularly hard and may need to be faced continuously before being fully consolidated.

We usually go through unordered lessons. A person can absorb the qualities of Strength early in life because of his/her miserable childhood but takes a long time to develop the ability to master and control of the Chariot. Some people can overcome Devil’s temptation due to their reclusive lifestyles but then need to learn about relationships and sexual activities – a lesson of the Lovers.

Major Arcana contains many levels and samples of experience. These cards hold the whole model of development, whether they occur in a stage of life or the whole life. We can even say that a human being’s life is really just a chapter developed in a thick novel about the process of soul development.

Whatever the sample of our self-discovery is, these cards also tells us that completion is our destiny. If we keep this as our guideline, we will eventually realize our true nature and achieve the World.

See More: Top 50 Best Tarot Decks You Should Own

The Minor Arcana In Tarot