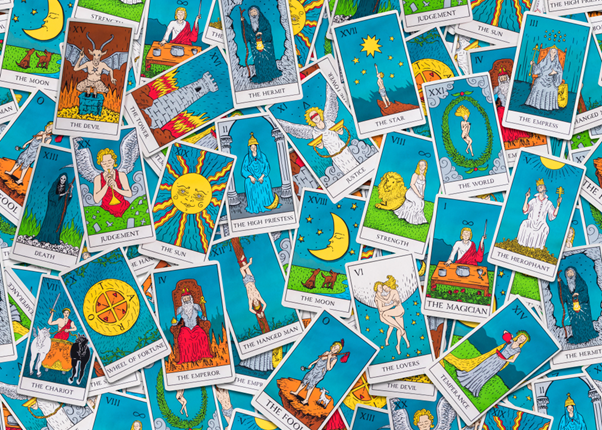 The Major Arcana made Tarot become Tarot, in other words, it formed Tarot. This is quite simple to understand, we can visualize that Tarot created by 4 suits and 22 cards of the Major set, as well as in a deeper meaning. No one knows exactly when humans start using cards to predict the future, but it can be assumed that this usage could be formed close to the time when cards appeared because almost all gambling equipment is used in divination.

To gamble is used in divination (and also for other things; no one gambles with the bird’s internal organs or holes in cheese, which are also used in divination). The reading, at the time, was not only practiced on Tarot. However, when we read the Tarot cards, the Major Arcana gives us the meaning beyond the answer to our question. In fact, this is true even if no Major card appears in the Tarot spread because the Minor cards are resonant with symbols from the Major cards.

The first deck with “triumphs” cards, or trumps, which is the original name of the Major Arcana, appeared around 1430 in Italy. As described in the introduction, people have been arguing for a long time about whether the first trumps created secret teachings and the meaning of those teachings. The truth is, it doesn’t really matter.

If these cards do not originate from the teachings of the Egyptians or Jewish traditions, as known as Kabbalah, they always carry spiritual messages. With images like a female Pope (the High Priestess in modern Tarot decks), the alchemist (the Hermit), with angels (Temperance, Lovers) and a demon (Devil), or death and revival (Judgment), they remind us to reflect on our own lives and the world around us, in a meaningful way.

Since 1781 with the first rituals originating in ancient Egypt, the structure of the Major Arcana has become increasingly clear, gradually creating a coherent story. Names and images have changed, and many symbols have been added, bringing a deep and delicate story.

Eden Gray called it “The Fool’s Journey” and that name has been used to date. The Fool expresses the soul, since being created, he has overcome the challenges of life until he died and even surpassed death to reach spiritual enlightenment. Therefore, in a spread, for any problem, cards will connect you with important teachings even if you do not recognize it. This is what makes Tarot special – what makes it become Tarot. Since the Major Arcana’s descriptions can be a bit complicated, we can start with keywords and end up with the upright and reversed meaning of cards.

We can divide the Major Arcana cards into groups to understand more about the Fool’s journey because the 21 chapters of the whole story seem prolix. For example, we can consider cards from (1) to (10) as the first half of the story, cards from (11) to (20) is another half, with the World card (numbered 21) at the peak. This division allows us to compare the two halves of the story:

There is a better and simpler way here – we can divide the Major Arcana into the Fool and three rows in which each row has seven cards.

The appearance of number 3 is found many times in the legend and religious teachings of the world. There are the Trinities in Christianity, the Father-the Son-and the Holy Spirit, Trimurti (Three Gods) in Hinduism, the Creator-the Guardian-The Destroyer, and the Virgin Goddesses (or maiden goddesses) Artemis, Hestia and Athena, associated with the phases of the moon and three Fate Goddesses that hold our lives. In modern philosophy, we find the idea of thesis-antithesis-synthesis. The examples above have come from one of the most basic things in our existence: every human being is a combination of the father and mother genome, so father-mother-child is a beginning trio.

Remember that in ten planets in astrology, seven planets are invisible to the human eye. In fact, this is why we have 7 days a week, each day being “controlled” by a source of energy from a planet. There are also 7 colors on the rainbow, 7 main chakras (energy center) in the human body, and 7 notes in music (do, re, mi, fa, so, la, si, and then start again with the note do).

In America, there is a tradition of considering an individual as an adult when reaching the age of 21, equal to the number in the Major Arcana (from (1) to (22)).

In the three stages of the Fool’s journey, we can describe the first stage as external difficulties of life including growing up, solving problems with parents and society, learning how to love and create a successful life. This stage reached a peak at the strong and confident Chariot card. The second part of the story takes the Fool through a great transformation, starting with the lightness of the Strength and the mysterious light of the Hermit, and ending with Death – the death of everything seems very important to the Fool – to us – to find the divine ego in card number 14, Temperance.

During the journey of the Major Arcana, the Fool has traveled far and even died to be resurrected, but we still have 7 more cards which are the new high level. At this time, the Fool really became a legendary hero, and although these last cards seem quite complicated, they actually tell a simple story that can be called the Enlightenment. The darkness in the Devil (15), then a lightning flash in the Tower (16), followed by light sources that gradually grew with the Star (17), Moon (18), and Sun (19), until finally reaching the glory of Judgment and perfection of the World.

What a wonderful story! Just like the 3 horizontal rows – from cards (1) to (7), cards (8) to (14), and cards (15) to (21) – we can take a look at 7 vertical rows; for example, Magician, Strength, and Devil or Chariot, Temperance, and the World. A reader named Caitlin Matthews calls these groups “triad”, and we can find them when looking at the Major Arcana cards. It can be said that these things have a certain meaning in a Tarot spread and explain how people use cards and are interested in them from the beginning.

More generally, the meaning of these cards is in their symbolic world. In the past, many people who had a deep understanding of Tarot’s wisdom considered the reading of tarot articles inappropriate or even offensive.

Thus, their meaning list could only repeat old formulas, without connecting with real images. This can cause cards to lose their importance and become difficult to use in a spread. We should let the self-developed meaning naturally surpass the image of the Major Arcana cards, the stories, and the mysterious things, the reading process will become smoother.

The Major Arcana in Tarot