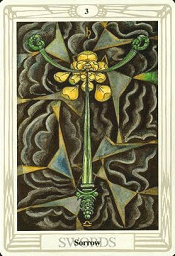 Sorrow – The spirit of sadness and depression

I. Analyze and describe 3 of Swords Thoth Tarot

This card represents obscurity because the storm has come and disrupted the balance; finally, the storm comes from within and forces us to grow up, beyond our own inherent framework, so it will cause pain as its nature. This card shows that liberation energy from our own development process is reasonable. The blue sword is the magic sword showed in the first card of this suit (Ace of Swords Thoth card). Along with two curved swords, it pierced and destroyed the yellow rose – the symbol of perfection – with a powerful stab. Rose petals fall, and in the background, the storm begins to rise.

This card symbolizes stereotypical actions arising from stereotypical thoughts (2 of Swords Thoth). We can only move by action, but actions can only be consciously realized in the visualization of the world we create. The desire for extreme knowledge and the craving for action has caused bad results and, in some cases, catastrophe.

This card shows that we find ourselves lost in cognitive development that is full of pain and frustration. We separate ourselves from trustworthy perspectives and established habits and must overcome our own laziness. The card also warns about the abuse of the power of the mind (masculine) to penetrate the flower (feminine) so that it can take the mystery of life. In the end, the flower was destroyed and the secret remained hidden, but the power of nature created a force against the intrusive penetration of mysteries.

This card means that we are harmed or hurt and have painful experiences caused by failures or endings. We can almost do nothing to solve this situation. All we can do is to understand the reason why we fell into this stuffy situation and to avoid having to encounter an unreasonable similar situation. The most common cause of this situation is that intellectual capacity is used in an overly calculated, cold-hearted, and biased way.

This card represents frustration, humiliation, insult, hurt and sometimes, the end of the relationship. But it may also have a positive meaning due to assertiveness, even if vulnerabilities can be encountered, we still separate ourselves from our negative relationships that cause suffering.

The main sword =  similar to the sword in the Ace of the suit, but is more damaged. So, Ace’s purity was quickly replaced by a damaged element in the three.

It holds the rose and represents the main traumatic event in the past that still negatively affects us now.

2 curved swords = they pick the rose apart and represent the fact that we are out of harmony with ourselves at the moment and they are sabotaging the present.

Broken Rose = Heartbreaking to the core.

Background = dark and chaotic; it turns off the light of the present and envelops us in a dark situation that we cannot see, they are chaotic storm clouds.

Sadness is like the dark night of the soul that many people experience before a real breakthrough into a more positive new beginning in life.

V. 3 of Swords Thoth card in the upright and reverse

Sadness about hurt in the past, loss or separation.

A sadness extends deeply, unresolved grief due to the loss of loved ones or parents.

The end a marriage or a long-term relationship.