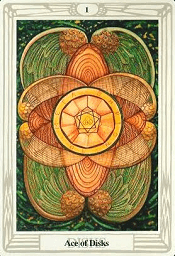 The origin of material

I. Analyze and describe the Ace of Disks Thoth Tarot

On the card, we see in the center of the moving spheres — a system of rotating wings and disks — a gold coin, inside which is engraved with secret signs. The innermost center of this system is formed by three rings that symbolize the law of life, only through the combination of opposites (1 + 2), can the new life (3) be created. Here, we see “1” as a symbol of unity with oneself, unity, the world of archetypes, world souls, the highest wisdom or the origin of all life (Ace). There are also mysterious and cryptic “666” numbers, which many called the mark of Satan and Crowley considered “the number of dazzling light.”

All three rings are surrounded by a seven-pointed star, and they are covered by two other seven-pointed stars stacked on top of each other, their peaks forming a wheel of ten spokes forming a cross shape. This refers to the holy mark of order A ∴ A ∴ (Astrum Argentum) founded by Crowley. The number 666 in the middle relates to the beast of Revelation, which is regarded as the AntiChrist beast that Crowley often equates himself with it throughout his life. Greek inscriptions “To Mega Therion” means “the Great Beast” and is one of many titles Crowley likes to use. According to Crowley, if the number 1 above is added to 666, the result will be the number of Scarlet Woman, the beast rider.

II. Interpretation of the Ace of Disks Thoth Tarot

The Disks suit represents the Earth element; this corresponds to the material world, the “Assiah” humanity of the Cabalists that appeared on the back of gold coins. Gold or money is not only a means to gain power and rule in the outside world but also a sexual desire or important energy is specified. From a one-dimensional material perspective, gold can cause love to die because behind the statement that the desire for gold and power is the root of all sin, there is a fact that any attempt to gain power is poison to love. However, on the level of spirituality, gold is the manifestation of what is desirable to achieve at the highest level.

This card shows that we are busy with the question of what the earth element means to us and how we will deal with realism issues, guarantees, stability, endurance, and capital. Perhaps, through this, we recognize the joyful nature of Mother Earth, who is burdened by all the negativity during the patriarchal period. At least, this is the correlation Crowley created with the card.

This card shows that we are struggling with values from our actions, through them and while doing them, great opportunities for progress and development take place as desired. It is entirely up to us to invest more in external or internal values in this process. The card contains both of these abilities.

This card shows the opportunity to have valuable and lasting experiences and relationships. This opportunity may appear at a new meeting, as well as being present by the depth of an existing relationship. In the context in which Crowley added the number 666 and 667 to the cards, the passionate aspect of a relationship can increase notably (Great Beast and Scarlet Woman).

III. Similar correlations of the Ace of Disks Thoth Tarot

Background =  Emerald green flecked yellow-green =  represents the Green Spring of the new Aeon of Horus and also the sun and earth as living beings combined. It is also 2 sets of wings sheltering the other 4 sets clearly visible.

6 wings = 4 horizontal (inner and outer) and 2 vertical = 6 number of the sun. They represent the spiritualization of the earth by Kether (foliage resembles angels wings).

Whirling Central Disk = not static like a coin (Pentacle) but a whirling disk which is the simulation according to the nature of the atom and the universe.

To Meta Ophion (To Mega Therion) = This was his seal on the Thoth Deck.

Ouroboros = a circular symbol depicting a snake, or less commonly a dragon, swallowing its tail, as an emblem of wholeness or infinity.

A 10 pointed figure formed from 2 heptagrams on red and one black. They form the hub of the wheel and from them emanate the 10 spokes of the decagram.

7 pointed star = of Babylon, or the whore of Babylon.

3 Yellow circles = phallus & testes one circle inscribed with the moon. Yellow the color of Tiphareth.

Uppermost Circle = connection with the sun if we consider a dot in the middle.

The Scarlet Woman = 667 = formed from 6+6+6+1 (1 is in the top circle). represents Crowley’s partner and also Universal female energy.

666 = sum of all the numbers in the magic square of the sun.

V. Ace of Disks Thoth card in the upright and reverse

A new job, business adventure or finding new financial resources. Not necessarily anything specific at this time, but there may be a potential opportunity for a positive new start in this area of your life.

A sudden input of funds or another view is to send positive messages about the abundance that will sustain you.

A new beginning in terms of starting a new hobby, but something that has practical elements to it. This is a time to work on tangible rather than abstract, such as learning a new skill.

Crowley is keen to point out that this card also talks about our relationship with nature. From this point mentioned in Book Thoth, this card refers to a greater understanding of ourselves through observing nature and seasons and becoming more in tune with it.

Not sticking with wealth or materialism but instead, using it for our internal and external development in a constructive way. For example, using work as a support for our spiritual studies rather than the end of itself or considering how it can serve others.

Being careful about income and spending.

Being blinded by greed and taking advantage of others for your own benefit.

Seeing work as an end in itself.

Losing contact with nature, lacking harmony with things around.