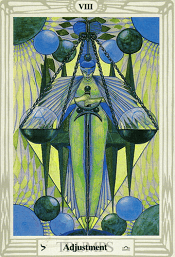 This is a picture of the most attractive and exaggerated harmony, opened from the center and gradually expanded into the surrounding space, complementing the image of the Fool and corresponding to the High Priestess. The Fool Thoth, who avoids the contradictions of reality and escapes himself into the deep subconscious world, is expressed as the opposite of card number VIII, Adjustment Thoth Tarot.

The Breakthrough Osho Zen is a great adventure in life to overcome an accidental breakup. It is the greatest risk as there is no guarantee that the breakup will become a breakthrough.