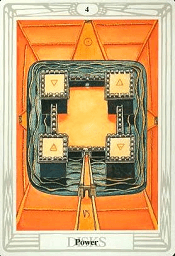 Power – The power of consistency

I. Analyze and describe 4 of Disks Thoth Tarot

On the card, the disks are described as four tower corners of a fortress (the whole view from above). The disks themselves are square and thereby represent four corners as a symbol of worldly stability and reality. It is a vivid system represented by symbols in the four towers, symbolizing the four elements: water, fire, air, and earth. This topic shows the basic structure of the mundane city (human living space), built according to “the temple of Jerusalem”.

“Fortress” represents physical energy (“core”) associated with its image. The power of this card, however, is not in its own shape, but in the form in which we give it structure and meaning and in the way we place it at the heart of our considerations. On the negative side, it corresponds to a person’s efforts to build reality in the effects of eternity and worship it. On the positive side, however, it is consistent with “higher” clairvoyance that such patterns of thought and reality may be useful, but should never become absolute truths. Instead, they should still be useful models.

This card shows us the perfection of creativity, as well as the discovery of its hidden meaning which is the task of mankind. The layout of the Mandala model of a four-part structure is always an icon representing the whole, and therefore, stimulates the observer to check how the four towers in his being were formed, where he exaggerated, and which side had been forgotten.

This card refers to stability, structure, clarity, order, and consistency. Therefore, it is a sign of the consolidation stage in which what has been achieved is also guaranteed. In addition, it shows the successful working stages in which plans are realized and positions can be expanded.

It shows stability and therefore, also refers to the ability to have a strong, long-term relationship, to clarify misleading situations in a relationship, or to tighten existing relationships. However, this card also mentions a warning that excessive safety is likely to kill a relationship.

Fortress = A strong sense of keeping things outside and inside. The castle is at the center of the card representing ourselves and material possessions.

Drawbridge = show that we have control over what we let into our lives and what we give.

4 towers = represent the 4 disks, each one containing one of the elements.

6 crenulations = 6 is the number of the Sun.

Southern gate = the main entrance to Malkuth, where most of this card’s power is directed. It is reinforced by Capricorn’s glyphorn on the road, thus, proving that this card refers to how we empower ourselves in the real world.

Northern path = inscribed with the sun is inaccessible from the fortress.

Elements = all separate and stable. 4 is a stable number. Elements that are contained in a closed structure mean nothing is lost, security and strength in all aspects of our being. There is a solidity about us, the castle is solid but not excessive (unnecessary). All elements combine to form the physical world.

Spirit is missing and there is a sense that this is a very material card.

Moat = our boundaries and knowing where they are and a restraining factor.

V. 4 of Disks Thoth card in the upright and reverse

Financial and physical security is important to you and you have a solid foundation.

Ready to work for what you want.

Confidently apply yourself to the world.

Being a reliable person who acts with integrity.

Completing our personal goals and dreams.

Not sharing enough of what you have.

Becoming too materialistic and using material success as an end in itself.

Financial insecurities about the future.

Sticking to the letter of the law without empathy.

Need to be more generous.