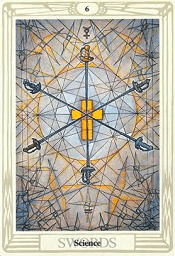 I. Analyze and describe 6 of Swords Thoth Tarot

On the card, the six swords folded into a six-pointed star shape (made up of two triangles joined together), symbolizing the intrusion of the invisible and tangible world. The tips of the swords touch the center of the red rose cross, which is also the heart of the cross engraved with the yellow rose made of six squares: the symbol of harmony and the desire to be introspective with the observation from the outside. This external effort (square) to find the truth hidden within (circle) corresponds to the journey of the inherent freedom to all wisdom: the desire for freedom due to the understanding of natural laws within. This card represents the craving for science but also maintains respect for the mysterious laws of life.

Mercury at the Aquarius (6) follows the law of cause and effect in the balance of the 4 of Swords Thoth card, meaning that in addition to the law of cause and effect, there are many processes of analogy. This corresponds to explanations about synchronization and the targeted “coincidence” (C.G Jung), and in terms of idealism, this card represents the relationship between things. Therefore, they are part of the whole, and similarly, each individual is also a united block. Mahmud Shabistari once said: “Each individual is recognized as part of the unified whole and each individual contains a whole world within!”.

This understanding gives us a deep and comprehensive way of thinking, whereby all discord is finally reconciled and the views of each individual are absorbed by the partner. We identify ourselves as those who transmit spiritual messages, carry the new era and important orders and realize the need to let others participate in the process of distillation this knowledge.

The card shows the ability to mediate and connect people and resolve conflicts in the work environment. The new perspective has helped us overcome conflicts and lead us to very creative and unique solutions to problems that seem impossible to solve.

This card represents a stage where the balance between emotional needs and ideas about the soul is optimal. This period was conducive to resolving previous blind issues and building or expanding a harmonious relationship.

Rose Cross = The cross is the cube that is folded and represents a human being in the world and all that he has. It represents the consolidation of the macrocosm with the microcosm. We are all unique expressions of one source, God. Looking at the meaning of the card from the rose cross, it implies self-development through solving the problems of life and development from experiences, good and bad.

The circle, Square and Background Lady Harris explains the pattern in the background, along with the circle and square, in the little instruction booklet with the Thoth Deck.

Hilts of the Swords = All have different colors representing the path of the planets in Atziluth (Snuffin). They form a hexagon; The combined triangles mean “as above so below”.

Swords coming together on the Rose Cross = The cross is the central point of the cards. The cross is the yellow color of the Sun ruling Tiphareth, with the cross itself being the womb of creation. So, we have the cross (sun or son) of the father in the mother’s womb.

V. 6 of Swords Thoth card in the upright and reverse

The intellectual clarity through learning from difficult experiences (the previous 3, 4 and 5 swords), we have developed through difficult times and can now handle the living and being able to make intelligent decisions that benefit our lives. Therefore, there is a higher level of awareness for our thoughts and actions.

Trying to solve things yourself through trial and error.

It may mean a situation is getting better, something that they cannot really grasp. Now, they are devising a better approach to handling situations.

A willingness to learn.

Keeping repeating similar mistakes. Do not learn from our experience.

Being overwhelmed by emotions and unable to see through the problem at hand.

Think too much and do not follow the flow to escape the situation.