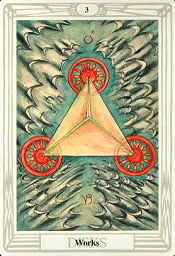 Work – The power of stabilization

I. Analyze and describe 3 of Disks Thoth Tarot

In the center of the card, there is a pyramid of light located on three wheels of the trio of body, soul, and mind (in alchemy, they are sulfur, salt, and mercury). The initial polarization (2 of Disks Thoth cards) turns into three aspects of our reality, corresponding to the number 4 (represented by the pyramid formed from triangles with four corners). This pyramid lies “in the great Binah Sea at night” (Crowley) on the ocean of eternity from which tangible forms appear to represent our reality, but not an all-inclusive reality. The three wheels correspond to the three circles at the heart of Ace of Disks Thoth card, which opens their power here and forms into the forms of reality from the endless potentials of the original origin.

This card embodies the connection between the material trend of the 2 of Disks Thoth card and the completed materialization of this card, specifically, it is “the first thing that becomes tangible to condensation in the matter”. It represents the budding practical principle, the attractive power of growth, or the outward-looking struggle to achieve (work) in which it grows outward and begins forming walls that afterward, the ego in the next card (4 of Disks Thoth card) can protect itself.

This card shows us the limits in our mundane views. If, for hundreds of years after the view that the earth revolves around the sun, we still let the sun revolve around the earth in our daily reality, then, in order to truly how difficult it is to really understand the rules and time of our wonderful space and time (which is perfectly functioning in this world now is no longer valid when it goes beyond our planetary system) nor can it be understood that parallel lines can intersect.

The “Work” card represents creative strengths, whereby, at any time, we achieve success when choosing the best from a range of possibilities. This card shows that we have started new plans, or we are doing quite well in an existing project through good work. In any case, it means that we have passed an old level and can thus achieve a new beginning in better conditions.

This card shows that we have a stable time ahead, during that time, the wishes and intentions we long for could become a reality. Just like the ocean in the picture representing an infinite number of possibilities, the three wheels are the powers of body, soul, and mind, creating a clear and harmonious structure from the possibilities through their combined effects. From a different perspective, this card represents a creative phase in a cooperative relationship as well as the construction of new structures of relationships.

Red Pyramid = the influence of Mars. The pyramid represents ideas and focused points that allow something realistic to be born from an idea or project.

These indicate balance and harmony in this card.

Background = the “solidified” sea of Binah, the mottled appearance showing its solidification. The ice has melted around the pyramid allowing it to “rise” from the sea.

V. 3 of Disks Thoth card in the upright and reverse

It refers to the reward for your hard work and dedication. Your skills and knowledge will take you forward from your current position.

You can achieve good results for business projects, careers, and practical matters in general.

It also shows the need to follow things that respond to your body, mind, heart (3 wheels in balance).

You are reaping rewards for what you want to do in reality and live a balanced life.

Trouble in the working environment.

If you do not set the mind on the job, it will show in the results.

Lack of confidence to advance in your career.