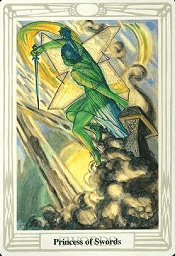 The daughter of the Air (wind)

I. Analyze and describe the of Princess of Swords Thoth Tarot

This card represents the aim of an unreasonable assertion of women’s power and the Earth aspect of the Air element, “the appearance and congestion of the unstable things” (Crowley). This young and powerful energy source, embodied through the energetic movement of the arm, is very reckless and hasty. At the same time, it expresses innocence and ignorance, when compared to childishness corresponding to unconscious desires rather than conscious will, they actually mean to cover a large part of real goals rather than our thoughts.

Crowley wrote: “She stood in front of the simple altar as if she wanted to take revenge on contempt and blasphemy and she stabbed the sword”. This external attitude is an expression of conflict with the altar itself, the symbol of wisdom, patience, and maturity of the soul, and in general, symbolizing the development of mental qualities from all desires for revenge. Her aggressive posture is the representation of an Amazon warrior (daughter of the arena), the sky and clouds are full of anger, and on top, she wears a protective helmet with snakeheads – Medusa.

She, therefore, will represent intense impulsivity, and similarly, will represent a spontaneous reaction, expressing herself directly to the world, the “inner child” perceiving the world through the right hemisphere (unconscious); This impetus will reinforce the rich knowledge to not only react to the surrounding environment but also directly impact them.

Princess is a symbol of the aspiration to act or turn all ideas into reality, she represents the will to act in a pure and primitive way. In Greek mythology, we find this energy personified in the Amazon female tribe that the two Queen Penthesilea, the daughter of Ares and Otrera, fell into Achilles’ hands; in the  Western Norse mythology, it is Valkyries, the Teutonic battle between virgin girls, who participated in the battle, won the victory and chose warriors to destroy.

II. Interpretation of the Princess of Swords Thoth Tarot

This card shows a young woman who knows how to constantly sharpen her intellectual capacity (and her communication skill). By doing so, she will shine with grace, impressive reasoning, or exaggerated images, she represents the type of woman that is too masculine C.G Jung describes. This woman claims some of the ideas are completely unfounded (usually more than one at a time) with a sharp tone, the simple goal of this is to shut the mouth of others. Accordingly, this card represents a controversial person.

2. Overview of the Princess of Swords Thoth Tarot

Like all princesses, the Daughter of Air (storm clouds) also mentions accessing to pure energy that contains both negative and positive aspects. She is the embodiment of the threat of conflict, or vice versa, an opportunity to resolve conflict through a frank conversation in which the objectivity and analysis of another person will help us get solutions to our troubles.

In terms of cognition, we tend to be toward the slow and the hustle, provocation and intense aggression. We attract contradictory situations in which we are attacked and troubled by our existing thinking habits and intellectual visions. Does this lead to failure for us or will it nurture our perception, which ultimately is a matter of maturity, will to learn, and the change in our way of thinking?

In terms of this aspect, the card means that we must prepare for conflicts, animosity, discord and possibly even writing battle. With this context, it can show the beginning of the process of ending our current work. And it can also signify the fresh and cold wind that blows away the problems in space and brings the freshness of our work environment.

In terms of personal relationships, we find ourselves in a conflict caused by a partner or it could be a threat to the relationship. And we often lose the ability to deal with the opposite sex and put more pressure on others. Accordingly, this card represents a clear discussion, but often it mentions debates that have begun and will not lead to a new cognitive perspective.

III. Similar correlations of the Princess of Swords Thoth Tarot

IV. Princess of Swords Thoth card in the upright and reverse

Being skillful in practical issues, especially where rules are controversial.

Being strong and extrovert in her way. Thus, this card is fighting the battle both within her and in her environment.

Catching ideas based on a tangible way.

There is a destructive way of analyzing things and applying them.

Can be aggressive and take revenge.

Card 1: Central Theme of the Spread – need to fight to keep a clear vision ahead and achieve your goals.

Card 2: Crossing Influences – difficulty in applying yourself due to lack of confidence in asserting yourself.

Card 4: Recent Past Affecting the Situation – one of some dark days, conflict in which you have had to fight to make ends meet.

Card 5: Hopes and Goals – to be more confident and able to put your great ideas into practice.

Card 6: Immediate Future – you have a fight on your hands but you will be at the top as long as you learn to assert yourself more.

Card 7: How you are affecting your situation – can get straight to the point of the matter, say what you feel, can confront, be good at resolving arguments and conflicts.

Card 8: How others are affecting your situation – can fight with the mood of yourself or of close people, people do not respect us properly.

Card 9: Guidance or Warning –  be able to choose our battles wisely so that we do not exceed ourselves; be careful that your actions are done for the best benefit otherwise they can be very destructive.

Card 10: Overall outcome – the need to focus to bring your ideas into reality, choose your fight wisely but not afraid to be assertive in achieving your goals.