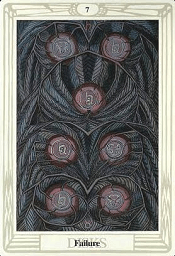 Failure – The power of disintegration

I. Analyze and describe 7 of Disks Thoth Tarot

The card reflects a state of disintegration; after the optimistic dawn of 6 of Disks Thoth card, this card represents the ruin. Crowley wrote:

The disks are arranged according to the Rubeus geomancy character, the ugliest and most threatening character in 16 characters. This is like a bad omen that some geomancy schools destroy the Map and postpone questions for two hours or more when Rubeus (Mars in Scorpion) appears in Jupiter.

Growth is halted here, and we recognize a world of dark blue-violet in the vegetation in which the frames of dead plant produce seven gray disks like Saturn, the symbol of disaster without an end or an unhappy ending does not bring satisfaction.

This card shows the image of burnt or arid land and also points to the struggle to achieve material without a spiritual foundation, social failure or illness of material. In short, it is physical exploitation without an emotional bond with the earth. Life is dried up when in our hearts, we ourselves are too far away from nature, and a full life without natural love is impossible. Saturn is the Prince of Darkness and seven dark disks are considered barren realms of disability and decline; at the same time, it also forces us to be aware of our dark and unloved side, where we face consequences of our own actions, including the effects of our shortcomings. A clear example that we can see is the current environmental issues.

Dealing with questions related to the temporary side and the dark side of life is essential. Saturn, who sets limits, has a strong conflict with the principles of safety, fertility, and perseverance that Taurus represents. On the other hand, the need to realize this — often unpopular — is the task attached to this card.

We can often pay attention to failures during the time that this card represents. In this aspect, in some cases, it may be a timely warning and advice against the intended plan. But when a current situation is represented by this card, optimistic hope no longer exists: the appropriate attitude here is a conscious, realistic reaction combined with a readiness to receive painful results.

This card can be particularly painful because it can show frustration as well as the end of a relationship. Therefore, it may be the messenger of bad times, in which, with impotence, we must look at the vanishing hope, promising beginnings and dissipated development. In some cases, warnings may appear on time to prevent us from taking a painful and dangerous step.

Central sword = knowing what you want; it has a sun on the hilt so this is the sword that represents our “center”. In astrological terms, the sun falls into Aquarius, thus weakening our power.

Surrounding swords = the reasons you are telling yourself about why you cannot have it.

The tents of these smaller swords also have planet symbols on them and in this card, we will have to take on more challenging aspects of the planets and they are not favorably sitting here.

Mercury = (Second right) poor communication within yourself and between others.

Mars = (first left) lack of energy/fight to get around obstacles

Jupiter =  (first right) Luck and life is not on my side, negative self-talk, not staying in touch with the higher self.

Saturn = (third right) too rigid in thought, little flexibility or persistence to get around the problem in hand.

Background = Pale blue, cold looking; not being able to let the warmth and strength of our personality to shine through.

V. 7 of Disks Thoth card in the upright and reverse

Lots of self-doubt at the moment making it seems difficult to be insurmountable.

The mind seems to be distracted at a time when you need to be focused.

Associated Major Arcana is “the Chariot” which is to do with movement and change. So, we need to use this as a motivation to stay away from this negative thought of this card and release destructive patterns in our minds.

Chaos mental thoughts prevail in meditation, and we lack stillness to let go of the mind and worries. We are distracted, so we must be aware of this happening and try to change things in life that are not working. Perhaps, we are even compromising the desire to meditate (the central sword) due to the influence of other parts of our lives (6 surrounding swords). We gave up trying and losing the will to stand up for what we really wanted to do.

Making inappropriate compromise in an effort to ease the mental stress we are feeling.

Appearing others too easily.