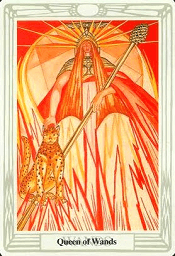 Mother of love and sexual instincts

I. Analyze and describe the Queen of Wands Thoth Tarot

The Queen of Wands sitting on the fire throne symbolizes the connection of emotions into depth. She is a mature image of the Princess, leaving “the snake of fire” to rise to the spiritual level. From the “multicolored fire”, she painted “the fires of affection”, but by ordinary experience, she caused a “sexual fire”.

The leopard beside her is a symbol of trends and power. Her soft hands reflected in her emotional sentimental world that also had instincts. The shining crown with the winged lion’s head represents the mighty power of the creative power we have seen in the previous card (Prince of Wands Thoth). However, in contrast to the outward energy, we are facing an inner journey (which is shown through closed eyes); it is the journey to discover the inner areas of the soul through which the outside world is merely a reproduction.

The first and direct perception with us is that love is the connection with the divine and sexuality – an expression of our will within us, and let us enter the stage of joy that breaks all our imaginary limits. In the light of enlightenment, “when the soul loses itself to an ecstatic state” (Master Eckhart), we experience ourselves as one with one and only a source of primordial energy. “All you need is love”, is what the Beatles presented in 1967.

An irresistible woman that makes men unable to deny her wish (Paris), a burning passionate woman who often deceives her husband Hephaistos to come to her mistresses Ares and Adonis, an avid person (Pygmalion), but also a pathetic and jealous mother-in-law (Psyche). There are only three Aphrodite Goddesses she could do anything about, Athena, Artemis, and Hestia. All other Gods and Goddesses were tempted by her magic.

II. Interpretation of the Queen of Wands Thoth Tarot

As humans, we can see the Goddess of Love in the form of an erratic, strong and charismatic woman who is also self-centered, reckless, full of desire and desire for life, and devotes all passion to her lover. However, usually, she acts like a mature and confident woman.

2. Overview of the Queen of Wands Thoth Tarot

While Prince or Princess of Wands seems superficial, moody and naive, Queen has a much deeper background. She represents the feminine energy of the fire element and is an intelligent, strong and courageous person. Pride gives her great inner strength and power, on the other hand, it makes her too sensitive to criticism as well as the recognition or admiration rejected. She seeks social relations that can bring feelings of love to life. In contrast to earth and water, she did not make much effort for eternal love, but for the temporary passion through which she could enjoy her active love life.

The Goddess of Love (mother of instincts) represents the will (fire) that places herself in the material world but also possesses visions (Water properties of fire) through which she can see through the disguise of the problem. Therefore, her task is to combine two subjective elements – water and fire, and then develop them into her own personal image.

In terms of career, this card shows the desire to have more independence and responsibility. She shows that we are easy to approach and open to greater tasks and to master them with power and faith. She embodies the desire to grow and develop herself, through which we take on new tasks.

The self-determination in this card implies that we become mature in love and since then, we are on par with our partners who have always been predominant. The Goddess of fire that is erratic, dynamic and a woman who knows how and when to assert herself, even against the Knight she wishes to be with. In contrast, King of Wands wanted a partner that obeys to him, Queen of Wands has found a “superior” hero to fulfill her wishes.

III. Similar correlations of the Queen of Wands Thoth Tarot

IV. Queen of Wands Thoth card in the upright and reverse

It is time to solve the difficult problems in the past.

A strong independent leader focuses on his goals and knows what he wants, lives a very active life and has a lot of creative energy and a strong first impression.

It refers to impatience, tyranny, and pursuit of goals until burned, arbitrary, jealous.

Card 1: Central Theme of the Spread – The need to put tough times back, reclaim your personal strength and pursue your goals.

Card 2: Crossing Influences – Problems of the past is restraining you and disconnecting you from your current self-confidence.

Card 3: Subconscious Influences – It implies the need to be more confident and know what we want in life so that the past does not hold us back.

Card 5: Hopes and Goals – It refers to the need to be more confident and know what we want in life so that the past does not stop us.

Card 6: Immediate Future – Creativity, the identification of our direction in life.

Card 7: How you are affecting your situation – confidence, independence, assertiveness.

Card 8: How others are affecting your situation – A person that excels in your life.

Card 9: Guidance or Warning –  Is our need for goals and independence that limits our balance in life? Are we in control of others?