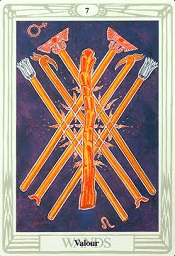 I. Analyze and describe 7 of Wands Thoth Tarot

On the card, we recognize six sticks, two have lotus blooms, two have Phoenix-headed and the last two sticks have Uraeus snakes; each of the three sticks crossed each other. Their effect is to lessen and create the foundation for a vertical curved log bearing the shape of an unpolished stick. This is the hero’s weapon (Mars in Leo) who wants to prove his courage. Crowley wrote: “The soldiers are in chaos; If win, it is because of the personal courage – it is the battle of soldiers”.

There is a mix of bravery and assertiveness with recession and weakness. Crowley considered this card in relation to the Tree of Life as a weak number, belonging to the Earth element, feminine and talking about imbalance and declining faith. Even with the support of Mars (at the Leo), it is still not enough to resist degradation of energy, and it takes a lot of courage to protect oneself from destiny, which will ultimately win.

We face the notion that there are many situations in life in which even our best efforts are not enough. Instead of giving up, the card challenges us to overcome ourselves with brave action and thus, achieving breakthrough success.

The card informs the situation of conflict with the opposing forces that we can hardly balance for a long time. We were attacked, and the first step was to identify ourselves with a quick response but perhaps, also with a strong reaction. This later caused us to be attacked from outside. Only a bold strategy can bring a chance to win.

“Story of two people” makes us confused. 7 of Wands Thoth card must be understood as a stage of development in the emotional process which shows our contradiction – often triggered by a third party – instead of love and harmony. The problem here is to find a positive solution by moving forward – or giving up.

IV. 7 of Wands Thoth card in the upright and reverse

This card might show in a reading when you find yourself in a position where you are forced to fight for what you firmly believe in. While sometimes reluctant to take up the fight, you will feel compelled to stand up and be counted. If you do not stand for anything you stand for nothing.

There may be a situation, in which you are being tested to your limits but your courage and strength, will show through and help you make a success out of your challenges. It also implies a need to show courage when our subconscious wants to hold us back.

Sometimes, instead of getting the support, we are getting competition and so we have to use a lot of our energy to maintain our stance.

This card also tells that you are not always going to be able to please everyone. There will always be those that challenge your perspective which you must defend.

We seem to be fighting a losing battle at the moment and only our courage is keeping us going. We may feel that we are on a sinking ship in the current situation without an insight into the results.

Surrendering to others’ demands against our better judgments.

Protecting our position (or someone close to us at all costs), although not on a higher moral basis.

Stubbornness in recognizing other people’s views.

Depending on the topic of the reading, this may be related to issues of relationship that we are currently running out of energy and the idea of how to maintain it, or this may be related to friendship or the work situation where our spirits are being tested to the limit and we are going to the end of what we can offer.

The lack of courage or energy to face our current challenges or so many other tasks that deplete our energy for our most important challenges.

Fighting with our subconscious thoughts and getting over them most of the time.

Card 1: Central Theme of the Spread – A difficult situation takes up most of your time and energy but you have the strength and courage to overcome this stage in your life.

Card 2: Crossing Influences – Maybe, you are feeling overwhelmed and threatened by people around you or you are being bullied.

Card 3: Subconscious Influences – You are concerned with the feeling that you are not good enough and these things make it hard for you to achieve things without real effort and drain your energy, for example, someone with low self-esteem.

Card 4: Recent Past Affecting the Situation – You have used the character’s power to achieve good results in the past and it may be required to help you confidently move forward in the current situation.

Card 5: Hopes and Goals – You see yourself as a determined and confident person who stands up for yourself, no matter what the opposition is. You also have the courage to face your inner demons as well as challenging situations in your daily life.

Card 6: Immediate Future – There is a situation that will test your determination. You need to be able to listen to others but not overwhelmed by their requirements for your resources.

Card 7: How you are affecting your situation – The tendency to please other people due to fear of conflict.

Card 8: How others are affecting your situation – It implies challenge rather than support, competition rather than cooperation, perhaps in the workplace.

Card 9: Guidance or Warning – You will not always please everyone with your actions but you must stand up for your highest qualities and not be threatened when living a life that others want you to.

Card 10: Overall outcome – There is a tendency to overcome great challenges in your life and the power of purpose increases.