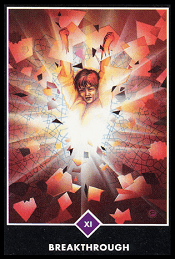 I. The commentary of The Breakthrough Osho Zen

Eye-catching at first sight and the red color of the Breakthrough Osho Zen indicates its theme is energy, power, and strength. Bright light is created from the solar network – the focal point of the character’s power is extremely excited and determined. Sometimes, we all reach a level called “that’s enough”. At such times, we seem to need to do something, anything, even making mistakes, to lift off the burden and barriers that restrict us. If not so, they will be threatened to suffocate and destroy our own life energy.

If you now feel “that’s enough”, allow yourself to break the old patterns dangerously and limits that blocked your flow of energy. At that time, you will be amazed at the vitality and ability that this “Breakthrough” can bring to your life.

II. The meaning of The Breakthrough Osho Zen

Converting disruptions into breakthroughs is a master’s comprehensive function. Psychologists simply patch you up and that is- the function. He is not there to transform you. You need meta-psychology, the psychology of the buddhas.

The Breakthrough Osho Zen is a great adventure in life to overcome an accidental breakup. It is the greatest risk as there is no guarantee that the breakup will become a breakthrough. It does become, but these cannot be guaranteed. Your chaos has been around for a long time – in many previous lives, you were in turmoil- thick and layered. It is almost an inner universe itself. So when you step into it with your small power, it is definitely dangerous. But without facing this danger, no one will become integrated, no one becomes an individual, individually.

Meditation, or thinking, is a method that will help you overcome chaos, overcome the darkness of the soul, balance, order, and warnings. Dawn is not far away, but before you can get to dawn, the night must be over. And as dawn dawned, the night would become darker.

The Stag Wildwood Tarot is the king and guardian of the forest. He is half-human and half-animal, surrounded by greenery. His gaze is very steady and calm. He holds a shiny hatchet and a shield in his hand.

Justice Deviant Moon Tarot involves moral sensitivities and that gives rise to empathy, compassion, and a sense of justice. Since Solomon’s time, this image has represented a standard for humane and equitable treatment of other living beings.