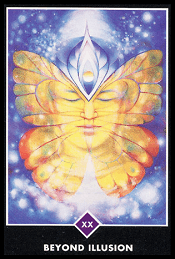 I. The commentary of Beyond Illusion Osho Zen

The butterfly in this card represents the external world, which is constantly moving, which is not real, but just an illusion. Behind the butterfly is the face of consciousness, observing inner, and looking for eternity. The gap between two eyes has opened, revealing the blooming spiritual lotus and the rising sun of awareness. Through the Sun, inner is raised, and meditation is born.

The Beyond Illusion Osho Zen reminds us not to look at the surface of the fact, but to look within it. When we “judge the book by its cover”, we are usually affected by the thoughts that – this is good, this is bad, I want this, I do not want that. These judgments leave us trapped in our own illusions, sleepiness, old habits and rules. Let’s refresh your mind, and focus on the inside. There, you can relax within your own deepest truth, where the difference between dream and reality is shown.

II. The meaning of Beyond Illusion Osho Zen

The only difference between the dream and reality is: Reality allows us to doubt, while a dream does not…

Personally, the ability to doubt is one of the greatest blessings to humanity.

Religions are each other’s enemies because they have cut off the root of doubts, and the reason for their action is because they want people to believe in certain delusions that they have been preaching…

Why some people like the Buddha Tathagata claim that all existence – except your own witness and awareness – is just ephemeral, created by the same thing which formed the dream. They will not say that these trees are not there, or these poles are not there. Please, do not misunderstand the word “delusion”. It is literally assumed as delusion, but actually delusion is not the right word.

Since it does not really exist, but reality does. Maya (the veil of illusion) is only in the middle – it almost exists. It only becomes a reality when all daily activities are concerned. Only in the absolute sense, from the top of your enlightenment, it does become unreal, illusory.

The Judgement Rider Waite Tarot shows some of naked men, women, and child rising from their own graves, their hands extended toward Archangel Gabriel who is blowing the trumpet above them.

The Great Bear Wildwood Tarot Card is located in the winter solstice on December 21. The element of this card is Earth. The Great Bear is associated with the image of the dark sun, guarding the gate between death and revival. The card also holds the secret of rebirth and healing.

The Judgement Deviant Moon Tarot indicates a cycle is about to end and you have to prepare for a new stage of advancement. You are reaching an important milestone for your development.