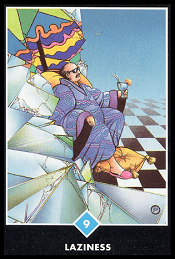 I. The Explanation of Nine of Water Osho Zen Tarot

This gentleman obviously thought he had finished everything. He sat in his big armchair, wearing his sunglasses, covered by his umbrella, wearing his pink slippers and holding a pina colada in his hand. He didn’t have the energy to wake up and do anything because he thought he had done it. He still hadn’t turned around to look at the mirror cracking around him on his right – a sure sign that the place where he thought he had arrived was finally about to crumble and melt in front of his eyes.

The message of Nine of water Osho Zen is that this poolside resort is not your final destination. The journey is not over yet because the white bird flying in the vast sky is trying to show us. Your complacency may arise from a real perspective of accomplishment, but now, it is the time to keep going. No matter how fuzzy the slippers, how tasty the pina colada, there are skies upon skies still waiting to be explored.

II. The Energy of Nine of Water Osho Zen Tarot Based on Osho’s Teachings