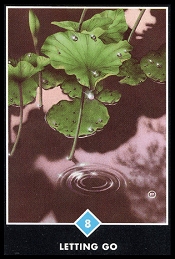 I. The Explanation of Eight of Water Osho Zen Tarot

In the image, there is a lotus leaf in the early morning, we can see the water surface is rippling when the water drop falls. It was a precious and yet painful moment. In the pull of gravity, the water droplet slipped out of the leaf and lost its previous form. It blends itself into the vastness of the water below. We can imagine that before falling down, the water droplet must have very vagued at the boundary of the known and unknown.

When eight of water Osho Zen appears, it signals: something has finished, something has ended. Whatever it is – a job, a relationship, a home you adore, anything that helps you recognize who you are – this is the time for it to leave, to accept grief, and don’t try to hold on. Something more wonderful is waiting for you, a greater aspect will be discovered. You have come across a milestone, which cannot be returned, and gravity is still doing its job. Follow it, it represents liberation.

II. The Energy of Eight of Water Osho Zen Tarot Based on Osho’s Teachings

In existence, there is nobody who is superior and nobody who is inferior. The blade of grass and the great star are absolutely equal… But man wants to be higher than others, he wants to conquer nature, hence he has to fight continuously.

All complexity arises out of this fight. The innocent person is one who has renounced fighting; who is no longer interested in being higher, who is no longer interested in performing, in proving that he is someone special; who has become like a rose flower or like a dewdrop on the lotus leaf; who has become part of this infinity; who has melted, merged and become one with the ocean and is just a wave; who has no idea of the “I”. The disappearance of the ”I” is innocence.