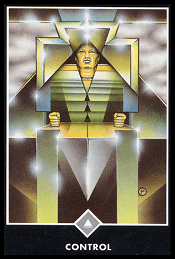 I. The Explanation of King of Clouds Osho Zen Tarot

There will be times and places where we need to take control, but if we control our lives, we will become very demanding. The figure is encased in the angles of pyramid shapes that surround him. Light glitters and glints off his shiny surfaces, but does not penetrate. It’s as if he is almost mummified inside this structure he’s built up around himself.

His hands clenched, his gaze blank, almost blind. The lower part of his body beneath the table is a knife point, a cutting edge that divides and separates. His world was well-organized and perfect, but it was not alive – he could not allow any improvisation or weakness to enter.

The image of King of Clouds Osho Zen reminds us to take a deep breath, loosen our neckties, and take it easy. If mistakes happen, it’s okay. If things get a bit out of control, just what the doctor ordered. There are many, many things in life that are more important than being “on top of things.”

II. The Energy of King of Clouds Osho Zen Tarot Based on Osho’s Teachings

Controlled persons are always nervous because deep down turmoil is still hidden. If you are uncontrolled, flowing, alive, then you are not nervous. There is no question of being nervous – whatsoever happens, happens. You have no expectations for the future, you are not performing. Then why should you be nervous? To control that mind, one has to remain so cold and frozen that no life energy is allowed to move into your limbs, into your body. If energy is allowed to move, those repressions will surface.

That’s why people have learned how to be cold, how to touch others, and yet not touch them, how to see people and yet not see them. People live with clichés – “Hallo. How are you?” Nobody means anything. These are just to avoid the real encounter of two persons. People don’t look into each other’s eyes, they don’t hold hands, they don’t try to feel each other’s energy, they don’t allow each other to pour – very afraid, somehow just managing, cold and dead, in a straitjacket.