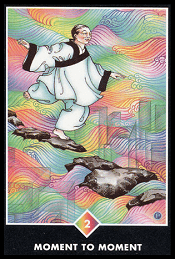 The Explanation of Two of Rainbows Osho Zen Tarot

As this figure moves across the stones, he steps lightly and non-seriously, and at the same time absolutely balanced and alert. Behind the swirling, the ever-changing water flow we can see the shape of the building; there appears a city behind the background.

The man is in the marketplace but at the same time outside of it, maintaining balance and being able to watch from above.

Two of Rainbows Osho Zen challenges us to move away from anxiety with other spaces and times, and in an alarming state of what happens here and now.

Life is a vast ocean in which you can play if you drop all your judgments, interests, and the attachment to the details of your long-term plans. Be ready to come your way, as it comes to itself… And don’t worry if it is chaotic and fails, encourage yourself, wipe off the dust, have a good laugh, and carry on.

II. The Energy of Two of Rainbows Osho Zen Tarot Based on Osho’s Teachings

The past is no more and the future is not yet: both are unnecessarily moving in directions which don’t exist. One used to exist, but no longer exists, and one has not even started to exist.

A man who wants to be in the present has not to think, has just to see and enter the gate. Experience will come, but experience has not to be premeditated.