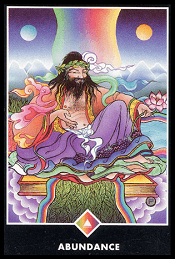 I. The Explanation of King of Rainbows Osho Zen Tarot

This Dynosius-like figure is a man who is a “Zorba Buddha” who drinks wine, dances on the beach, and sings in the rain while enjoying the depths of understanding and wisdom that belong to the sage. He holds a lotus flower in one hand, showing that he respects and contains within himself the grace of the feminine. His exposed chest (wide-open heart) and relaxed stomach indicate that he is also comfortable with his masculine as well, extremely liberal.

The four elements of earth, fire, water, and air all converge on King of Rainbows Osho Zen, who is sitting on the book of the wisdom of life.

If you are female, King of Rainbows will bring masculine energy to support your life, along with your existing partner. For males, this card represents a time to break the conventional stereotype for men and to make mankind’s fullness uplifted.

II. The Energy of King of Rainbows Osho Zen Tarot Based on Osho’s Teachings

In the East people have condemned the body, condemned matter, called matter “illusory,” Maya – it does not really exist, it only appears to exist; it is made of the same stuff as dreams are made of. They denied the world, and that is the reason for the East remaining poor, sick, in starvation. Half of humanity has been accepting the inner world but denying the outer world. The other half of humanity has been accepting the material world and denying the inner world. Both are half, and no man who is half can be contented.

You have to be whole: rich in the body, rich in science; rich in meditation, rich in consciousness. Only a whole person is a holy person, according to me. I want Zorba and Buddha to meet together. Zorba alone is hollow. His dance has not an eternal significance, it is momentary pleasure. Soon he will be tired of it. Unless you have inexhaustible sources, available to you from the cosmos itself…unless you become existential, you cannot become whole. This is my contribution to humanity: the whole person.