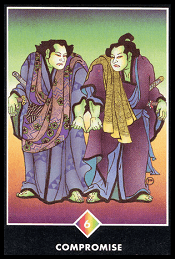 I. The Explanation of Six of Rainbows Osho Zen Tarot

In the courts of ancient Japan, the male attendants were often chosen from the ranks of petty criminals who were castrated. Because of their familiarity with their court activities, they are often at the center of politics, social scams, and exercised a great deal of power behind the scenes.

The two figures on Six of Rainbows Osho Zen remind us of the gentle and mysterious situation we might get into when dealing with our own truth. It is a condition to meet others in the middle of the road, to understand a matter of our own different vision and work based on the harmony of the opposing forces. It is quite another to “cave in” and betray our own truth. If we look deeply into the problem, we often seek to achieve something – whether it is someone else’s power or approval. If it’s the temptation, beware: the prize of this kind of compromise often leaves a bitter taste in the mouth.

II. The Energy of Six of Rainbows Osho Zen Tarot Based on Osho’s Teachings

This compromise will be more dangerous, it will confuse you more because made out of confusion, it will create more confusion. So try to understand why you hanker for compromise. Sooner or later you will be able to understand that compromise is not going to help. And compromise may be a way of not going in either direction, or it may be just repression of your confusion.