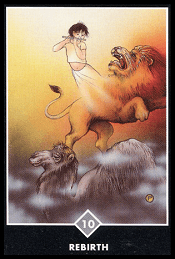 I. The Explanation of Ten of Clouds Osho Zen Tarot

This card describes the evolution of consciousness as it was described by Friedrich Nietzsche in his book, Thus Spake Zarathustra. He talked about three levels: Camel, Lion, and Child. The camel is sleepy, dull, self-satisfied. He lives in delusion, thinking he’s a mountain peak, but really he is so concerned with others’ opinions that he hardly has any energy of his own. Emerging from the camel is the lion.

When we realize we have missed life, we begin to say no to the needs of others. We leave the crowd, lonely but proud, shouting our pride. But this is not the end. Finally, the child who stands out, neither endorsed nor rebelled, but innocent and spontaneous in his own right.

No matter where your space is now, sleepy or depressed, growling or rebellious, be aware that it will evolve into something new if you accept it. It is time to grow and change.

II. The Energy of Ten of Clouds Osho Zen Tarot Based on Osho’s Teachings

In Ten of Clouds Osho Zen tarot, you are coming from nowhere and you are going to nowhere. You are just now, here, neither coming nor going. Everything passes by you; your consciousness reflects it but it does not get identified.

The mirror does nothing, it simply reflects. Your consciousness is only a mirror. Neither do you come, nor do you go. Things come and go. You become young, you become old; you are alive, you are dead. All these states are simply reflections in an eternal pool of consciousness.