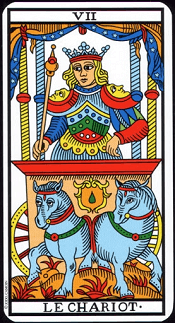 I. Overview of the Chariot – Le Chariot Tarot

The Chariot- Le Chariot Tarot is the number 7 in the first series of the Major Arcana. This is a prime number that can be divided evenly only by 1 and by itself, and it is also the most dynamic number in all odd numbers. The Chariot is, therefore, an outstanding symbol of action in all areas, in the self and in life. In contrast to the Empress, who owns the corresponding position on the ground and is a sign of an explosion without the intention of forming, the Chariot knows very well what it is aiming for.

The card consists of three basic realms: two horses, a means of transport/a chariot, and the person controlling them, he may be a Prince because he wears a crown. We only saw the upper half of his body from the waist up. Some people who read the card, being influenced by their own predictions, consider him a dwarf with atrophied legs or a disguised woman. But the face he gives us from the beginning shows that he is steady and noble. The chariot – Le Chariot Tarot, a square of human skin, was buried on the ground, allowing us to assume that he was not moving forward. In fact, he is moving along with the planet’s flow, an extraordinary form of remarkable movement. Because of being one with the Earth, the Chariot did not need to move forward. It is a mirror that reflects the planet’s rotation. The prince’s chariot could be the Great Bear, Apollo’s solar chariot, or of the knight in search of the Holy Grail.

Two horses are described as the Fool’s dog, with a light blue colored skin. Once again the animal nature is enhanced. Moreover, we can assume that the horse on the right side, with long eyelashes and closed eyes, is a feminine element, and the other is a masculine element. Two complementary masculine and feminine energies are being consolidated here. While their forefoot appears pointing in opposite directions, their head and gaze are pointing to one side: it is because they represent the unity of opposites in the enthusiastic aspect. The breasts of the two horses are marked with alchemy symbols for gold: the animal instinct is working with full awareness.

We can see the green drop of water in the center of the orange-yellow badge on the chariot of skin-colored. At the center of the flesh with the ability to easily disintegrate, there is an eternal drop slipping into the mind and asserting its immortality. Some myths claim that among the human body’s cells, which are not permanent, only one cell has the ability to survive physical death. The Chariot – Le Chariot Tarot carries our hope of immortality in the green drop, non-personal awareness is closed to the material center.

If we look at the position of the character, we will notice that his head, his arms, and his body form a triangle shape that fits well into the square of the chariot. A triangle inside a square: soul in the material. We will see this symbolic geometry again in the 7 of Pentacles. The Chariot has thus aroused the quest of alchemists: the materialization of the soul and vice versa. From this point of view, we can say that the chariot represents the body; horses symbolize energy and characters symbolize the mind and soul.

The skin-colored scepter in the prince’s left hand may mean that he dominates the material life, or he takes energy from its reincarnation. In any case, he took actions without much effort. Similarly, he does not need the reins to control his horses. Twelve stars above his head show him taking action with enormous power. A crown located on the top of his head seems to be broken as if to show its openness to the resources of the galaxy. However, there is a cover over his head, blocking the horizon from the sky above. The Star (the Major card XVII) will be the thing to lift this cover.

Two masks on his shoulders represent the past and the future, the positive and the negative, or the time and space, where he is the intersection point and the merging point of these two things. Taking action completely in the present, he is open to the past and the future, joy and sadness, light and darkness. The Chariot- Le Chariot Tarot is a complete individual who works on three aspects at the same time. We can see in his right hand, there is the circle of white egg or sphere that we have examined under the armpit of the Fool. It was a secret he was hiding, a sphere with mysterious perfection.

Chariot – Le Chariot Tarot is often considered the conqueror who performs powerful actions, or a lover with triumphant sexual instincts. Sometimes, he signals a long journey. Some even consider him a sign of success on TV or movies because this character appears in a frame like a puppet in the theater. In any case, this is a card that goes towards success. The dangers for him are the lack of care and the inflexibility of the conqueror who does not have any doubt about the legitimacy of the conquest. As a manly and extremely energetic card, it is sometimes interpreted as a signal for a girl to find out that in the past, her parents wanted a son. Chariot also urged questions about the methods that a person performs in life and about the way a person guides his/her life.

When the Chariot – Le Chariot Tarot speaks up

“I am extremely energetic. Nothing is wasted; I stick to the planet and be the lover of all the energy sources from it. They motivate my movement. But as an enthusiastic knight, I did not leave my position. I do not crawl on the ground. I looked from above. I travel with time and never leave the present. There is no past, no future, the only time that exists is present, like a gem that cannot be measured. Everything here is available in nowhere”.

“I am the source of all the warriors, all the champions, all the heroes, with all perseverance, and with all courage. Nothing frightens me, no matter what task. I left to fight and feed every citizen on Earth. I am the center of the universe, is revolved by all the energies of mind and matter. If being an arrow, I penetrate my heart, and this deep wound, this awareness, transforms me. For those who are awakened, pain becomes a blessing. I dissolve the pain hidden deep in my bones; I harmonize with and unite the state of alertness and coma”.

“I crossed the dark night of doubt through my own abyss. I disassociate the tangle of mysteries, I go beyond the pain of the creature, I despise the appearance, I release the emotions from reason, I destroy everything against me, I am myself. I want to live as long as the universe”.

“As the center of a growing sphere, I invade the aspect where the mind is clear, where pure action takes place in darkness. I turned the letters into thin dust. There is no reflection that frightens me, even though it is the soul that separated me from the dead like dried fruit”.

“I created diamonds from my misfortune and turned every abyss into an energy source. Even if all the suns can die; I will continue to shine. The extraordinary force that supported the universe also supported me. I am the achievement of life among the emptiness. All deaths and tortures cannot defeat me, including historical revolutions and the continuous decline of civilizations: I am the conscience and the essential force of mankind”.

“When I incarnate into you, every failure becomes a new starting point and ten thousand reasons to give up something that cannot be compared with a single reason to continue doing it. I know the fear, I know the death; they do not stop me. I am the source of action that exists in all living things, the achievement of nature. I know how to create, I know how to destroy, I know how to preserve, and how to do all this with the same irresistible energy. I am the activity of the universe”.

“I approach every dimension of space, breaking the horizon until I reach the goal, and that is the mask of the beginning. I also stepped back, from one space to another, from right to left, up and down, knocking the galaxies out of my way until I dissolved in the horrid absence, which is the mother of the first call for the help of those who have endured everything”.

“I am the result of unity in the crumbling of words, I am the achievement of infinite in the fire that burns the final limits. I am the joy of eternity; in my heart, the gods gradually dissipate”.

The Chariot Linestrider does not hold the reins, the horses are not bound, they are oriented through willpower and balance. Chariot represents a struggle – from within and outward.

The Archer Wildwood wears a simple talisman, present quietly but confidently and intentionally. The two giant hounds beside her are metaphorical images for the messages of strength she holds within her.