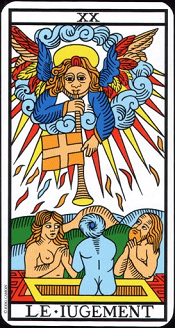 I. Overview of the Judgement (Le Jugement Tarot)

All energy of Tarot cards is concentrated in Judgment – Le Jugement Tarot. Following the reception of the Moon – La Lune Tarot and the new construction in the Sun – Le Soleil Tarot, we can see the production of Consciousness, expressed by the feminine element on the left and the masculine element on the right. This appearance, summoned by an angel and his trumpet, is introduced to us as an intense desire. The work has been noticed. The Yang element in femininity and the Yin element in masculinity have reached peace through prayer. By themselves, they created a divine bisexual character, who obeyed the call of super consciousness represented by the angel.

This creature emerges from the depths and is given a light blue body that makes it impossible to ignore the Devil – Le Diable Tarot (XV). Furthermore, if we stack two cards together, we will see the Devil’s legs almost completely match Judgment’s blue creature’s body, while the bodies of two minions are like two characters who are praying. Another coincidence: Like the Devil – Le Diable Tarot, the angel in Judgment – Le Jugement Tarot seems to stick his tongue out to blow a Trumpet. But while Devil’s tongue was red and aggressive, perhaps cynical and sarcastic, the angel’s tongue imbued with wisdom and kindness.

After staying in the deep subconscious, after a task performed in pain or blindness, a new life awakens, such as the birth or revival. We think of the Last Judgment when death comes from the graves. Everything that is hidden or nurtured reaches the surface with a desire for a new world. This strong thirst makes a sound like divine music. What this card – Le Jugement Tarot implies is the power to challenge death which is going on in our lives: immortal and immaterial consciousness.

It shows in the urgent call that you should live in a different way. The angel was looking straight ahead, and with his mouth and his trumpet, he symbolized the message of this cognitive behavior. The blue cloud circling around him could symbolize an open mind. This openness also manifests itself in the creature’s head rising from the depths of the Earth: the spiritual void he just realized is expressed in a dark blue disk image at the center, is spinning in the light blue whirlwind and then rising to twelve tiers of the trumpet until the golden egg hatches on the angel’s head symbolizing God on duty.

We should note that the speaker emits the music of the Trumpet, which looks like the repetition of the yellow oval: the sound that produces divine nature. Beauty is the sparkle of truth.

The flag that the angel is waving has a bright red cross, dividing the orange background into four squares – four elements of nature, or four energy sources that are then represented by animals of the World – Le Monde Tarot (XXI). From there, we can conclude that the bright red cross shows us that the human tendency is simultaneously living in the world with the link of the necessary duality between the right and the left, and vertically from Earth up to the sky.

When someone draws this card – Le Jugement Tarot, that means that the person has been summoned. The difficulty will arise if people cannot respond to this call for some reason.

Le Jugement Tarot often reminds a situation where a person knows the birth. This includes many possibilities, such as a difficult outrage, pregnancy disorder, or a difficult situation during childbirth that can cause problems. To some extent, whether conscious or not, the person who goes to see fortune telling will live as an unexpected person, an unintended born. Dementia due to failure, despair or incomprehensible difficulties constantly shatters this human heart, towards the bottom of the grave from which he or she is called.

The meaning of the Le Jugement Tarot, including the discovery, through therapies or other means, that each individual is born of the will of God (or the Universe). The difficulties that the person feels, around the topic of life aspirations or artistic/professional tendencies, are many forms of resistance against their deep nature, to a level of consciousness that they (and all of us) give up to the angel. This card may also appear to indicate an action related to judgment or being judged. If the call has a divine origin, then anyone who is on behalf of the judge is a lie. Human judgment has no value here.

For a couple, Le Jugement Tarot urges them to share responsibility, a real or spiritual child, implying that a male/female bond is to produce the third element bathed in love and understanding. The way of expressing the looks is also quite interesting: the woman is looking at the man and/or the child, she symbolizes the love of people and the love of work, while the man eyes heading to heaven, representing the love of the universe and Gods. The angel looks straight at us. His actions are directed at everyone. He reminds us that if we only want the deep desire and divine aspiration to become true, we are just living corpses.

Finally, Judgment refers to the emergence of a desire, a tendency, a call to a certain order. This is the card of ecstasy, a deep rebirth, a prayer that is fulfilled immediately, where the energy from the Earth reaching Heaven, at the same time, goes in the opposite direction. We should realize the last step before coming to the full awareness of the World – Le Monde Tarot.

IV. When the Judgement (Le Jugement Tarot) speaks up

“You drifted along the black river of the Arcana card XIII – La Mort Tarot. You have rooted yourself in the darkness of the Devil – Le Diable Tarot. You are a sad demon holding up your torch as if you are nostalgic for light. When you are wandering at the bottom of the abyss, I do not forget you. Now I can come forward to contact you, but little by little, with great patience because I am very strong. You can integrate with me only when you are ready, when you enter the journey to your deep bottom, when you know all the Yin and Yang in you and regulate them in balance”.

“I bring you light from the whole universe. My strength requires you to get along with yourself so that the new Tree grows from your deepest subconscious areas. Let your nature sink into endless prayer and all your cells know peace. Be like these naked characters, those who accept to put their faith in a higher thing. Without Gods, you cannot exist. When an individual becomes a true believer, an unreasonable child, then and only then will I appear as absolute certainty – like a call from the dawn of time”.

“My music, the divine essence of the world, promotes your strong desire to lift you up. It awakens everything that is asleep, arouses everything that is dead, and opens stones that close the graves. I make your words explode so that through your prayers, you can reach the realm of something that is unimaginable, which dominates the color of space. It is me, I know because I have seen and experienced the Creator. As such, I simply informed about Him. I convey the irresistible call of Consciousness. I am awareness, a miracle in your nature”.

“The certainty is irresistible. When you respond to my call, each of your actions will be like an order I give you. You are no longer hidden in doubt. You strive to act, think, love, live and dream with full of divine aspirations. Life deserves the pain of it; everything will be achieved in calmness, contemplation, kindness, and joy”.

“I come from an unimaginable golden egg in which all creatures and senseless things are just an amorphous light. I am the highest awareness of your soul, your thoughts, things that have become bisexual. I liberate you from the boundary between masculinity and femininity. The circle with the clouds in the sky around me is your exploding blue mind. I permanently erase all boundaries. From one life to another, from one transition to another, with endless joy and certainty, I allow you to be what you always embody: an angel, a messenger of God”.

Calling – Irresistible desire – Awareness – Announcement – Good news – Propensity – Victory – Fame – Future project – Giving life – A happy child – Healing – Music – Openness – Hatching – The work of a couple – Cell of father/mother/child – Love depends on parents – The circumstances of the birth of the person in need of advice – Refusing to behave properly with one’s age – The appearance of a hidden thing – Graceful – Awareness of Consciousness – The demon that has been tame – Streaks towards light.

The Judgement Rider Waite Tarot shows some of naked men, women, and child rising from their own graves, their hands extended toward Archangel Gabriel who is blowing the trumpet above them.

The Beyond Illusion Osho Zen reminds us not to look at the surface of the fact, but to look within it. When we “judge the book by its cover”, we are usually affected by the thoughts that – this is good, this is bad, I want this, I do not want that.

The Judgement Deviant Moon Tarot indicates a cycle is about to end and you have to prepare for a new stage of advancement. You are reaching an important milestone for your development.