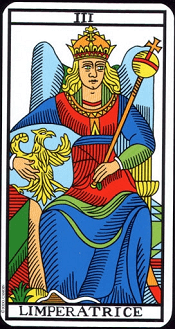 I. Overview of the Empress – L’Impératrice Tarot

Empress – L’Impératrice Tarot, like all cards of the third level, means an explosion without experience. Everything accumulated on the second level exploded in a thunderous way, not knowing where to go. It is a transition from virgin state to creation; it is an egg that has hatched and come to life and the young bird appears. In this sense, Empress returns to the energy of youth with fatal power, charm, and inexperience. This is also a life stage when growth is fully taking place and the body has a special regeneration ability. This is also puberty, the discovery of sexual desire and power.

Empress is holding her scepter, an element of power, one end of the scepter rests on her genitals. Under her hand, a small green leaf is growing: it can represent the nurturing power of nature and eternal spring. The small yellow ribbon at the end of the scepter alluded to her creative ability made with great wisdom. Her legs widened and she was quite comfortable with herself. She could be seen as being in a birthing position as if after a period of pregnancy, she gave birth to herself.

Beside her, on the right side of the card, a baptismal well could be seen. She was ready to baptize others or to be baptized, to celebrate regularly and continuously in life as a new continuous proliferation.

The crescent moon that appeared on her red robe mentioned the recollection of High Priestess. It reminds us that we are not the source of the creative and sexual energy but the sacred energy and the universe travels through us. Her awareness of this power was the symbol of the pale blue throne spreading over her shoulders like angel wings. It stems from the perception that Empress – L’Impératrice Tarot attracts all her strength, charm, and beauty.

Her green eyes are the eyes of eternal Nature in relation to natural forces. She owned a coat carrying an eagle-shaped in the sleeve, was yet to form (one of the sleeves was still incomplete) but able to recognizable. We will know when studying the Major card III that Empress’s eagle is a male while the Emperor’s eagle is the female. The Empress – L’Impératrice Tarot has a masculine element inside. For example, we can see the male neck of her throat: this implies that in the center of the most feminine is male. This is Yang inside Yin like femininity can be found in the center of the most powerful masculinity.

There is a golden pyramid with a shining door shone on her chest. She gives us an entrance: if we can focus on the intellectual light in the heart of the Empress, we can perform creative power. On her crown, there is a jewelry box that truly symbolizes the beauty of spiritual creativity, we can see the great intellectual activity (red ribbon) flowing towards the yellow side of her hair.

We can see a white snake at Empress’s feet: this snake symbolizes the dominant and moving sexual energy, which is ready for awareness. The brick floor reminds us of a palace, but an extravagant tree is growing from it: it is not a fixed and unchanging environment; it continually evolves due to new nutrients, and there is the existence of nature.

The Empress wears a lively red outfit towards the center, but the limbs of it are blue. These are exactly the opposite sides of High Priestess, with a cold blue dress in the center and red in the limbs. High Priestess invites us, but when you enter her, you can freeze and break if you do not know how to treat her. The Empress – L’Impératrice Tarot, meanwhile, was warm inside and put on the cold outside. To integrate into her, it is necessary to seduce her, which is not easy. But once you overcome her defense, you are welcomed into her creative light.

The Empress – L’Impératrice Tarot will inspire creative thoughts, feminine parts in individuals, or even a woman who is full of creativity and energy, lively and enthusiastic. She was ready to cross the boundary, to “explode”, regardless of age. She is the soul of adolescence with its happy fanaticism, the inability to recognize the consequences of action, faith in acting for the purpose of that action. When this card is drawn in a reading for an elderly person, it also refers to the rebirth of energy thinking that has disappeared for long. The Empress recalls the dreams of youth and urges us to imagine from them, longing for the absolute that may have been forgotten.

This card also awakened every similar link for a man, or simply a charming woman who appeared in his life.

In its majesty, the Empress – L’Impératrice Tarot is also a powerful woman with a warm heart but capable of dominating. She loves awareness and rule.

In a more negative sense, the Empress can also point to missed opportunities, or vice versa, a thoughtless action. She can also remind us of the barren, negative image of a woman, a feminine energy source (sexual, creative, intellectual, emotional) which has been prevented during childhood. The hand loosely set on the shield is unclear: it can be seen as an external element that has possessed this woman, an element that seeks to imprison or weaken her. When expressing is disappointing, abused or restricted, the Empress may resent, hate and sell her out.

But when she crowned at the height of her nurturing power, we learned that all life can be seen in her beauty.

IV. When the Empress – L’Impératrice Tarot speaks up

“I am creative without defining stops. I burned in a variety of endless forms. I myself covered the whole Earth with the green after the winter. I myself filled the sky with birds and oceans with fish. When I say “create”, I mean transformation. I was the one who created the seed for the young shoot to bloom. If I start giving birth to children, I can give birth to all humanity. If I talk about fruit, I create every kind of fruit which is known in nature. My mind never rested: a word, a scream, and I created the world. I am a creative spirit. Let’s listen to me and let me act in you because I bring healing: every trouble and suffering from the ego has become fixed due to the inability to create”.

“I am the action, charm, and joy. There is nothing in me that is not beautiful. Not a bit of movement: I am myself, always full and alive. The moment I incarnate to become noble. Nothing or no one can resist me; I am the mundane, spiritual, synthetic charm. In me, there is nothing disgusting, absurd or ugly”.

“Let me rejoice in you: I bring joy into being you, without any prejudice or morality. You are handsome! You are beautiful! The ugliness is an illusion, the constraint imposed by boredom when looking at everything. Every life is desirable. I teach you that all of your ideas are beautiful. You can consider even the worst, most sinful and most serious thoughts in splendor. The richness of thought is allowed. Let your thoughts shine like fleeting stars in the sky of your mind. Nothing binds you to put them into practice. Let them pass with great shapes”.

“Your emotions are also very magical. All of them, without an exception. What beautiful envy! The rage is so strong! Do not build barriers in your fortified castle! Make it a monument with every opened door and window: all emotions are as you want, like a delicate rainbow”.

“All of your desires deserve respect. Let yourself imbued with a desire; everything in your body is harmonious. Every smallest cell is a world. Life is a continuing miracle”.

“If you apply my idea, you will become a shining creature. If you believe in my feelings, you will gain happiness. Every emotion you have is a path to perfection. Believe in your charming power. When the Virgin charmed the Creator, I was there. Without knowing me, she would never attract Him. Seduction is a mystical state: it is an amusing dialogue between the creature and the Creator”.

The Green Woman Wildwood represents the feminine prototype of wildlife and green energy. She embodies the feminine solar energy, along with the generosity of Mother Nature. She was the goddess of the holy land, the Supreme Being – who tested the courage of newcomers.