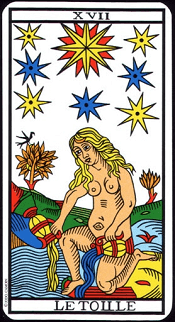 I. Overview of the Star – L’étoile Tarot

The name of the card is ambiguously written allows us to read into many meanings: Le Toille, Le Toule (comes from “spring” or “source” in Oc language), Le Toi ile ( The Isle of You). This Major Arcana card will be the Star – L’étoile Tarot for us. In the card, we see a naked woman beneath a starry sky. Beneath the stars, there is another star: its true being.

Major Arcana card – L’étoile Tarot (XVII) depicts a first naked person in Tarot, before the cards XVIIII to XXI. With her, the adventure of a person who has reached purity and austerity also begins. Beyond her appearances, she has nothing to hide, she only has to find her place on Earth. The attitude of the Star is reminiscent of devotion and obedience: we kneel in front of a temple, or in front of a prince or princess. So, we can say that she is showing respect to the place where she puts herself in it. Her knees on the ground could also be a sign of rooting: she had found the right place on Earth and was communicating with the universe.

In Tarot numerology, number 7 is the highest level of action in the world. There are many connections that exist between the Star – L’étoile Tarot and Chariot – Le Chariot Tarot. Both are rooted in the Earth, and twelve bright stars on the chariot’s platform show its relationship to all things. But while Chariot entered the world as a conqueror, a wanderer, a prince sowing, the Star acted in the world by watering and nourishing it. The character’s bare breasts imply a flow of milk, and we can see there is an allusion to the Milky Way through floating stars. Eight stars indicate that a feature has reached perfection: the perfection of talent.

The Star – L’étoile Tarot is a completely connected being with the world. There is a vase looked as if it is tightly attached to her body, closed to the hip, and the other spread out into the countryside. We can see the image of mental water (yellow) and the water of instinct or sexuality (dark blue) nurturing the environment. It is possible that one of the vases is receptive, capturing the energy of the blue river, while the other pours crystal light into it. There was an orange moon on the woman’s brow suggesting wisdom that became easy to comprehend, allowing her to transmit the cosmic energy through herself, symbolized by the starry sky. She was also a flesh-and-blood creature who created a part of Nature. The symbol on her navel suggested the seed of life. She was sowing fertility, around her, there were trees with orange foliage bearing yellow fruits.

The Star – L’étoile Tarot, the flow of cosmic generosity, poured into the Earth to nourish it. In this card, the wandering journey of the Fool – Le Mat Tarot, belonging to the original energy, has stopped to create a place to communicate with humans. The generous individual becomes a restless spring, giving and receiving in a purified movement. From a psychological perspective, we can say that the Star, while purifying the past, also purifies both the future and the surrounding environment. She gave everything to the surrounding and also for herself, without asking for a return. While expressing her actions, she is making the soil fertile and rich and cleansing the landscape, soil, sand, trees, and water. The vast black array of the Arcana card – La Mort Tarot (XIII), which had become the mysterious base of the Arcana card – Le Diable Tarot (XV), now finds its wonderful expression in the form of a bird preparing to soar to the top of the tree and head to black points of the stars. The power comes from the center of the universe (symbolized by stars), descends with humans, purifies the Earth, and then, returns to the universe according to an eternal round-trip movement. The bird may also suggest an association with the Phoenix, which is always reborn from the ashes (this character can also be seen in 2 of Cups and 4 of Pentacles).

With this feeling, the Star – L’étoile Tarot is a channel of infinity as well as of eternity. If we view the woman’s actions in a negative direction, we can say that the Star card is squandering and demanding rather than giving. Sometimes, she represents the waste of her energy in the past, obsessed with the incurable dementia of the inner child. This is the case of a blood-sucking creature who never feels satisfied, who permanently lives in the feeling of not being loved, invaded or abandoned – who never thinks about giving away – will constantly demanding emotional and sexual energy.

The Star – L’étoile Tarot now, on the other hand, becomes a bottomless hole, dominated by a dark and extreme passion. She could turn into an impudent and shameless person, a poisonous creature, polluting rivers and poisoning the spiritual or material life of those near her.

Speaking of symbols, the Star card – L’étoile Tarot is the spiritual guide that we carry inside to connect with the deepest powers of the universe and Gods. She is a mysterious part of ourselves that we can trust: our “lucky star”.

The Star – L’étoile Tarot represents a stage in which a person finds his or her proper place to act in the world in a way that adorns and nourishes it from the position that he/she makes. Sometimes, it reminds us not to decide on one of the two incompatibilities, instead, we should regulate both of them. This card is usually considered a sign of luck, prosperity, and fertility. It symbolizes generous action. It is also related to sacred love, hope and truth (completely naked emerging the water). It represents a recognition that its author has found his/her place.

For men, this is a great lover or the beauty of the inner femininity that gives him the power to act. For women, it is an awareness of her presence in this world, an act that obeys her longing and deep nature. The conscious and generous connection with Nature of the Star -L’étoile Tarot points to ecology, shamanism, and every faith that concerns this planet, treating it as a living being. If the Star is pouring her water bottles into the past or into emptiness, we will need to ask the question, why does she waste her energy in this way, and does it imply any knot has not been removed?

Along with the nudity and nature of a star, this card refers to the image of Venus, the star of the shepherd, the brightest star to help us to find our direction in the dark.

IV. When the Star – L’étoile Tarot speaks up

“In the infinity of all things, I find my place – in the world and within myself because it is only one. I no longer have to search, no longer have to keep my image, I am in my right place. Here and anywhere, I am attached to my own choice”.

“I am in every dust, in every territory, every stream, every star, and every part of my body. How can I not respect this world, not respect my flesh? All of these materials do not belong to me, I only borrow it in a short period of time. And I respect it because it is my temple – the temple in which God that cannot be imagined reigning. Wisdom is material and material is wisdom, everything is constantly born and broken, and at its center, where I am kneeling, is also where I am standing”.

“If I say ‘I am here’, it means that I am in what is supporting the whole life, with the endless energy that I distribute with my mind, with my heart, with the reproductive organs, the energies of supernatural purity emanating from myself, cleaning the world. I scented fragrant for the atmosphere, added freshness to the water and fertility to the land, and gave the ocean its life. There is no place in this universe lacks my presence”.

“I never give up my existence at every moment. The past and the future cannot bind me, nor plan or regret. Being consistent and loyal to my place, I receive and give. And when saying, “I am of the world and of myself”, it means that I do not hesitate to allow me to remove all criticism to its deepest roots. I do not judge. I love and serve”.

“I do not separate myself, even if it is about the size of a hair. I am happy – I can say that I respect, I submit. That is why I am naked, naked like a tree, like a bird, or a cloud. I am my body, my flesh, my blood, so I feel that I cannot give up because I cannot give up myself. How can I not love what possesses me passionately?”

“As soon as I gave myself to the Earth, I also gave myself to my flesh and bones. As soon as I entrust myself to the ocean, I also entrust myself to my blood. As soon as I dedicated myself to the air, I also dedicated myself to my hair. With the radiant love of this slave, I act for the world, and for myself. In other words, I follow the flow of the world, eliminate obstacles and transmit energy from the other side of the stars. Everything I can do is to cultivate, purify, nourish, and understand. I also acted like that for myself. I open my way to infinity, I let God’s breath flow through every pore on my skin; I did not resist the flowing blood in my veins, I allow all my secrets to pass through me. And from my midst, now has become endless, I accept and allow the Whole of light to be born”.

Success – Luck – Truth – Generous – Selfless action – Performing two actions or having two relationships at the same time – Finding your place – Praise – The real woman – Feeding milk – Prosperous Women – The wound on the knee – The ideal lover – A gift or waste (Depending on the direction of the Star – L’étoile Tarot pouring water from the vases) – Nostalgia (If she was looking at the past) – Purifying the world – Ecology – Spring – Irrigation – Receiving universal energy – Hallowmas a place – Harmony with Nature’s power – Paradise – Aquarius – Shaman Religion  – Beautiful witch.

The Star Shadowscapes Tarot card refers to holding on to hope, a firm belief in the future, inspiration, finding tranquility and calmness of one’s own, finding serenity amid difficult times, harmony integration, sharing, and tolerance.