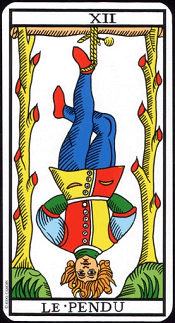 I. Overview of the Hanged Man – Le Pendu Tarot

The Hanged Man – Le Pendu Tarot, the Major card XII, corresponding to the second level in the second decimal period and to the High Priestess in the first cycle. Like her, he pointed to the state of accumulation, imprisonment, and seclusion. He has hidden from the human world, the only link left is a rope that ties him up with a red horizontal pillar between two trees which he hanged in. We can see that starting with the Major card XI, all numbers are completing the process towards the original source of energy below the abyss of the subconscious. Hanged Man followed this attraction and headed to the abyss, and through his accumulated nature (no. 2), he expressed it with a complete postponement, he hung himself upside down, his hair was down to the deep roots of the matter.

If High Priestess is hatching, Hanged Man is being hatched: he has entered pregnancy to create a new life. Once again, we will see the symbol of the egg described in the Major card number II. If High Priestess is a mother, Hanged Man is a son. We can imagine that Hanged Man is a fetus inside card number II. He hung himself in a suspended way between the Sky and the Earth, waiting to be born. His foot posture is quite similar to the Emperor: one leg stretched out and the other crossed. But the Emperor crossed his legs in dynamism, with one leg pushed forward, ready to act. The Hanged Man – Le Pendu Tarot, on the other hand, he pulled one leg behind the other to keep himself more fixed. Even his hand, symbolizing his ability to function flexibly, was also crossing behind him. He did nothing nor made any choices.

On two side of the Hanged Man – Le Pendu Tarot, we see branches that have been cut and sacrificed. In the preparation for this physical and spiritual birth, a pause is essential. This is a stop caused by disease as well as a stop that is totally agreed to allow for a state of meditation. On the spiritual side, Hanged Man stopped the homogeneous comedy of the world with his spiritual theater; he dedicated himself to the concerns of the self as a sacrifice for his inner work. In this sense, his fall was a bounce.

We can also see, in the opposite direction of vision and perspective, the hanged state of his body: wisdom has been thrown down and reason has stopped controlling behavior while the mind is more receptive to the inner intellect, this can be seen through his dark blond hair. Our perspective of life has changed. We disconnect from the views of the world that inherited from childhood, with its illusionary army, to enter its unique core truth. Looking from this perspective when reading, the Hanged Man – Le Pendu Tarot will often bring us back to understanding the bond between the reader and his/her family genealogy.

The posture of this character, heading down, reminiscent of the image of the fetus in the uterus of the mother, and it can cause Tarot readers to ask questions to whom the cards are talking about their pregnancy or childbirth, or about any injury from pregnancy that this person has experienced in the past. Two trees with truncated branches can be interpreted as two “trees” or fathers and maternal lineages, whose habits of abuse or their neurological state has caused us to be suspended as a sacrifice in helplessness, concealing behind our backs – just like this hanged man with his hidden hands – the secrets of shame. This card sometimes shows sin and virtual crimes that symbolized by 12 bleeding wounds on the tree and punishment being implemented, or a certain sacrifice is forced to do so. The traditional story about money is falling out of Hanged Man’s pocket, and he is losing his wealth. The more symbolic way of reading is to sacrifice the “virtual wealth” of the ego.

The Hanged Man – Le Pendu Tarot can also take the image of Jesus, and thereby, shows the theme of the gift from a person himself. Then, the 12 branches will represent the 12 apostles, who are sometimes seen as the 12 the direction of the self around the Lord representing the duality of the universe. There are a lot of bisexual signs here: Hanged Man’s bag is in the shape of a crescent moon, but one is to get and the other one is to give away, one is active and the other one is passive. The rope tied and hung him up was a double rope: a rope with a tail bears the shape of a penis while the other one, on our right side, bears the shape of female genital organs. Moreover, at the column point of the rope with the Hanged Man’s heel, there is a triangle placed inside a circle indicating that he is connected to the soul, and that is a bisexual soul. And this alludes to him from head to toe, as we can see dark blond curls lying around a light yellow sun and a moon of the same color.

However, if it is understood that Tarot imbued with the influence of the three major religions, we will also see an allusion to Jewish tradition and 10 Sephirot of the Tree of Life in 10 buttons on the Hanged Man’s shirt. The first button, starting from the neck, has a black dot, which is the origin of creation. The next four buttons will alternate between a positive element and a comprehensible element. The sixth button, corresponding to Sephirah Tipheret, takes on the shape of a sun with eight sun rays, which is the perfection of the beauty that unites all other elements. Next is the alternation between a positive element and a comprehensible element, followed by the ninth button bearing the moon and the tenth is a square, the symbol of the Earth, which is engraved. Hanged Man’s meditation helps him to step up to the knowledge of the universe which exists within him.

The Hanged Man – Le Pendu Tarot refers to the moment of a pause in everything so that we can turn to our advantage by improving our plan in more detail, self-understanding, and internal work. It can also talk about an obstacle or the inability to act. Usually, this card will tell us that this is not the time to make a decision, that the views and situations need to be riper.

Literally, the Hanged Man can be seen as a mirror or a reflected image of Major card XXI, the World, with a similar foot posture. But the woman in the middle of the laurel of the World is dancing, while the Hanged Man is completely motionless. He represents immobility that honors the movement, the fetus in the mother’s uterus, or even a deep touch with the self that will give birth to all the world’s awareness.

IV. When the Hanged Man – Le Pendu Tarot speaks up

“I hang myself in that position because I want to. I was the one who cut the branches. I have freed my hands from the desire to catch, to possess, to hold. I did not leave the world, I just temporarily shunned it. Going with me, you will enter a state where willpower no longer exists, where words, emotions, relationships, longings, needs no longer bind you. To separate myself, I severed the whole connection between the person who joined me and the consciousness”.

“I have the ability to feel myself constantly falling into the bottom of my heart. I was looking for myself through the labyrinth of words. I am a reflector and a thinker. I am not my own feelings; I watched them from an invisible celestial sphere where only peacefulness reigned. From an infinite distance from the river of longing, I only knew indifference. I am not my own body but just a resident in it. To reach myself, I am a hunter willing to sacrifice my prey. I find flaming actions inside eternal immobility”.

“However, the whole universe went through me, coming to fill me with its swirling winds before leaving me again. I am the endless sky, so the clouds fly over. So, what is left in me? A gaze which is not directed at anything, aware of itself, turning it into the ultimate basic reality. Then, I will explode into pure light. The “self” becomes the pole for a dance, the holy water for the thirsty people to drink”.

“It was at this moment that I was fresh air to purify the polluted atmosphere. At this very moment, my restricted body will become the power of the deluge for eternal life”.

“I am simply the beat of the heart to help bring beauty to the boundaries of creation. I became a gentle peace in all the relentless pain, gratitude, and the door that led the victims to happiness, the slope where we slipped to the highest points, is the light of life circulating in the darkness of blood”.

Postponing – Waiting – Immobility – It is not time to act – Hide something – Punish yourself – Fetus in the uterus – Secrecy – Reversal perspectives – See another point – No choice – Rest – Diseases – Pregnancy – Pregnancy status of the reader – Attachment to family genealogy – Prayer – Sacrifice – Gift from the self – Deep meditation – Do nothing – Internal forces gained from praying.

The Hanged Man Rider Waite Tarot card is one of the most mysterious cards in the deck, simple yet complicated, and inconsistent in many ways. As you can see, the character in this card turns upside down, symbolizing paradoxical actions (but true ones) in life.

The Mirror Wildwood Tarot is located at the autumn equinox, September 21, at the gate that leads to the sunrise. The element of the card is Water. The dark sea at midnight takes the soul on a journey to the mysterious island of healing.

The Hanged Man Linestrider is a mysterious card that often appears at transitions when you pause to assess a situation or find a new way of seeing and approaching life.