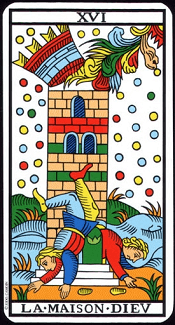 I. Overview of the Tower – La Maison Dieu Tarot

The message of this card is a great mental comfort. However, until Tarot of Marseille was restored, the Tower – la Maison Dieu Tarot was generally viewed as an implication of the Tower of Babel. The most common interpretations are about the punishment of assumption, disaster, divorce, removal, earthquake, and ruins. Oswald Wirth, the creator of Tarot with medieval engravings, envisioned a King and a Queen falling from a tower and added a brick to smash a woman’s head.

If you carefully read the Bible about Babel Tower, you will see its devastation is different from a disaster. The destruction of the tower is a solution to a problem rather than a punishment: the cataclysm has finally come to an end, the entire planet has been watered and become fertile. But humanity remains very little. Instead of spreading out to cultivate crops, they team up to build a tower to climb to heaven and reach God. In principle, this work expresses an act of love, a desire to know the kingdom of the Creator. Now, knowing that this plan cannot be recognized, the Creator did not hit the tower with thunder nor did anyone fall from the tower. He simply created different languages to separate them. This is a blessing rather than a punishment. Humans began conquering the world again and started plowing on the fields.

In the ancient alchemist inscriptions and in the documents of the Freemasonry, we also see that this tower has a door and steps leading to it, sometimes seven steps or three steps. The newcomer must first accept the new knowledge, the symbol of divine creation, then know how to preserve it, and thirdly, to know how to let it go. This is the moment when the green door, the symbol of eternity, adorned with the moon, typical of complete recollection, will open and reveal things inside the tower. This tower is sometimes likened to the furnace in alchemy, in which original problems became the philosopher’s stone.

The Tower – La Maison Dieu Tarot is not the house of God; it is the House/God. Tarot cards suggest quite clearly with bright red bricks, that our bodies contain Gods. The door opens to allow a golden light to leak out: The body is bathed in the light of Consciousness. Human figures are not falling in the middle, but seem to be the opposite. Their hair is yellow, the color of enlightenment, and their hands are touching the grass growing on the ground. In fact, they are honoring the potential of the Earth. Their heads were facing the ground like the Hanged Man – Le Pendu Tarot XII because they were looking at the world in a different way. Wisdom, the mind is looking directly at Nature. A foot of the character is pointing to the sky: his steps are leading him to wisdom.

Two minions in Arcana card XV – Le Diable Tarot have become people and have realized their rise. The yellow plate on the ground can be interpreted as an offering to the temple, two natural gold bars. Two characters climbing up from the cave of the subconscious to pay their respects to the Earth with their offerings and to support Nature. They bring Consciousness into this world by making the earth conceive. Thanks to their actions, the landscape is adorned with blue, yellow and green colors.

Lightning-like entities also emerge from the tower or go into it – the fire, the Phoenix, the lightning – merging with the crown of creation: this is not destruction but the transformation of Material power into spiritual lightning. The bogus bisexual creature in Arcana card XV – Le Diable Tarot becomes a fire that crawls up along the spine and opens the nerve center to plunge into the universe. This entity carries all the colors of the Earth (yellow, red, green, magenta). This is an assumption. In it, we can recognize a shape as a bright red fetus representing the seed of new awareness, the contribution of mankind to the development of all things. The work of creating new species has been announced, a species will have physical form in the Star – L’étoile Tarot (XVII). The ground, embellished with colors, merges with the protruding figures from the tower in the same way that the “flame” merges with the crown.

Like the sixth rank like The Lover – Lamoureux Tarot, the Tower – La Maison Dieu Tarot reminds the unified theme – here, if we accept the homophones in the original French – their union of souls and Gods, this alliance produces droplets of color as condensed crumbs of energy. An excerpt from Indian scriptures says that knowledge like milk, when blending, will appear floating butter on the surface. Similarly, the yellow, red, and blue balls floating in the air take the dance of joy in the universe, as if saying that the stars are our allies and are giving us their energy while waiting for us to wake up. The explosion of the universe can represent the diagrams of existing constellations; as well as the tower, through the decoration, it shows a relationship with the lighthouse. So, these diagrams of the constellations could be a navigation vehicle.

The Tower – La Maison Dieu Tarot signaled the rise of a once-confined thing. It can be a move, a separation, a great moment of expression, a desire to leave a country or to go to another country, or a secret to be revealed. Or even a lightning strike that caused a “disaster”.

As we see, the card also refers to the dance of joyful separation; human figures are actually acrobatic performers in the circus. This may be the birth of something that has long been conceived and has a double shape here – the twin of masculinity and femininity, working together in a carefully considered work.

Sometimes, people only see one aspect of the matter they are interested in when questioning the Tarot, the Tower – La Maison Dieu Tarot reveals the existence of the second aspect, a more unseen possibility, symbolized by a character sticking out of the tower. The broader meaning of penis image of the tower also makes it a symbol of the male genitalia, and all of this is related to ejaculation.

We can also see an implication here is the great movement of the earth, an earthquake or another natural disaster. The main message the Tower – La Maison Dieu Tarot can bring is: stop looking for God in the sky; find Him on Earth.

IV. When the Tower – La Maison Dieu Tarot speaks up

“I am the temple: this whole world is an altar that I worship. My life, like yours, with every heartbeat, proves that this world is sacred, that the body is a lively celebration, and life is a never-ending work”.

“With me, you will know the joy, which is the key to the divine. I am the life, the transformation and rebuilding, the flame and the energy of every creature, of all matter and spirit. If you want to step into me, you must be happy, tossing into the fire the childish, painful or fearful feelings, and ask yourself every time you wake up: What will I celebrate now? I am a great joy of life, I am a wonderful and never-before-seen disaster”.

“A defensive crown once isolated me from the world. A button of the old words covered my mind, and clouds of dense, withered, hardened feelings darkening my heart and prevented light from leaking out. A thick cloak of desires turned my desire for life into a prisoner. I used to be a body without God, destroying myself in the flames of my own existence, my ego turned into a prison”.

“Self-despising, isolating myself, believing that protecting my own inner territory that belongs to me, who am I in the shadow of this tower? What am I the owner of? How is my appearance, is the impersonation? I am nothing but a thin air of selfish darkness”.

“And suddenly, from both inside and outside, an unknown power appeared, and a love that saved all lives. My mind was open and so did the bottom of my heart. The energy source of Heaven and material flow through me like a storm. I know the burning in the ground, see the light from the center of the universe. I received the vibrating cosmic rays; I am no longer a tower but a guide”.

“Then, the joy of unity broke out. The high lowered down, and the low raised. Like a queen bee, I began to produce happy creatures. God is in me, and I am just a revered material. I knew that I could burst, that each of my bricks would move through endlessly like birds. I know that everything imprisoned in the matter will flow through me. I am the central pillar of the cosmic dance. I am simply a human being absorbed in its original energy”.

The Tower Shadowscapes Tarot brings a sudden and unexpected change. In one minute you have it all and then it disappears. Therefore, we cannot fully grasp the literal images of the Tower.