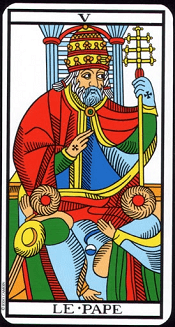 I. Overview of the Pope – Le Pape Tarot

The Pope – Le Pape Tarot carries number 5. This number grows from a perfect foundation in reality (no. 4) to take on a goal beyond its status. The Pope goes one step further than the Emperor; he created a bridge to make it come closer to the ideal. When acting as a teacher or pope, he obeyed the upper realms, Heaven, and was active in the lower realms, Eden. What he received from the upper realm, he passed down to his apostles.

Similarly, he passed on his students’ prayers to the Holy Spirit and thus, connected Heaven and Eden. We can say that he represents the interference of opposites, the center intersects the upper and lower, left and right. And so, he is a cyclical position between these different extremes, letting them communicate with each other through him.

On the positive side, the Pope is a teacher, an initiator, a guide, who defines the purpose of life for us. The back of his seat has steps like a stair; it can be said that he connected, by each level, body with the soul. His three-level cross implies that he overcomes the physical world – including sex, emotions, and intellect – to create unity. Similarly, his four-tier crown represents four authorities of an individual (body, sex, heart, and brain), which peak at a single point at the top, a small orange circle that touches the card frame: inner unity.

Just like the High Priestess, the Pope – Le Pape Tarot’s talent is to implement divine unity and teach it in the best possible way. The green clasp on his neck represents a point in the circle, meaning a personal entity containing a Core Nature in the center of his life. It is from this non-personal principle that he receives and transmits his teachings. We can also see it as a representation of the enormous concentration that the Pope must achieve to become the person he is today.

Each of his hands has a cross, symbolizing his act of reverence and devotion. His left hand, with a large cross, is light blue like the Hermit. This can be seen as a sign of high spiritual comprehension in action, and, if we interpret this color as a glove, an implication of Christian practice supposes that the gloved hand of Cardinals no longer belongs to him but has completely become the pure tool of the divine will. His right hand is skin-colored; it is reminiscent of the connected role of the Pope, the mediator of opposition forces. Through the act of closing the index finger and middle finger together (wisdom and heart), the Pope – Le Pape Tarot blessed the Incarnate world.

His white hair imbued with purity, but the red pin tells us that this is an active purity. Part of his beard is also white, but the area around his mouth is light blue as if to say that the Pope’s words were received (blue is the reception color). We can also see it as a sign of what must not be uttered: the master or the teacher, the priest or the prophet, the Pope cannot transmit everything; part of what he taught was kept private and could not be said.

Two apostles, also known as monks, accompanied him. We should note that this is the first card in the decimal string that appears more than one human being. Until this card, the characters only appear on their own or with animals, symbols of the force of instinct or spirit. But the Pope could not exist without the apostles to increase faith in his sermon. These two friars represent two different lines of concept. We can see the direction of their hair is completely opposite. The hair of the apostle on the left, who was lifting his hand as if to ask something and lowered the other hand, rotating clockwise. The Pope did not look at him.

Perhaps, this apostle is making a mistake: the direction of his head shows the clumping, going backward, different from the evolution of the right apostle. Maybe, it represents what called Dry Way in alchemy, of learning and effort. The right disciple, on the other hand, is receiving direct guidance from the Pope through the cross that touches the top of his head. He represents Wet Way, of direct reception, enlightenment, and revelation. His bald head rotated counterclockwise, and his hand grabbed a strange object: a short sword and bilboquet (Kendama game), and the explanation of it will be endless.

These explanations inspire us to consider the negative aspects of the Pope: the hypocrisy of the guru, the greed of wealth, the violent father, the unfair teacher, the hypocrite, depraved man. The Pope – Le Pape Tarot, like all Arcana, has its dark side. There are strong foundations for questioning the mysterious and obscure shapes hidden beneath his belt, challenging his sexual instincts and power preferences.

But it can be said that he is imparting the faith that he has received to mankind. In contrast to High Priestess, the Pope operates in the real world. We can say he found support from the temple, where the door was closed, to come out to the public and convey his experience of God to everyone.

The Pope – Le Pape Tarot can represent a boss, a teacher, or a guide, but also an idealized father figure (apostles, therefore, will represent his children), a married man, a saint. He also represents communication, connection, marriage, and all the means used to communicate. As a bridge or pope, he evokes a guided communication and knows where it is going/what it is headed for.

After all High Priestess’s accumulation that prepared for birth, the unquenchable explosion of Empress, and the stability of the Emperor, the Pope brings an ideal. While maintaining a part of the material world, he pointed out the path to an idealistic aspect firmly.

IV. When the Pope – Le Pape Tarot speaks up

“I am first and foremost, is an intermediary for myself. In the midst of my highest spiritual and instinctive nature, I chose to stand where they interacted. I am ready to serve the communication between the noble and the lowly; my mission is to connect the opposites. A bridge is not a place to stop but a place to go through. It allows for the recirculation of the creative powers of the marvelous phenomenon we call life. Not by isolating itself but by choosing all possible ways to inform”.

“I am the embodiment of blessing. When you meet me, you are facing a mystery. Being controlled by God, even the smallest gesture I create has divine dignity. Being ignored by the spiritual will, I learn to eliminate things that are obstructing my ways of communication, even the traces of my existence. I embark on nothingness so that God will fill me. I was silent for Him and only He could speak. I expelled all my words from my mouth; I buried my heart in peace and away from all desires, spent it all just to love Him, and I removed everything in my notion – even including the idea of eliminating my ideas”.

“In me, there is the same order of the universe. I am an empty and invisible shell that transports light according to the will of the wind. I put myself between Heaven and Earth, I persuaded residents there in the hope of bringing them to the limit. For everything rooted in matter or mind, I told them about the supreme being who gave life to inanimate objects. It is through me that mundane bodies rise to the level of continuity in brilliant fireworks. It is through me that the angels of energy descend upon the cold material and dissolve it into the waves of heat”.

“I hate every curse. I bless everything I hear, everything I see, everything I feel. I summoned love like a bird flying to a horizon that was not measurable so that it could land on the small and petty little part of the heart. So what can I do for your quarrels, difficulties, and pain? I make them submit to me and pray. Let me integrate into you: I will bless this world, including your troubles”.

“Please accompany me on the path to fulfill this mission, awaken the power of the divine. Your smallest gestures and your smallest actions will become sacred. You will know the feeling of the person who did not speak for himself“.

“The cross in my hand is not a tool to command. It is a symbol of my joyful destruction. I calm down my desires, turning these voracious wolves into swallows chirping to welcome the dawn. I turned the screaming ocean oppressing my heart into a sea of milk, calm and sweet like the one flowing in the Virgin’s breast. Those who are thirsty can come here and drink from my soul. I never refuse anyone. I am the door that any key can open”.

“He, who has entered my soul, can reach the farthest limit of the universe and the end of time: I am the final border between words and unimaginable things”.

The Ancestor Wildwood Tarot has a human body and a deer head. She put on a cloak made of deerskin and evergreen leaves and stood at the gate to The Wildwood.

The Hierophant Rider Waite Tarot is a very meaningful card. This tarot signifies that you aspire to follow the typical norms and limits of a typical orthodox approach.

The Hierophant Linestrider represents traditions, hierarchies, and their organizations and values. Administered by the Taurus, Hierophant is a symbol of the need to comply with laws and steadfast ideas.

78 Tarot Card base on Marseilles Tarot