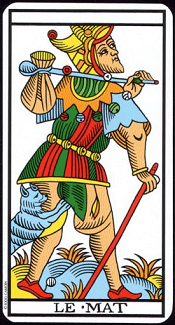 I. Overview of the Fool – Le Mat Tarot

The Fool – Le Mat Tarot does not have a number but a name. It is the only card in the Major Arcana that is not defined by numbers. The card represents a boundless source of energy, complete freedom, madness, confusion, chaos, or even the urge to create basic creativity. In traditional card games, the Fool is portrayed by characters like the Joker or unusual characters/cards that can represent any other card, at any time without matching any of them. The Fool’s keyword phrase is “All roads are mine”.

This card gives an impression of energy; through the card, we see a character striding steadily, wearing red shoes and carrying a red staff with every step. Where is he going? Is he going straight ahead? It may also be, but it is also possible to imagine that he is performing endless cycles with his staff. The Fool describes the traveler who is always wandering around the world without any binding or nationality. He could also be a pilgrim on his way to the sacred place. Or, suppose in the simplistic sense that many Tarot analysts talk about him, he might even be a wandering madman whose aim is to destroy himself. If we choose the most favored interpretation, we will see the Fool as an individual that separated himself from complexities and assessments, who was not bound by any taboos because he gave up all of his needs. He is an enlightened being, a God, a giant who draws a source of immeasurable power from the flow of energy.

The leather bag of the Fool is lit from the inside by yellow light. The stick on his shoulder was light blue and had a head with the shape of a spoon. It is an absorbing axis that brings the light of knowledge, essential things, and a useful foundation of experience. A small green leaf which is the symbol of eternity, hidden in the hand holding this stick.

The Fool – Le Mat Tarot is also a music lover because his outfit is decorated with small bells of the clown. It is not difficult to imagine that he plays the music of the universe – the harmony of the universe. The symbol of the creative trio can be found through some details of his outfit: his stick has a small triangle of three dots; and is a white circle divided by three lines on one of the clown’s bells. We also easily recognize the Trinity or the first Sephirot trio of Kabbalah’s Tree of Life, even the three basic processes of life: creation, conservation and vanish. Therefore, the Fool’s movement is guided by sacred or creative principles. The road gradually turned light blue when he put his foot on; he brought to the ground the purity and awareness that he had canonized when wandering through it.

The animal follows the Fool, perhaps a dog or a gibbon (two animals imitating people), laying the bottom leg of the spine, at the point where the Hindu tradition places the nervous system that focuses on the influence of the earth (Muladhara chakra). If the Fool – Le Mat Tarot is a blind man, his pet will lead the way, but here, he is the one who goes first, like the Vision that guides the Self. The childish ego has been tamed, and no longer need to coax to curb its aggressive nature; it has achieved an effective level of maturity to realize that it must follow the Essence of Nature and not impose its whims on it. This is why this animal, which has become conscious, has a light blue color. Because it is now the Fool’s friend, it cooperates with him and pushes him forward.

Half of its body is outside the frame of the card; the fact that it follows behind the Fool makes us think that this animal also represents the past. That is the past does not hinder the progress of energy towards the future.

The Fool’s outfit has a red and blue color. In essence, his inner side is an animal and a plant. But his light blue sleeves hinted that his activity, symbolized by his arms, was raised, and the yellow hat carried the light of wisdom. Two crescent moons can be seen on his hat. One of them is light yellow and is bordered by an orange circle, facing the sky. The other half, placed on the red sphere at the end of the back of the hat, facing the ground. The red moon represents the total gift of action, and the yellow moon represents the total perception of Consciousness.

The Fool awakens a huge energy boom. Wherever the card appears, it carries this immortal impulse along. If it is aiming for a card, it will fulfill that card with its creative energy. If it is getting out of the previous card, it means that it is leaving a position to place its forces on a new project, a new position, or a new relationship. Therefore, it represents liberation, a fleeing, hiding (material, emotional, intellectual, or sexual). In other words, this card poses the question of recognizing the reader’s energy movement and aims at the goal that the reader is applying his/her power.

Sometimes, the Fool – Le Mat Tarot represents madness or inconsistency when considering being a separate person – and, of course, a pilgrimage, a journey, a force moving forward. The question is, Is it necessary to know the position? The Fool has no personal interest in this matter.

This card, playing the role of energy breeding, will strengthen, nurture or appropriate the surrounding cards. The Fool is a true reflected image, which can also be the skeleton of the Minor Arcana. The Fool shows us that the ability to act can also be activated through the interference of madness and death.

IV. When the Fool – Le Mat Tarot speaks up

“Do you know that changing consciousness can happen at any time, that you can suddenly change your perception of yourself? People sometimes imagine that getting down to the business is meant to win against others. What a mistake! If you want to act in this world, you have to explode with the awareness of self-being established and marked from childhood, and not to change. Let’s extend your boundaries immensely and do not stop”. “Let’s enter the state of samadhi. Let yourself be possessed by a stronger sense of perception than your own and energy that is unaffected by humans. This is not a matter of giving up consciousness but about allowing the original spiritual passion, already in you, to be liberated”.

“Let’s stop dealing with yourself, stop observing yourself, be an actor in a pure state, an active being. Your memory will stop recording reality, action, and uttered words. You will give up all the concepts of time. By now, you have been living on an oasis of reason, ignoring all the living forces and other energies. The landscape is spreading in front of you. Let’s become a landscape in it with the unconscious ocean”.

“Then, you will know the state of supernatural, in which no action or accident is missed. Space is no longer a concept; you will become space. You will not have the concept of time; you will become that phenomenon when it happens. In this state of extreme expression, every gesture, every action is perfect. You cannot deceive yourself; There are no plans or any intentions. Only pure action in the eternal present”.

“Do not be afraid of releasing instincts, no matter how primitive it is. Leaving reason does not mean denying the spiritual force: be open to the poetry of intuition, with the surprise of telepathy, with the voice that does not belong to you, with the words that come to you from another dimension. Let’s watch them blend into the endless space of emotion and let the endless creative force be bestowed upon you by emotional energy. There is no more looking at the body through the concept of the past, but the subjective awareness of the current vibration.

You will see your body stop paying attention to the requirements of rational concepts and allow them to be moved by forces belonging to other dimensions, by the Synthesis of reality. A captive animal will move like rational awareness. Meanwhile, the free movement of an animal in the forest can be compared to the state of samadhi. Caged animals must be eaten at designated hours. For the action to take place, the reason must be converted into words. Wild animals live by themselves and never have any illusions about food. The actions of an individual in the state of samadhi are not motivated by what that individual learns, but are inspired by what it is”.

The Fool Rider Waite: As the card number 0, the Fool starts the Major Arcana, but it is a bit isolated from the other cards. In the Middle Ages, clowns were the one who did not follow the rules like the other. He can observe and then make people laugh.