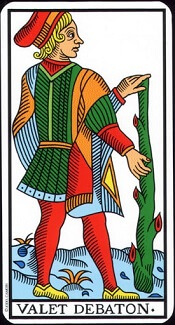 I. The upright meaning of Valet De Baton

Being drawn with a tilt angle, the Knave of Wands placed both hands on a huge wand. Will he pick it up? Or will he let it lie on the ground? This is the hesitation between doing and not doing, creating and not creating, or following and not paying attention to one’s desires. The energy source in this card is not shaped and needs to be transformed. This may be a gender hesitation, an innovative project that needs to be improved and done at the same time until completion, etc.

Valet De Baton is a free spirit that represents change and new starts. He has a real passion for life, although his understanding of the world is not yet fully developed. He has not yet been crushed by the burdens of the material world, he comes and goes as he pleases, and generally, he encourages change wherever he goes. This card acts as a catalyst that inspires changes that would seem impossible in any other situation. The appearance of this card indicates that you will be caught up in a creative agitation, ready to express yourself, in the process of making some kind of discovery or arrive at the dawn of a new phase of your life.

This card represents the sudden creative spark that against you, abruptly and unexpectedly, and brings you to the perilous path. Thus, he encourages you to express yourself and manifest your individuality with an apparent lightness. Let’s listen to your intuition and follow your creative impulses, even if you fear to preach in the desert. With perseverance and lucidity, even the young ideals of this card can turn into a creative force which is ready to change the world. This is why it means that you must remain positive and spontaneous but without impulsiveness. Your enthusiasm impresses others, but if you become impatient or quickly get angry or tired, you will put your surroundings on the sidelines and waste time on your projects.

With Valet De Baton, you are inclined to commit yourself thoroughly. You are so enthusiastic or passionate that you take the opportunity to start a new journey or a new project before you even know where it will take you. For now, you do not necessarily have a project that really stands out and know where you are going, but you know you are excited about the possibilities. You like to invest in these activities and projects. You like to freely choose what you are going to work on today, hoping it will be different from what you worked on the day before.

Often, this card is a messenger who brings you unexpected, exhilarating news, original information or a welcomed surprise. This can be the birth of a child, a great idea which is blown by a friend, or an unusual opportunity to “change the world” as participation in a community project. This news is almost always positive and welcomed because it is often associated with change and creation.

Valet De Baton can also represent someone you know or who is about to enter your life. He is a trusted person who is in the same direction as you and who will do everything possible to help you. His intentions will be honorable and sincere. His appearance in your life is to bring about change, to help you to see the world from a new angle and to guide you to new perspectives. Although you may consider him to be an immature or childlike presence, he has a lot to offer you if you open up to these possibilities.

The negative aspects of this card include clumsiness, the obstacles for sexual energy or creative energy, lack of vitality, or even violence.

The reversed Valet De Baton means that you have tried a few new ventures or new projects, but these have not been particularly successful. Maybe, you had the idea to get into a new hobby or create a new project, thinking it would lead to better things and wider horizons, but you soon realized that your approach was inappropriate. You may have begun to realize that you did not focus enough on your goals and did not achieve the desired results.

Fortunately, you will not go too far, and you can easily limit the damage. Sometimes, these failures can be useful for testing new terrains and exploring what might or might not work for you. You may also find that your desire to start something new has been negatively affected by the complexity, obstacles, and resistance, which has caused a lack of motivation and certainty on the way forward. You may also be concerned that your project or idea is really working and mechanically burdened with more responsibilities and problems.

The reversed Valet De Baton can represent an immature person with a disturbing self-image problem. It can be a malicious and aggressive person or a person who is in distress and is always considered a victim. He/she is someone who never has anything good to say, who is always pessimistic and who always criticizes everyone. This person drains all of your joy of life and your confidence. It is often a superficial person, lazy and arrogant, unwilling to make even the slightest effort.

“I am strong and I am simple. I firmly pointed my path to the same turn. My natural energy source is accumulated through the giant green wand symbolizing me. That aspect of my nature can be seen on cards number 2, and the rest of me, cards number 3, I am willing to act without purpose: acting for the joy of action, like a violent explosion. My arms folded with two different intentions. Or I will continue to store my energy, that is, I will stick the wand to the ground, or I will raise it up and swing a blow to the unknown. For me, this is creativity: a strong swing in the unknown, a swing that will change my life, and then I will not be the same anymore.

This is why I hesitated. However, my face is facing the right side of the reader. It means that I promise to go ahead. The creative action will be announced, the seeds will be prepared, and war is threatening because my actions can also be inspired by number 3 in the form of the Major card XIII, La Mort Tarot, and destructive. In that case, I am no different from a bomb waiting to explode”.