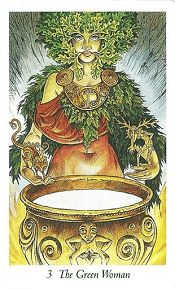 I. The position of The Green Woman Wildwood Tarot on the Wheel of the Year

The Green Woman is located in the middle of the summer solstice – June 21st. The card is of Fire element and closely related to midday. She is a manifestation of the feminine solar energy on Earth.

II. The Description of The Green Woman Wildwood Tarot

The Green Woman is the drunken yeast of nature. She wore a crown of ferns and wild roses. She uttered beautiful words of life. Her expression is very calm and relaxed but exudes elegance and authority. Around her neck, she wears a Celtic gold necklace that symbolizes the sun all year round. While the yellow amber jar in front of her contained the milk of love and nourishment, the Sheela – Na – Gig engraving on it spoke of the power to sustain women’s life. The Green Woman is the symbol of the wood in midsummer. Here, among the luxuriant foliage, birds and other little animals in the wood have revived and together build a nest. They create an ecosystem among the branches as a safe haven for fragile and innocent creatures.

III. The Meaning of The Green Women Wildwood Tarot

The Green Woman Wildwood represents the feminine prototype of wildlife and green energy. She embodies the feminine solar energy, along with the generosity of Mother Nature. She was the goddess of the holy land, the Supreme Being – who tested the courage of newcomers. Then, she bestowed those who conquer the crown, love, and possessions of the Earth. She poured down on earth the brilliant sunshine between midsummer, touched all living creatures, and blessed them in infinite life energy.

The Green Woman is a complex, delicate but also extremely exciting symbol. She enthusiastically interacts with anyone who wants to understand the nature and myths about The Wildwood. She brings sacred blessing and fertility to the land and the creatures that live on it. She formed a deep bond with those who seek harmony with The Wheel of The Year.

In the Arthurian tradition, The Green Woman recognized the kingship of King Arthur by giving him a holy sword, then conferred him as protector of the Holy Sanctuary in England. She is sometimes described as a woman of lakes, who raised King Arthur and the young heroes Lancelot. In other legends, she was the bride of flowers, whom the great knights of King Arthur were always looking for. She brings deep attachment in marriage and generously bestows joy to everyone. In everyone’s heart, she played an extremely sacred role, motivating individuals to enter the kingdom of The Wildwood.

IV. The guideline of The Green Women Wildwood Tarot

The Green Woman appears at a time when people and the universe are in a state of nurturing and enveloping, learning, and enlightening wisdom, love, and reproduction. The Green Woman possesses the supreme divine power of the Earth, showing us how to understand and be close to nature. However, blessings often come with responsibility. Remember that there is a noble, generous, and gorgeous soul that always lives in you. That soul always wants to light the soul of those who need instruction and healing with the breath of life. Actively learn from beautiful souls, accept your true self, and be one with our world.

V. Keywords and extensions of The Green Women Wildwood Tarot

The mother of the universe, Princess Guinevere, Goddess Isis, in the heart of Mother Nature, Bride of flowers, Maid Marian, Lady of all species, Wild woman.

The Empress Thoth Tarot is actually the symbol of the Great Goddess, the mother of the elemental authority of all life. She is a symbol of creative formation, through which thought has not yet become a material mother.