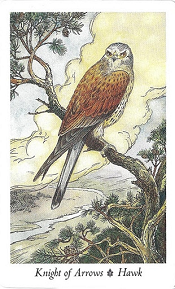 I. The Position of Knight of Arrows Wildwood Tarot on The Wheel

Depart from Imboli day and head towards the Spring equinox point.

II. The Meaning of Knight of Arrows Wildwood Tarot

Being agile, elegant, and the owner of the air element, the Hawk is a symbol of vision and power. The ability to fly and nest in high positions as well as observe and hunt from great heights brings this majestic and mighty animal a powerful adoration.

III. The interpretation of Knight of Arrows Wildwood Tarot

As an agile messenger of fate, the Hawk will help and encourage you to peek through doubts and uncertainties about the nature of the problem. Be quick and subtle, use your common sense to push things forward.

As someone in your life: The Knight is a champion, a pioneer who defends and maintains beliefs, for the benefit of him and others. He has a clear opinion, always making himself an advocate for those who have no voice. This is a friend who is never bored and is always dynamic, full of energy.

As an aspect or process: Be cautious as you go through this. Precipitation. Heroism. Struggling with obedience or ideological rebellion. Use agility as a solution. The cultivation of hatred. Trigger someone’s anger.

As an event/situation: The root cause of the problem, something you endorse. A quick reversal of the chain of events. A decision must be made. A gathering of like-minded people. Revolutionary inspiration. A fierce reaction or rebound. Torture in thought.

Question: Deep down in doubt, what are you steadfast in your belief? What are you fighting for? Where did you get it wrong?

IV. The guideline of Knight of Arrows Wildwood Tarot

The power of the Queen is now championed by the lightning-fast Knight of Arrows: Hawk. High on the hillside, Hawk sits on the twisting branch of a pine. Far beneath him, a river rambles its way through the countryside and cloud disguises much of the landscape behind him.

Take a close look at this cloud, it radiates as if from the breath of a dragon. This is probably the Breath of Life that we saw from the mouth of Ace’s White Horse? Since he is the master of the air element, it seems that Hawk should be so fortunate. From his high vantage point, Hawk can see clearly and move with speed and assertiveness. But unlike the King, he has less experience to draw on, so be prepared (and get ready) to learn new things and change your mindset as a result.

Of course, the Knight of Arrows is a hawk, depicted perching on a relatively bare branch against the smokey background, high above the ground and a river; it turns its back to us, but it is also facing us. By using the typical Celtic lore of the deck, the Hawk, like all or most birds, is a messenger between Sky and Earth, or rather a messenger between gods and humans. The hawk’s physical characteristics mark it as an assertive predator with foresight: it is a bird known for its predatory strategy of gliding in the field or wherever prey may be available, then dive when it detects prey.

However, the Hawk card goes beyond “youth with sharp intelligence”. The image of the Knight is often associated with inexperience and reflects youth, but can also, especially, in this case, represents instinct and intuition or loyal service to a greater character or purpose. Hawk, for its natural symbolism as a visionary predator, probably symbolizes natural instinct above all other interpretations.

Be mindful that your actions can be misunderstood – Hawk’s hunting skills are admired by those not on the receiving end, and feared by those who are! Are you prepared to take some time from your day today and spend it with Hawk? Climb high onto the hillside and feel the still-wintery winds pluck at your hands and face. For all that it stings, you are exhilarated and refreshed from the climb.

The wind makes the old pines creak and Hawk elegantly shifts position to maintain his balance. As he lifts gracefully and effortlessly into the air he pulls higher and higher until you can barely see him in the sky. Then he folds his wings and falls, like the supreme arrow that he is, traveling at lightning speed down to the valley floor where his talons quickly snatch their prey and he returns to his branch, bloodied and victorious. Where are you endlessly rotating? Now is the time to fold back your wings and dive!

V. Keywords and extensions of Knight of Arrows Wildwood Tarot