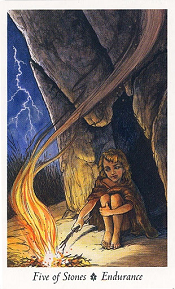 I. The Description of Five of Stones Wildwood Tarot

A normally dressed child sits at the cave door, looking out into the dark sky divided by light. A small burning flame flared in front of him, and it is because of that light that four deep cracks in the walls of the cave are found, which are five great stones.

II. The Meaning of Five of Stones Wildwood Tarot

We need to use our inner strength and courage to protect ourselves and survive the challenges of life. It may also mean withdrawing from griefs of loss and focusing on emotional recovery.

III. The interpretation of Five of Stones Wildwood Tarot

Of all the qualities a spiritual warrior or seeker needs in the journey of life, the spirit and a will to endure are of the utmost importance. As one of the kendo masters, Bob Anderson, said: “There will be trials, and there will be harsh challenges. Life is a contact sport and there will be bruises.” The desire and will to survive and recover from failure are extremely important and necessary.

History also proves that when, in 1306, Robert the Bruce stayed in the cave for three months of winter, while being hunted by the soldiers of King Edward I in Scotland. It was a bad time in his life when he was defeated in battle, he had to witness his brothers executed, and his sister taken away. Bruce’s only companion in the cave is the spider trying to spin continuously in the windy cave. Over and over again, the incoming wind tore the web to pieces. But in the end, the spider succeeded in its expedition and the web was able to withstand the storm. Maintaining a resilient will and maintaining a sense of humor is of utmost importance to our health, coupled with the belief that it will light up another day filled with new opportunities.

IV. The guideline of Five of Stones Wildwood Tarot

A child sits gathered at the mouth of a cave while a lightning fork of a storm flashes outside. He pokes at the fire with a stick as the wind whips the smoke out into the darkness. There is a saying: “Ships are safe in a harbor, but that is not what ships were built for”. Therefore, we too must develop our powers of endurance during life’s raging storms and create safe havens to help us through difficult times.

Stones in this deck are linked to Pentacles and Coins in other decks, Five of Stones in the world of Wildwood is the equivalent for Five of Pentacles, so it could represent anything from staying put in a job and riding out the storm, to not spending any more cash than you have.

There is also a sense of waiting – perhaps for dawn after the long night, of some inner strength and courage to be by yourself in the dark night. It could seem like a very low point but it is only for now – dawn will announce a new day.

Today, the Five of Stones askes you: What storms are raging in your own life? Where are you enduring? What fuels your courageous fire? What else might you have to endure in order to survive the darkness?

V. Keywords and extensions of Five of Stones Wildwood Tarot