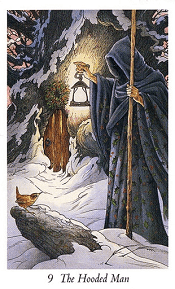 I. The position of The Hooded Man Wildwood Tarot on the Wheel of the Year

The Hooded Man stood at the winter solstice point on December 21, along with the earth and the sun in the night. This is the time to be alone and contemplate life. This card describes the gates of death and rebirth, deep inside the Earth.

II. The Description of The Hooded Man Wildwood Tarot

There was a hooded man standing alone in front of a great Oaktree. It is mid-winter now. Snow covers a thick layer on the ground and branches. The Hooded Man Wildwood wears a blueberry cape. On one hand, he holds a sturdy wand, and the other holds a lantern to light the way. In the distance, within the great Oak tree trunk, there is a gray and moss-covered wooden door. Pieces of burning wood give off warm rays and creep into the dark night. The Great Oak appears in a way that is full of welcome as a refuge in the cold air. On the door, there is a round wreath of evergreen leaves. On the cold stone floor, a linnet is observing and waiting for something.

III. The Meaning of The Hooded Man Wildwood Tarot

After the difficulties and tribulations when confronting the ancient forces, we need a moment of calm and reflection on life. However, the intricate, complex battles in life can make us feel confused and turned upside down in the search for esoteric knowledge.

The Hooded Man (The Hermit, Robin – i – The – Hood, the hermit in the deep forest) will bring persistent light in the middle of the winter as well as use his wand to dig deep and accumulate knowledge. His lantern illuminates the darkest frightening crises in every soul, repels misunderstandings, and opens the way to the door to The Great Tree. He knows that knowledge is the light and can only be cultivated through self-sacrifice and self-discipline. He points out the secrets of the deep forest and helps those seeking ways to cultivate their minds to go deeper into the forest. The Great Tree is one of the symbolic powers of the forest, which contains countless secrets and treasures of erudition.

The Hooded Man survived on the continent through the cold, empty winter thanks to his intellect and will. He takes advantage of the climate to consolidate his strength. He creates his own food and nourishes himself. For those who are pursuing his path, who are now tired and in need of comfort, he waits to appease them, empower them with his intellect and his advice.

On the cold ground, the linnet, the sacred bird that symbolizes kings, appears as a prophet, a keeper of mysterious wisdom. The linnet is also a symbol engraved on the ancient Totem tree. It has proven itself to be the highest-flying of all animals, by jumping on the back of a great eagle. From then on, it was known as the king of birds. It reminds us that even the smallest creatures of the earth can reach the highest height and look beyond the horizon.

This is the time when the mysterious rebirth inside and outside the universe takes place, far beyond the confines of human civilization or moral standards.

IV. The guideline of The Hooded Man Wildwood Tarot

The Hooded Man’s time has come. Whether he appears as an introvert, an instructor, or simply a fleeting thought, you will understand that now is the time to postpone and rest. After a journey through the Wildwood, there are so many emotions and experiences that you need time to be absorbed. This will enable you to understand yourself and the universe around you. In each person, The Hooded Man has a different appearance. However, whether through meditation or hiding in the mountains, through prayer or resting in a secluded spot, his light will always light up the path to the center of The Wheel of The Year of an endless life.

V. Keywords and extensions of The Hooded Man Wildwood Tarot

The lonely road, The last truth; The small sound of stillness, meditation, and conversation with yourself; Light of understanding, Internal depth.

Hermit Thoth Tarot card focuses on exploring the spaces of consciousness. By doing so, he delves into the mysteries and the deepest abyss (Hell Hunter). This is not a simple rationalism problem.