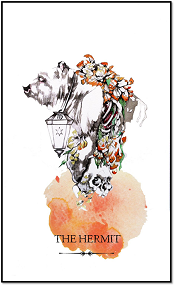 I. Keyword by The Hermit Linestrider

II. Meaning of The Hermit Linestrider

The Hermit Linestrider talks about introspection, introversion, and isolation. After a few drawings with different animals, the bear is chosen also because it is associated with the image of caves and hibernation. This bear is wounded, but the wound is bringing a new life.

The Hermit can tell when a time has come for self-care and continued learning/development. This card is related to the Virgo sign and the number 9, and the star in the lantern is a six-pointed star (Solomon’s Seal, symbol of wisdom).

III. The Hermit Linestrider in a Tarot spread

When spreading cards, Hermit Linestrider often represents fortune-tellers. Sometimes, he represents another important person close to you, so believe in your intuition and let it guide you. For instance, when reading cards regarding emotional problems, Hermit may appear as a fiancé or lover feeling aloof, emotionless, and self-contained. Hermit in a future position may mean that your current actions have led you to loneliness.

Be careful when the Hermit Linestrider combines with the conflicting Swords or Wands cards (5th and 7th cards), then it shows that your judgmental attitude and bitter words separating you from others. When combined with the King or Queen of the Swords suit, maybe the time to explore and research knowledge makes you need a state of solitude. Hermit pairing with the Star is one of the best combinations you can get. They show you are on the right track and the gods are smiling at you. Isolating yourself and doing exactly what you need to grow and fight for is entirely possible. When Hermit is combined with Two of Cups, Ten of Cups, or Lovers – you and your partner may be entering a period of a strong bond and a time secluded from the world. Hopefully, it is neither the result of a plane crashing into a mountain nor you getting lost on some deserted island.

When in the reversed position, the Hermit Linestrider may indicate that you are not currently spending enough time thinking, healing, and learning for yourself. However, on the contrary, the appearance of the reversed Hermit may signify that you are spending too much time concealing yourself and now it is time to step out of the cave and into the sun. You may be in danger of losing important connections with others because you neglected those relationships while hibernating.

In terms of work, the card reminds you that this is a very sensitive period where you need to calmly think in order to make the right decisions. If your job is going well, then you should prepare an alternative plan for yourself, because in the future there may be some problems. However, when your work is still unmanageable, the card signals you are about to come close to success. If you are about to start a new job or project, you need to give yourself more time to consider all the difficulties and advantages in the next steps.

In terms of finance, this is not the right time to invest money in new areas or borrow from an outside source. If you are financially dependent on others, then you need to reconsider your overspending. If you want to lend money to others, the Hermit Linestrider warns you to examine more closely and should not let emotions dominate your decisions.

Regarding friends and associates, the card shows that you are very empty inside though you can have many friends. What you need is a soulmate who can confide in you. The Hermit Linestrider advises you to open your heart so that others can understand you. Trust others, even when believing is accepting deception. You may get hurt, but there will be many others who will volunteer the idea of ​​trusting you. Regarding colleagues, you should try to make a connection to create relationships so that you can thrive at work, no matter how much you dislike them, they are the ones you work with. Just be upright and treat everyone properly.

Regarding the family, the overprotective care of your family makes you feel exhausted. You withdraw into your own world. Advice for you is to be brave to step out of your comfort zone, go out to the outside world to see beautiful things. In other cases, the Hermit Linestrider shows the help and guidance of the elders with knowledge in the family for you about school, work, or behavior in life.

IV. Message of The Hermit Linestrider

Like a six-pointed star filled in a lantern, the notion of the Hermit divides in two directions: within and outside. The card basically means withdrawing from the external world for the purpose of activating unconscious intelligence. We see this process depicted in an inverted triangle indicating “water” – as alchemists call it. But the Hermit also implies a teacher who paves the way into this process and keeps us on the right track. The downward triangle of fire is this special guide – that teacher could be a paranormal teacher, a psychotherapist, or our dreams, or even the spirit awakened from the ego.

Although the Hermit retreated from society, he did not kick himself out of humanity. In addition to his daily duties, he creates shelter and sometimes gives blessings to adventurers. The countless stories, especially in the myths of the Holy Grail, depict the Hermit as someone who gives wisdom to the knights to overcome spiritual afflictions. That is the dual image of The Hermit: illustration and guidance.

In many cases, dream analysts have found that daydreaming replaces the role of a therapist. The unconscious can recognize the Hermit teacher before Consciousness. The great 15th-century Qabalah, Abraham Abulafia, depicted three levels of Qabalah. The first is the doctrine of learning through semantic textbooks. Level 2 comes from the direct guidance of a private teacher; while level 3, the highest level, comes directly from the ultimate experience when combined with the Holy Spirit. The three levels are directly related to the Tarot, not only through the division into three lines of the Major Arcana but also through the specific three cards that form an isosceles triangle. Level 1 is The Hierophant; level 3 – 1 level below The Hierophant, is The Sun. However, level 2 is not the middle card corresponding to the Hanged Man, but The Hermit.

As a symbol of personal growth, the Hermit means that only when we withdraw from our external mess can we awaken the inner self. Those who split the Tarot in half with the Wheel of Fortune being center point will treat The Hermit as a deep pause before the Wheel of Fortune turns to level 2. When we split the Tarot into three rows of seven cards we get that recluse, and the Wheel itself are the steps towards the higher purpose.

We see the Hermit alone on top of an icy mountain. He left the sensory world to enter his mind. This view of consciousness described as this distant solitary peak actually conveys only part of the truth, or rather, an illusion. The mind is filled with symbols, inspiration, light as the love of the soul. But before we can conquer these we have to experience the tranquility of the mind in place of the noisy sensory world.

The Hermit also indicates transition. Through meditation, spiritual practice, or analysis, we allow the hidden parts of our psychology to speak to us. Then we will experience rebirth, first as an angel (the immortal part of the ego – beyond the ego), and then further, feeling more deeply as a free child plunge from the garden of past experiences. Currently, the path the wise old man was walking alone was warmed by a stiff gray cloak of stillness.

The lantern symbol leads us back to the point of view of the Hermit as a teacher. He lights the way, alluding to our willingness to lead and our ability to find our way if we can use The Strength Linestrider. We have seen the star as both a symbol of the Hermit and the light of the Unconscious, seducing us to discover its secrets. The deeper meaning is the purpose of resolving the contradictory aspects of life.

The meaning of the Hermit in spreading cards relates to both hidden sides in the card. On the one hand, it represents a withdrawal from external worries. A person may physically detach himself, but is not absolutely necessary. It is important that the inner transformation focuses on “receiving and practicing,” as Wordsworth calls mundane activities, to the demands of a human being. So it requires emotional seclusion from others in order to develop inner self. In connection with this purpose and with the image of the Hermit, the card depicts the certainty and ability to discern what is truly important in one’s life.

The Hermit Linestrider also represents help from a specific guide, sometimes, as indicated above, the mental guidance from within, but often a real person will help you discover yourself. Sometimes, we lament we do not realize the existence of such a guide. If the Hermit appears in a spread, then it is better to observe the people around you closely. In case you are helping others to understand themselves, The Hermit represents you as a mentor.

When the card is in reverse, we always reverse the meaning of retreat back to the internal. Along with the reversed meaning of the Priestess (fear in life), the reversed Hermit can also refer to fear of man. If you withdraw from society, the reality of your withdrawal is more dominant, leading to phobias or paranoid depression. As with the other Major cards, the negative and positive sides of The Hermit Linestrider depend on the circumstances. The reversed Hermit sometimes simply means that at that point the querent needs to get along better with others. While the card in the upright evokes maturity, the reversed Hermit sometimes refers to the childlike lifestyle as Peter Pan who clings to meaningless activities or behaves enthusiastically like children (a kind of spontaneity) to avoid responsibility for life.

Corresponding Associations of The Hermit Linestrider

The Hooded Man Wildwood (The Hermit, Robin – i – The – Hood, the hermit in the deep forest) will bring persistent light in the middle of the winter as well as use his wand to dig deep and accumulate knowledge.

The image in Hermit Shadowscapes Tarot card is almost analyzed in the companion book, a hermit holding a lantern in the dark, self-groping his own way.